Even as Covid-19 cases continue to surge, policymakers can take heart from the fact that a number of high-frequency indicators show signs of resilience, pointing towards overall economic recovery in the country. Moneycontrol takes a look at some of these economic indicators

Even as Covid-19 cases continue to surge amidst emerging signs of a winter spike in India, policymakers can take heart from the fact that a number of high-frequency indicators show signs of resilience, pointing towards overall economic recovery in the country.

In an interview with Moneycontrol earlier this month, Finance Secretary Ajay Bhushan Pandey had said GST and income tax collections pointed to a surefire recovery in the economy.

“Going by the current trend, the economy has recovered in certain areas and people have learned to live with COVID-19 following precautions and carry economic activities. The October collection of GST reflects the transactions made in September this year. We can get a sense of what has happened in October if we see the e-way bills figures. In October, it is 21 percent higher y-o-y. For September this figure was 10 percent,” Pandey had said.

Moneycontrol analyses some of the indicators which have shown substantial improvement since the lockdown, in some cases matching or even exceeding 2019 levels. 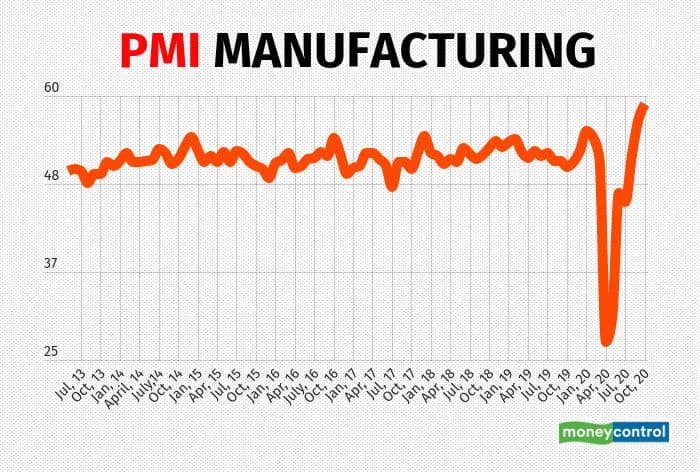 The index has perhaps given the biggest hope of an economic revival. The IHS Markit Manufacturing PMI rose to 58.9 in October, the highest in more than a decade, compared to 56.8 in September. Driven by robust sales, the pace gathered by manufacturing output - a crucial component of the headline PMI - was the quickest since October 2007, contributing to the PMI’s gains, the monthly report by IHS Markit said.

A PMI value above 50 indicates that activity expanded in a month over the previous one. However, it should be noted that the PMI is a month-over-month indicator, showing improvement over the previous month, and not over the previous year. In addition, manufacturers spent more on buying inputs in October too. The reopening of sectors took overall confidence to a 50-month high. The GST Collections crossed Rs 1 lakh crore for the first time since February 2020 and came in at Rs 1.05 lakh crore in October. This was 10 per cent higher than Rs 95,379 crore collected in the same month last year.

“When we analyse all these figures, we'll see that collection is recovering, and in certain areas, it is also going into the positive zone. We have to watch for next few months and then we will have a good idea of recovery and growth trajectory,” Finance Secretary Ajay Bhushan Pandey told Moneycontrol. 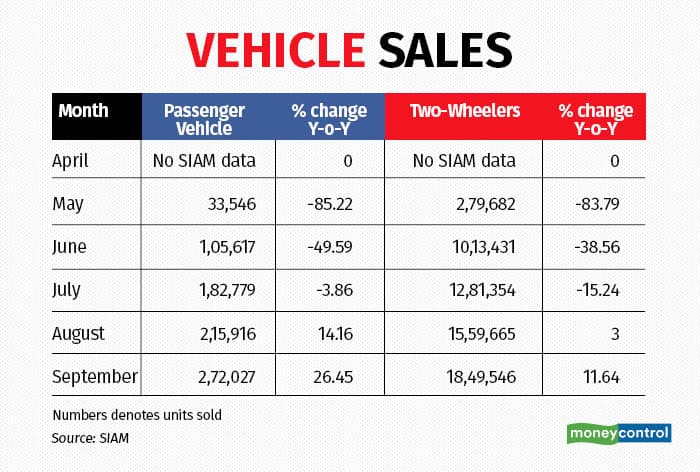 After no sales in April due to the lockdown, and negligible sales in May, vehicle sales gradually started picking up from June onwards. As per data by the Society of Indian Automobile Manufacturers, in June, while passenger vehicle sales were nearly 50 per cent down compared to June 2019, two-wheeler sales were down nearly 39 per cent.

The less steep fall in two-wheeler sales indicated that the rural areas came out of the lockdown in a much better shape than urban India, which saw the worst of the COVID-19 pandemic. The relative health of the rural economy is also borne by the available GDP data, as agriculture was the only sector which showed growth.

By August, with the festive season nearing, the trends reversed. Four wheeler sales showed a 14 per cent increase year-on-year, while two-wheeler sales increased 3 per cent compared to August 2019. Consolidated vehicle sales data for September showed an even greater pick up in sales.

Four-wheeler sales rose 26.45 per cent compared to September last year, while two-wheeler sales rose 11.6 per cent. The consolidated data for October by SIAM will be available by next week. However, data so far from Maruti Suzuki, Hyundai, and others shows that the there was a substantial festive season uptick. 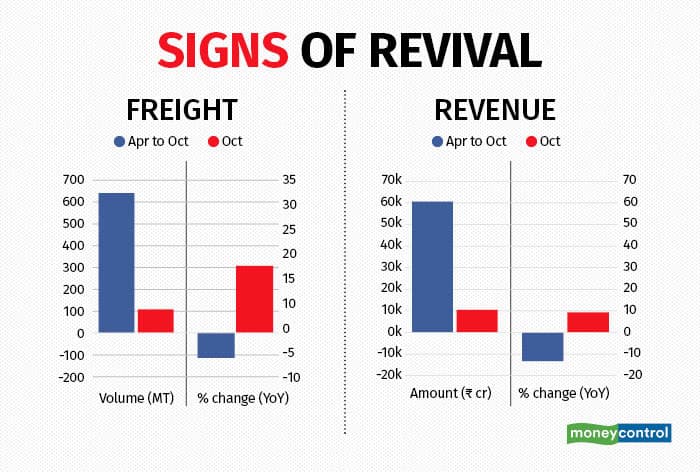 This is one of the most important high-frequency indicators that the finance ministry tracks. In October, the Indian Railways handled 108.26 million tonnes (MT) of freight, up 15.4 per cent compared to October 2019. The revenue from freight operations in the month also increased by 9 per cent to Rs 10,416.73 crore year-on-year.

The Ministry of Railways has said it arrested the decline in freight traffic to 9 per cent in April-September at 533 million tonnes, while till October end, that lag has come down to 5.7 per cent. The April-June quarter with 241 MT freight volume was a washout for the public sector monopoly due to the lockdown, registering a 21 per cent decline. The government announced a nationwide lockdown in March-end to tackle the spread of Covid-19 pandemic, bringing economic activities to a grinding halt. March data shows UPI transactions worth Rs 2.06 lakh crore, which dropped by 27 percent month-on-month in April. Corporate tax collections were also highly encouraging, at 85,749 crore. This was the highest this fiscal, beating the previous high of Rs 37,321 crore in June.

After housing sales fell in a number of cities during the nationwide lockdown in April-June 2020, the housing market too has shown signs of recovery. Cumulative sales across the eight biggest metropolitan regions in April-June stood at just 9,632 units. That has increased to 33,403 units in July-September, a jump of 247 per cent.