The RBI says the green shoots seen in the July-September quarter were fraught with ‘downside risk’ as India was yet to see a sustained reduction in CCOVID-19 cases
Arup Roychoudhury
Oct 27, 2020 / 07:43 PM IST

The Reserve Bank of India (RBI) on October 27 said the COVID-19 pandemic is certain to have a severe impact on the finances of states, especially their revenue collection abilities, even as expenditure commitments continue to rise as states are at the forefront of the healthcare crisis.

The RBI said the green shoots seen in the July-September quarter were fraught with ‘downside risk’ as India was yet to see a sustained reduction in daily COVID-19 cases, and parts of the world were seeing a second wave.

“It is increasingly certain that the slump in economic activity due to COVID-19 led lockdown will adversely impact states’ revenue collections,” said the central bank in its study of state finances and their 2020-21 budgets.

The report stated that the pandemic produced varied direct effects on fiscal conditions across states. On the one hand, fiscal pressures were intensified by expenditures surging and revenues collapsing, while on the other hand, fiscal sustainability risks were heightened by off-budget loans and guarantees. 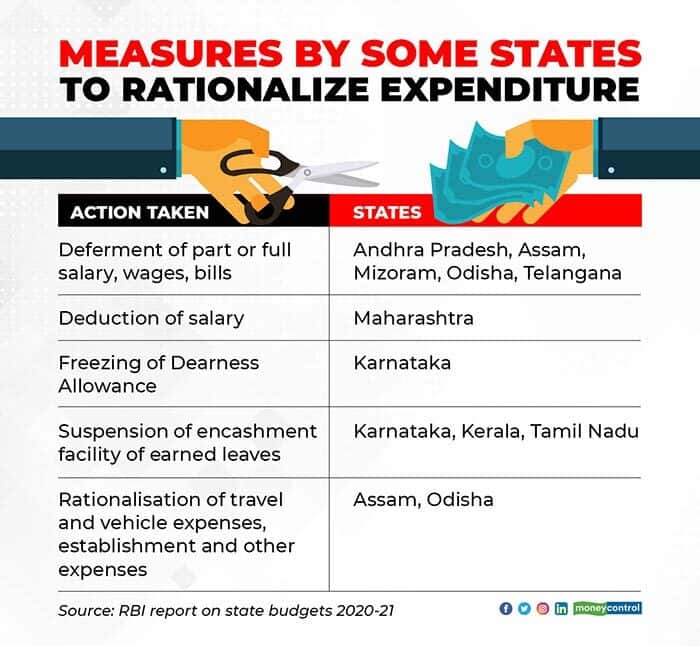 Measures by some states to rationalise expenditures under COVID-19 pandemic outlays.

The report said on an average, states forecast their fiscal deficit at 2.8 percent of gross state domestic product (GSDP). Since most of the states presented their budgets before the nationwide lockdown, that forecast will be revised to much higher levels.

“The direction of possible revision is evident from the fact that the average for states presenting their budget before the outbreak of the pandemic is 2.4 percent, while the average for the balance number of states that made post-outbreak budget presentation is 4.6 percent of GSDP,” it said.

“Fiscal stimuli have become circumscribed by the growth contractions themselves as they, in turn, have translated into sharp falls in government revenues. Meanwhile, income and health support measures have distended expenditures, substantially out of alignment with budgetary targets,” the report said.

“Even as fiscal space gets exhausted the second wave of infection has either arrived or may be imminent in several economies, forcing lockdowns again. Overall, uncertainty remains high, and even as the quest for vaccine intensifies with no immediate relief in sight yet, the prospects for the green shoots that appeared in the third quarter of calendar year 2020 is fraught with downside risks,” it said.

“With healthcare, social services and other critical aspects of containment being the responsibilities of state governments, testing, monitoring, and enforcing confinement and ensuring the continuity of provision of essential services has turned out to be a function of the digitisation base of states,” the report said, and added that some states had to contend with unprecedented levels of reverse migration, which added pressure on their finances.
Arup Roychoudhury
TAGS: #147 crore fine by competition commission of India. #Business #coronavirus #Economy #India #Reserve Bank of India
first published: Oct 27, 2020 07:43 pm