Hiring activity in India is slowly picking up, even as concerns over the second wave of COVID-19 remain, data from professional networking site LinkedIn has shown.

LinkedIn’s labour market update showed that between early-April to end-June, hiring increased by 35 percentage points. In April, hiring had slumped to a low of below -50 percent year-on-year (YoY), before starting to slowly recover.

The data showed that hiring sentiment stands at -15 percent YoY as of June-end. As risks of second-wave of infections emerge, some states have imposed lockdown measures again.

Also read: Here are the number of jobs lost due to COVID-19 lockdown

The analysis looks at the year-on-year changes in the hiring rate, which is a measure of hires divided by LinkedIn membership. The analysis was conducted for the period of February 11 to June 30, 2020.

In what could be an impact of the job losses and pay cuts, LinkedIn’s data showed that competition for jobs has doubled compared to six months ago. Here, the average number of applications per job posted on LinkedIn increased from around 90 in January to 180 in June.

Since jobs aren’t available in sectors like recreation, retail and travel, LinkedIn data showed that candidates are open to moving to other sectors.

The data showed that compared to the pre-COVID period, job seekers who are currently in the affected sectors like travel are 6.8 times more likely to look for jobs in a different sector, compared to pre-COVID times. 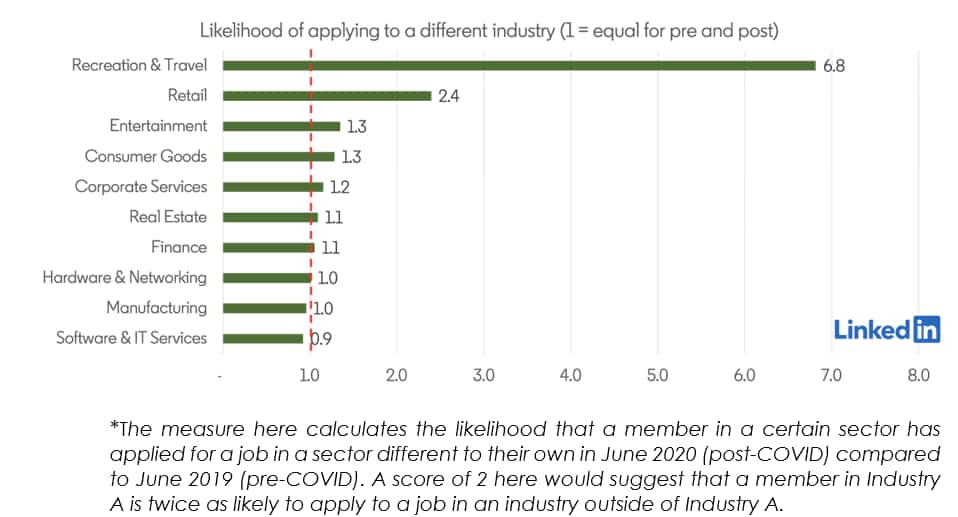 Data further suggested that those in the retail sector are 2.4 times likely to apply for a job in a different sector. The analysis looks at how job seekers in different industries are adapting to changes and adjusting their jobs search strategy.

Disruptive skills are in demand