172@29@17@140!~!172@29@0@53!~!|news|business|economy|china-failure-could-spur-global-deflation-arvind-subramanian-1022762.html!~!news|moneycontrol|com!~!|controller|infinite_scroll_article.php!~!is_mobile=false
Subscribe to PRO at just Rs.33 per month. Use code SUPERPRO
you are here: HomeNewsBusinessEconomy

In an article posted on the website of Project Syndicate, he said the 'hopes' and 'fears' of global leaders at the IMF-World Bank Spring Meetings in Washington centre around China as its failure and success carry risks for the world economy.

In an article posted on the website of Project Syndicate, he said the 'hopes' and 'fears' of global leaders at the IMF-World Bank Spring Meetings in Washington centre around China as its failure and success carry risks for the world economy.

"A China failure scenario could reassemble the events of the 1930s, characterised by competitive devaluation and plummeting real economic activity," Subramanian said.

China is the one country that might be able to jump-start the sputtering global economic recovery and its own economic growth is based on a foundation that is increasingly showing signs of strain, he said. 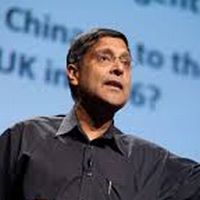 "In short, whereas a hard economic landing for China could spur global deflation, avoiding that outcome could mean the return of global imbalances," Subramanian said.

A failure scenario would be unique in post-World War II history. Because China's economy is so large, the consequences would reverberate worldwide, he said in an article - 'The Risks of China's Failure and Success'.

"But, unlike in 2008, when the US dollar appreciated, allowing emerging markets to revive quickly, the renminbi would likely depreciate should China's economy experience a serious downturn, spreading deflation far and wide. Other currencies might depreciate as well, some as a result of deliberate policy," he added.

Subramanian said as China slowed, so would global growth and the remaining demand would be redistributed toward China, aggravating other countries' already severe shortfalls.

"This would be very different from the previous episode of global imbalances when large Chinese current-account surpluses were at least offset to some extent by rapid Chinese growth," he said.

IMF in 'World Economic Outlook' released earlier this week has upgraded its China growth forecast by 0.2 percentage points for this year and the next to 6.5 percent and 6.2 percent, respectively.

China clocked 6.9 percent growth in 2015 when the Indian economy expanded by 7.3 percent.