The goods and services tax (GST) collection crossed the Rs 1 lakh crore mark for the fifth month in a row in February.

GST collection in the month of February stood at Rs 1.13 lakh crore, 7 percent higher year-on-year, but lower than an all-time high of nearly Rs 1.20 lakh crore in January, official data showed on March 1.

"In line with the trend of recovery in the GST revenues over past five months, the revenues for the month of February 2021 are 7 percent higher than the GST revenues in the same month last year," the Finance Ministry said in a statement.

"While the growth of GST collections eased mildly in February 2021, it remained healthy, in line with the consolidation in the momentum of economic activity observed across a variety of lead indicators," said Aditi Nayar, Principal Economist with ICRA Ltd. 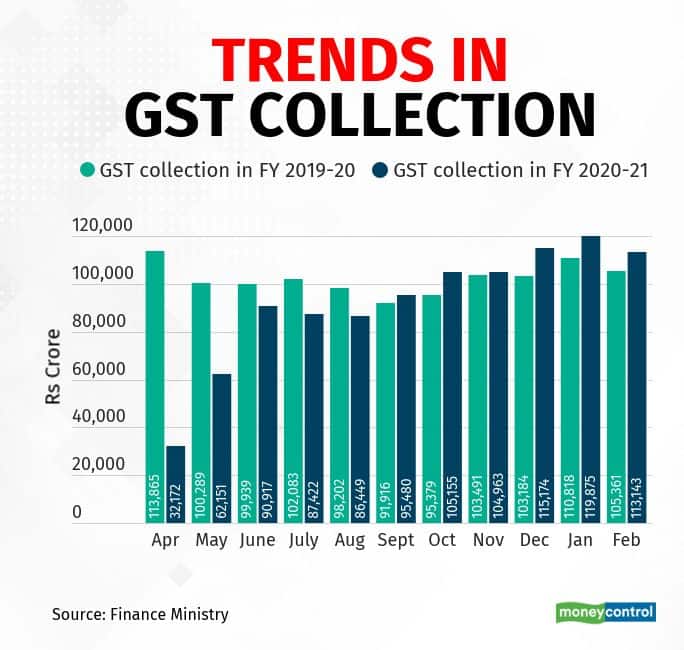 "A favourable base effect is likely to result in the CGST collections expanding by 18-23 per cent in March 2021. However, the settlement of IGST of Rs 48,000 crore between the Centre and the states, will adversely impact the revenues of the Centre, resulting in a moderation in the growth of its gross and net tax revenues in that month," she said.

"This is a clear indication of the economic recovery and the impact of various measures taken by tax administration to improve compliance," it said.