As fuel prices pinch harder, a look at states with the highest and lowest taxes

Rajasthan, Telangana, Karnataka and Odisha levy the highest charges on petrol and diesel, data submitted by the Ministry of Petroleum reveals. A detailed glance at states where fuel prices are the highest and those that have been able to stay clear of such charges

Rajasthan, Telangana, Madhya Pradesh, and Odisha charge the highest amount of value-added tax (VAT) on petrol in the country, according to data submitted by the Ministry of Petroleum and Natural Gas to Parliament on July 19.

The written response to the House by the Minister of State for Petroleum and Natural Gas, Rameswar Teli, showed that the above mentioned states, in addition to others, also add on a plethora of cess, additional taxes and surcharges to the price of fuel, leading to the final retail price of petrol and diesel inflating further.

On the other hand, apart from the Union Territories (UTs), where fuel prices have historically been lower, Arunachal Pradesh and Mizoram levy among the lowest taxes on fuel. 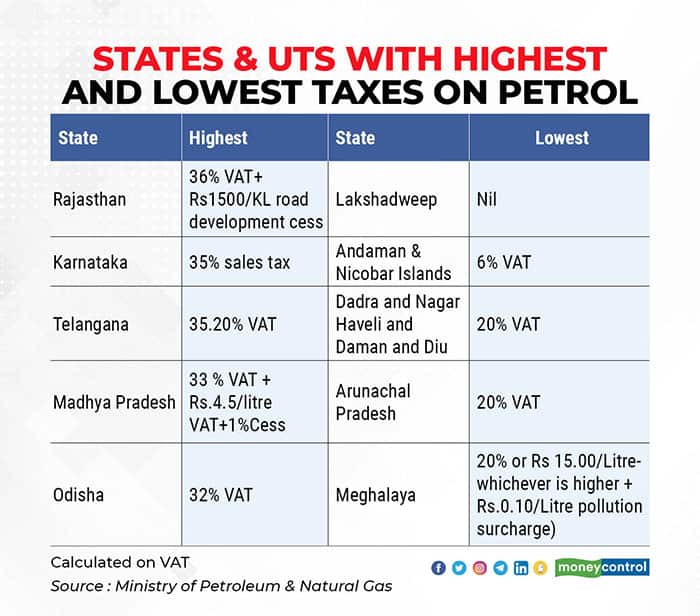 States and UTs with the highest and lowest taxes on petrol

On the inaugural day of the Monsoon session, the subject of rising fuel prices, has seen multiple questions from opposition MPs being directed at the government, along with protests in front of the Parliament by members from the Trinamool Congress.

Since May, petrol prices have been on a sustained, continuous upswing following the changes in the prices of crude oil in international markets.

From May 18 onwards, oil retailers had decided to revise fuel rates on a daily basis. Subsequently, the price has been revised upwards for a record 10-times in the first 17-days of the month.

However, since July 17 there has been no change in prices. 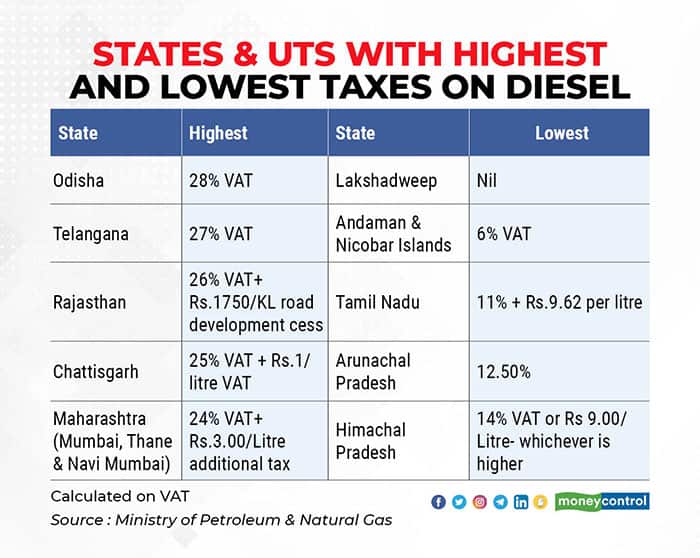 States and UTs with the highest and lowest taxes on diesel

Measured by the government's wholesale price index (WPI), after reducing for 11 straight months, overall fuel prices had risen by just 2 percent in February.

Since then, the rate of growth has been massive. Fuel inflation was pegged at 21 percent in April and 37 percent in May, before moderating slightly to 32 percent in June.

The Ministry of Petroleum also informed Parliament that while prices of petrol have been raised 39 times during the current fiscal 2021-22, that of diesel were increased on 36 occasions.

Interestingly, the data submitted by the Centre to Parliament also reveals that central excise rates have remained broadly unchanged since May 2020, even though the government's earnings from it have ballooned in the past one year.