Given the growth trend for the first 9 months, Sanjay Jalona, CEO & MD, L&T Infotech is confident of beating industry growth in FY17.

L&T Infotech reported a mixed set of third quarter numbers with revenue and profits coming in higher than estimates but margins missing,

Speaking to CNBC-TV18's Farah Bookwala Vohra Sanjay Jalona, CEO  & MD, L&T Infotech said the real world expertise, depth of the verticals and focus on micro verticals helped maintain performance in Q3 despite it being a traditionally weak quarter for the industry. 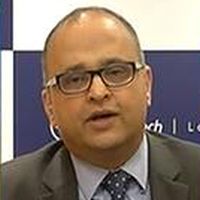 Given the growth trend for the first 9 months, Jalona is confident of beating industry growth in FY17, adding that the company has made three large deals this quarter. The benefits of that will start flowing from the first quarter of FY18.

He also said, the Mindcraft programme with the focus on top 50 accounts has also started bearing fruit.