With more than 1,000 daily flights, Interglobe Aviation (IndiGo), the market leader on passenger traffic, continued its mojo as is evident from a strong set of 3QFY18 earnings.

A strong all-round performance owing to significant growth in revenue from operations and healthy PAT, besides increased operational efficiencies and capacity addition plans make IndiGo a sound business to bank on in the long term.

Quarter in a Snapshot

Revenue from operations clocked an on-year growth of 23.9 percent led by a 14.6 percent increase in volume and a 6.3 percent rise in yield. Additionally, the load factor witnessed a growth of 120 bps over the same quarter last year.

On the cost front, CASK (cost per available seat kilometres) ex-fuel increased by 2.2 percent (YoY) on the back of cost incurred on increase in airport charges, and grounding of some of A320Neo aircraft during the quarter. The management indicated that, as of now, there is no aircraft grounded as the company started getting spare engines from PW (Pratt and Whitney). 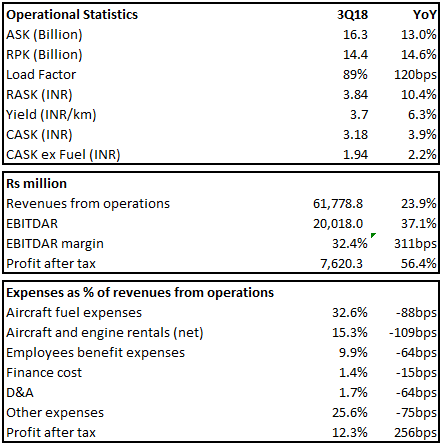 IndiGo was able to post EBITDAR margin of 32.4 percent, up 311 bps, over the same quarter last year. This was primarily driven by reduction of 109 bps in aircraft and engine rentals (net) and 88 bps reduction in fuel cost as percentage of revenues from operations.

The management indicated that the December quarter's profitability improved YoY on the back of better revenue management and the credit the company received from Pratt and Whitney (PW) for the engine issue.

Capacity Addition: During the quarter, the company added 12 aircraft in its fleet. Additionally, the company has placed a huge order for aircraft and delivery of these aircraft will help IndiGo retain its leadership position in the Indian market. In fact, the management indicated that IndiGo’s capacity is expected to register a CAGR (compounded annual growth) of about 20 percent over FY18-20.

International Foray: Eyeing long-haul international market, IndiGo management has expressed interest in acquiring debt-laden Air India's international operations —  a move that would give IndiGo immediate access to the various restricted and closed foreign markets. It would strengthen its reach and give it access to highly coveted slots at foreign airports.

Even if the deal does not fructify, the management intends to start a low-cost airline for the long-haul market.

UDAN - regional growth: The government’s regional air connectivity scheme UDAN is another avenue for IndiGo to capture growth coming from non-trunk routes. IndiGo has started connecting non-trunk routes aggressively and has chalked out plans for regional connectivity. It just got approval for 20 routes under UDAN scheme. The management is yet to analyse those routes.

ATR operations: As part of regional connectivity program, the company has sourced ATR aircraft and has started operations from December this year to connect. The management indicates that the operation would be 5 percent of the total capacity in the years to come.

Changing Aircraft Strategy: IndiGo now plans to use the cash flow to own aircraft and believes that this would bring in additional operational cost savings. In 2QFY18, the company had successfully completed a fundraising and now has enough resources to buy new aircraft.

The company bought 3 ATRs instead of opting for a proven lease-and-buyback arrangement during 3QFY18.

IndiGo's confidence in the strategy stems from the fact that new technology which is unlikely to be obsolete in the near future. Adoption of new technology will translate into additional cost savings if the aircraft are flown for longer hours.

Moneycontrol Research believes IndiGo has all the right ingredients that is required to retain its leadership position in the Indian aviation sector. At the current price, it is quoting at 5.8 and 5.0 times FY18 and FY19 projected EBITDAR, which we believe is attractive for the long term investors.