We see a challenging time ahead for housing finance companies, amid rising rates and competition, and remain extremely selective; Buy HDFC and Indiabulls Housing Finance

The financial landscape in India is changing fast with non-banking financial companies (NBFCs) gaining market share in the overall credit pie. Within the same, housing finance companies (HFCs), which has been in existence for more than two decades, seems to be coming of age. We look at the sector dynamics and quarterly performance of large HFCs (loan book size over Rs 50,000 crore) to understand the key risks and drivers going forward.

HFCs continue to gain market share
Growth in housing credit continues to outpace overall credit growth. Housing credit growth in FY17 and FY18 was adversely impacted due to demonetisation, some disruptions caused by implementation of the Goods & Services Tax and Real Estate Regulatory Authority. Given the under penetration of housing credit relative to the global average, long term growth outlook for housing credit remains a positive.

HFCs have been gaining market share due to their focus on niche segments. Of this, self-employed and affordable housing are the fastest growing sub-segments. Though banks are also present in the smaller ticket home loan market, their lending to the economically weaker section, without any formal income proof, is limited. Hence, HFCs are trying to tap into this underserved market segment. Several government initiatives (interest subvention scheme, tax incentives, Housing for All by 2022, infrastructure status accorded to affordable housing, PMAY) along with a regulatory push (priority sector status, lower risk weights on small ticket size loans) are key growth drivers in this segment.

Before 2012, affordable housing was largely being served by a few lenders, such as GRUH Finance, Dewan Housing Finance and Repco Home Finance. Of late, many new players have emerged in this space. In the last 3 years, there have been 28 new entrants in the market, most of them focusing on the affordable segment. As of May, 95 HFCs were operational, with 10 applications for fresh HFC licenses under process with the National Housing Bank (NHB). 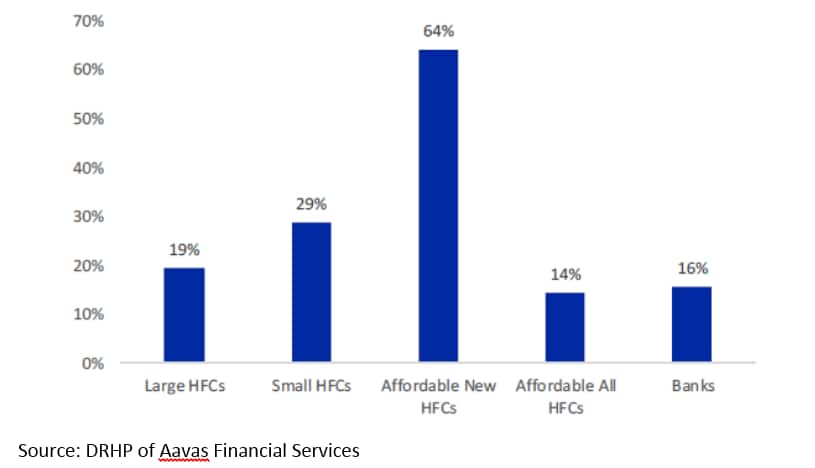 It is noteworthy that delinquencies are also rising as a flipside to this high growth. For instance, asset quality for newer HFCs in the affordable segment was weaker, with gross non-performing assets of 4.1 percent as compared to 1.1 percent for all HFCs as on March 31.

Delinquencies are still not a broad-based trend and are limited to entity-specific factors and external events like demonetisation and GST. However, it definitely warrants caution as cash flows of borrowers in these segments is highly volatile. Higher lending yield in the segment is expected to offset higher credit cost to some extent. But intense competition in this space will limit the upside in lending rates. While the affordable segment will grow at a high rate, few players will thrive. Larger players are increasing getting interested in these segments. For instance, Housing Development Finance Corporation (HDFC) is increasingly targeting the economically weaker section (EWS) and lower income group (LIG) in affordable housing. The latter constituted 37 percent of approvals (incremental sanctions) in volume terms and 19 percent in value terms during Q1.

HDFC continued to enjoy stable spreads. For IBHFL, spreads were almost steady and continued to benefit from higher yielding non-housing portfolio. For LIC HF, pressure on spreads continued despite proportion of non-housing segments increasing to 21 percent in Q1 FY18 as compared to 16.7 percent in the same period last year.

Margin will be key monitorable amid rising rates
HFCs are now facing the heat from rising interest rates after the same moderated till Q3 FY18. Yield on the 10 year government bond has now risen above 8 percent, which will increase the cost of funds for HFCs. It is extremely difficult to pass on the rising rates to borrowers. In such scenario, most HFCs resort to growing their high yielding non-housing loan book or borrow for shorter tenure, which is relatively cheaper to mitigate rise in funding costs. Both these strategies do work in short term, but can prove to too risky in a non-conducive market. HFCs with higher share of short term borrowings in overall borrowing mix may get impacted more in a rising interest rate scenario. We like HDFC as it has demonstrated its ability to maintain margin across interest rate cycles, amid rising competition. We are encouraged by the fact that HDFC runs a well matched asset liability maturity (ALM) book, with lower gaps in medium term buckets as against peer HFCs.

Outlook and top picks in the segment
We are positive on the growth prospects of HFCs. But intense competition and rising rates calls for a selective approach.

PNB HF’s strong performance is largely reflected in its valuation. Near term catalysts for the stock remains progress on the announced stake sale of around 60 percent (by both PNB and Carlyle group) to either a financial investor (PE player) or a corporate and the likely valuation of the impending deal. While the prospective buyer will be required to make an open offer for minority investors, speculation around valuation of the deal will add to volatility in the stock. We suggest investors to wait for better clarity.

IBHFL is expected to maintain superior return ratios with return on assets (RoA) and return on equity (RoE) above 2.7 percent and 27 percent, respectively. Valuation looks reasonable given the strong earnings growth expectation. Investors should look to buy the stock on dips, should it correct in response to rising yields.

It might be cliché to mention that our top pick in the sector remains HDFC. While HDFC’s headline valuation seems on the higher side, the core lending business is valued at 1.8 times FY20 estimated book value, a significant discount to its historical average. Though transition to IndAS can make quarterly earnings volatile, the core performance of HDFC continues to remain strong. Additionally, investors get exposure to its valuable subsidiaries. It is a rarity to find a quality financial services franchise (and not just a housing finance play) at a compelling valuation. With markets staring at multiple challenges in the near term, HDFC is the most worthy bet in the housing finance space.