TEducation, automobile and healthcare were the key contributors to the ad revenue growth and would continue to do so, said Girish Agarwaal, Promoter & Director, DB Corp.

DB Corp that publishes Dainik Bhaskar and other newspapers reported a 5.92 per cent increase in consolidated net profit at Rs 110.11 crore for the first quarter ended June 30 versus Rs 103.95 crore during the same quarter of previous fiscal.

Girish Agarwaal, Promoter & Director, DB Corp said he is happy with the 5 percent ad revenue growth in spite of GST impact and 35 percent EBITDA margin improvement in print in the quarter gone by. However, a 5 percent topline growth is moderate and would aim for a higher growth going forward, said Agarwaal.

Education, automobile and healthcare were the  key contributors to the ad revenue growth and would continue to do so, he said, adding that real estate will see a bounce back in coming quarters. Hope to do better than 5% ad revenue growth in coming months, he said.

The fall in ad revenues in the digital space was a conscious decision of removing irritant advertising, he said. The digit ad revenues were down 1.5 percent in the quarter at Rs 12.3 crore.

DB Corp publishes six newspapers including Dainik Bhaskar, Divya Bhaskar, Dainik Divya Marathi and Saurashtra Samachar, and operates 'My FM' radio station in 30 cities. Besides being engaged in printing and publication of newspapers in 4 languages across 14 states, it also has presence in radio and digital business. 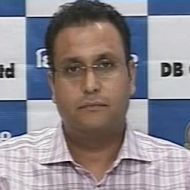