Double Your Income series: Blue chips are passé, small caps will be the winners of 2020

Whenever one of the indices has opened a big gap over the other one, its fall has also been much worse than the other.

A small quiz to begin with.

Which of these two indices do you think has done better over the last 15 years - the BSE Sensex or the BSE Small Cap index?

And this cancels out the strong gains a few manage to achieve over the years. Therefore, it appears that the Sensex must have done better.

Well, here's the answer in the form of their movement over the years. At first brush, it appears that the Sensex is winning this one, albeit only marginally.

However, if we consider the data up to December 2017 and not beyond, we see the Small Cap index winning by a significant margin. An outperformance of 35 percent to be precise.

Seems like there’s no clear winner here. Sometimes, the Sensex has had the upper hand and at other times, the BSE Small Cap index.

The chart highlights another interesting point…

Whenever one of the indices has opened a big gap over the other one, its fall has also been much worse than the other.

Case in point being the huge correction the Small Cap index has seen since December 2017. It rose much faster than the Sensex between 2014 and 2017. However, most of that outperformance is now a thing of the past. The Small Cap index has fallen 30 percent between then and now as compared to the 19 percent gains recorded by the Sensex.

Something very similar happened post December 2007 as well. The Small Cap index left the Sensex far behind only for Sensex to make a strong comeback. Parity was restored the very next year.

Does someone sense a mean reversion here?

Just as the stock market reverts to its long-term average valuations, do these indices mean revert to a specific ratio between the two?

Here’s what I got after plotting the data of the ratio between the Sensex and the BSE Small Cap index over the last 16 years. 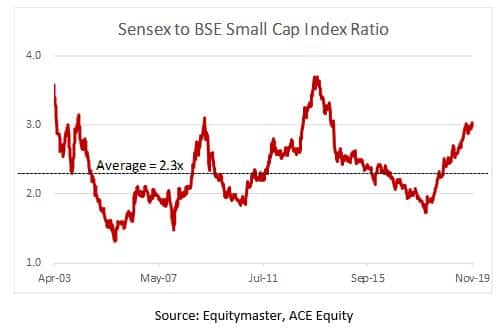 Looks like 2.3x is the golden mean. The ratio of Sensex to the BSE Small Cap index has averaged 2.3x in the last fifteen years.

Any time in the last 16 years the ratio has gone significantly higher or below this number, it has corrected itself and moved closer to the 2.3x mark.

If the ratio has gone much higher than 2.3x, the Sensex has underperformed its Small Cap counterpart over the next 1-2 years. This is to ensure that the ratio goes back to 2.3x.

And whenever it has gone much below 2.3x, the Small Cap index has tended to underperform the Sensex over the next 1-2 years to restore parity to 2.3x.

Where does the ratio stand right now?

And this is mainly because of the outperformance of a huge 50 percent by the Sensex over the last couple of years. Do note that the Sensex is up 19 percent point-to-point and the Small Cap index is down 31 percent in the same period.

This 50 percent outperformance has taken the ratio to well above the long-term mean.

With the ratio now at 3x, I think it is time for the tables to turn. There’s a strong chance the Small Cap index will outperform the Sensex over the next 1-2 years.

In fact, the last time the ratio was this high was back in 2014 when it stood at 3.2x. What happened over the next couple of years?

Therefore, it may not be a bad idea to shift some of the money from blue chips into small cap stocks and have the odds in your favour.

So, if you have a portfolio where blue chips account for 80 percent of the value and small caps 20 percent, it may not be a bad idea to change this to 70:30 or maybe even 60:40 in case you want to take slightly higher risks in exchange for slightly higher returns.

If the historical data is any indication, you will be rewarded with strong gains over the next 1-2 years.

In case you are wondering what is the logic behind the 2.3x ratio, I don’t think it matters much.

What matters is how consistently the Sensex and the Small Cap index have moved over the years to keep the sanctity of this ratio intact.

It is the efficient market system at play I believe. After all, the companies in both the indices are part of the same ecosystem and are likely to have similar topline and bottom line growth numbers on an aggregate basis over the long term.

Which is why there’s a high chance the long-term mean will keep hovering around the 2.3x mark and could provide a good thumb rule for you to decide your allocation between blue chip stocks and small caps.

Would you like to know the secrets of my Double Income strategy?

Then watch my FREE video series between 12th to 17th December. For the first time, I’ll reveal my techniques to double your income in this exclusive video series. You can block your free seat here.

This article was first published in Equitymaster on 5 December 2019.

(This post is a joint initiative between moneycontrol and Equity Master. Rahul Shah is Equitymaster’s Co-head of Research. He has more than 16 years’ experience in equity research and building investing systems.)

Disclaimer: Equitymaster Agora Research Private Limited (Research Analyst) bearing Registration No. INH000000537 (hereinafter referred as 'Equitymaster') is an independent equity research Company. This Article is for information purposes and is not providing any professional/investment advice through it and Equitymaster disclaims warranty of any kind, whether express or implied, as to any matter/content contained in this Article, including without limitation the implied warranties of merchantability and fitness for a particular purpose. Information contained in this Article is believed to be reliable but Equitymaster does not warrant its completeness or accuracy. Equitymaster will not be responsible for any loss or liability incurred by the reader as a consequence of his taking any investment decisions based on the contents of this Article. The reader must make his own investment decisions based on his specific investment objective and financial position and using such independent advisors as he believes necessary.
Rahul Shah
TAGS: #Business #double your income #India
first published: Dec 10, 2019 05:51 pm