Cryptoverse: Will you grow old with bitcoin?

More people in the United States than ever before are turning to cryptocurrencies to help fund their retirement, it seems, even as the recent market carnage provides a stark reminder that this wild market is not for the faint-hearted.

If you assumed crypto was just a young person's game, think again.

More people in the United States than ever before are turning to cryptocurrencies to help fund their retirement, it seems, even as the recent market carnage provides a stark reminder that this wild market is not for the faint-hearted.

Some 27 percent of Americans aged 18-60 - around 50 million people - have owned or traded crypto in the past six months, a poll published last week by crypto exchange KuCoin found.

Yet older folk are more devoted to the young asset class than the general population, according to the survey carried out at the end of March, with 28 percent of those aged 50 and above betting on crypto as part of their early retirement plans.

Their most popular for investing in crypto were that they saw it as the future of finance, they didn't want to miss a hot trend, and they saw it as a way to diversify their portfolios. (See GRAPHIC)

The market turmoil of recent weeks has hushed talk earlier in 2022 that bitcoin and other crypto would win mainstream acceptance and be ushered into pension plans.

"If they (investors) want crypto, it should be a very small allocation of their portfolio, and they should be prepared to lose it," said Erik Knutzen, chief investment officer for multi-asset class strategies at Neuberger Berman.

"We would not recommend it to everybody."

Indeed bitcoin is trading at around $30,000, down 60 percent from a peak of $69,000 in November. And the market meltdown means many newcomers' investments are deeply in the red.

Nonetheless, crypto investors and analysts are watching like hawks for any indication that bitcoin could bounce back.

Using a model based on the volatility ratio of bitcoin to gold, the team estimate "fair value" for bitcoin at $38,000. 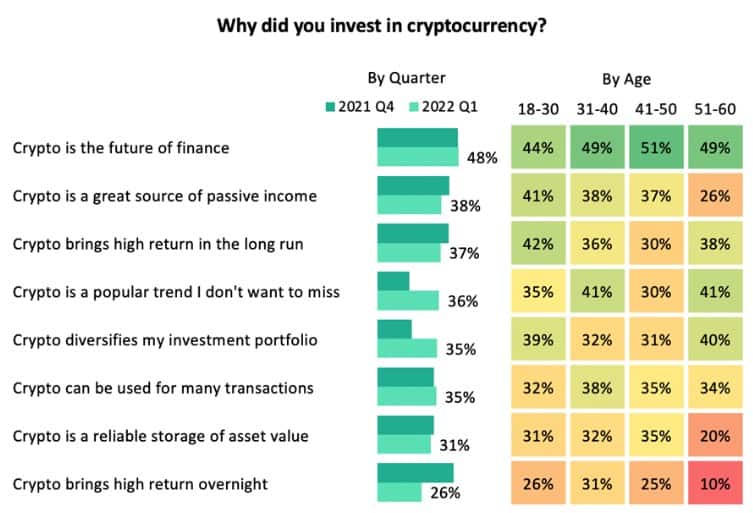 The KuCoin poll comes a week after a survey of 11,000 adults by the Fed found that 12 percent of Americans dabbled in cryptocurrencies as an investment last year.

It did not break down participants by age, but found almost half of those holding crypto for an investment had an annual income of $100,000 or more, while almost a third had an income under $50,000.

If older investors are in the new crypto vanguard, though, has there been a rush from asset managers to meet this demand?

Fidelity Investments caused a stir in April when it announced individuals will soon be allowed to allocate part of their retirement savings in bitcoin through their 401(k) investment plans.

"Fidelity always operates and makes decisions with the highest level of integrity and an unwavering commitment to our customers, including those saving for retirement," a Fidelity spokesperson told Reuters.

But if anecdotal evidence from a Reuters-hosted summit of investors and asset managers in New York last week is any guide, it may have the 401k crypto market to itself for a while yet.

The general consensus was that crypto is prohibitively volatile for retirement purposes. Unless you are a sophisticated investor, such as a hedge fund, or are prepared to swallow a hefty loss, then it is best to steer clear.
Reuters
Tags: #bitcoin #Business #cryptocurrency #Cryptoverse
first published: May 31, 2022 11:09 am