With a jump of more than 350 percent in its price this year, ethereum has the second-largest market capitalization after bitcoin, but not as much cache and perhaps more operational challenges that could prevent it from eclipsing its major rival.

Ethereum has outperformed major digital currency rivals this year, bolstered by the surge in decentralized finance (DeFi) and the anticipation of a technical adjustment this summer, but it faces hurdles that could stall its rise.

With a jump of more than 350 percent in its price this year, ethereum has the second-largest market capitalization after bitcoin, but not as much cache and perhaps more operational challenges that could prevent it from eclipsing its major rival.

In the crypto world, the terms "ethereum" and "ether" have become synonymous. Technically, ethereum is the blockchain network in which decentralized applications are embedded, while ether is the token or currency that enables or drives the use of these applications.

Bitcoin, meanwhile, has risen a more modest 97 percent this year. Since hitting an all-time high of just under $65,000 in mid-April, bitcoin has actually fallen roughly 18 percent. 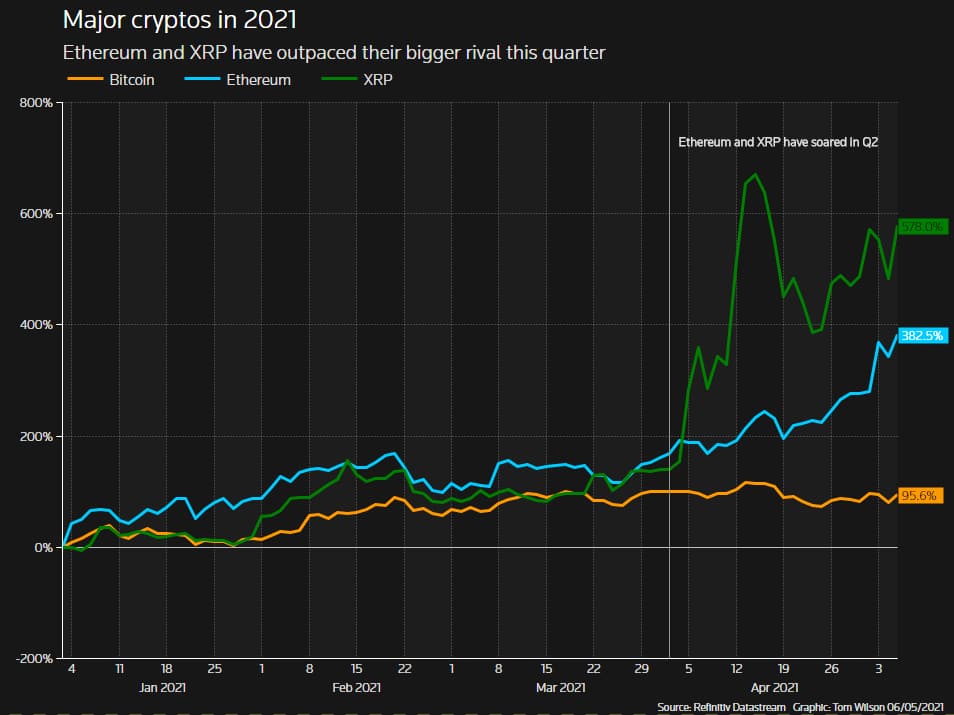 A rise in institutional interest has increased ethereum demand, but supply has been limited. The token's supply in exchanges in April hit its lowest in nearly 2-1/2 years, according to Kraken Intelligence, a research blog from cryptocurrency exchange Kraken.

"It's more than just a coin. It's a whole ecosystem that allows other applications to be built," said Bradley Kam, chief executive officer of blockchain domain provider, Unstoppable Domains.

At the heart of ethereum's ascendancy is DeFi, which refers to peer-to-peer cryptocurrency platforms that facilitate lending outside traditional banking institutions. Many sites run on the ethereum network, using an open-source code with algorithms that set rates in real time based on supply and demand.

The value locked - the total number of loans on DeFi platforms - was $79 billion as of Friday, DeFi Pulse data showed, up nearly 600% from $11 billion in October.

DeFi, however, has its problems. Dune Analytics research showed 2%-5% of transactions on ethereum-based decentralized exchanges failed due to complications such as slippage or insufficient "gas" prices, which are the fees required to successfully conduct a transaction on the ethereum blockchain.

Between April 15 and April 21, for instance, roughly 1.1 million transactions were made on Uniswap, a DeFi protocol used for exchanging cryptocurrencies. Of those, 241,262 failed, representing the largest number of transaction failures across the entire ethereum network, data from analytics platform Etherscan and Dune Analytics showed.

"Issues such as failed transactions and front-running are not subtle, costing users millions of dollars every day," he said, referring to the practice of getting a transaction first in line in the execution queue right before a known future contract. "These major ... problems limit the appeal of these products for a wider audience and ultimately hinder the ecosystem's growth."

Wearn estimates that more than $285 million were lost in DeFi hacks so far this year.

Ethereum has also been plagued by the network's inability to scale to meet demand without incurring high transaction fees as well as slow execution of transactions, market participants said.

The first phase of an upgrade called Ethereum 2.0 launched last year is aimed at addressing the network's tech issues on speed, efficiency, and scalability.

However, John Wu, president of AVA Labs, an open-source platform for financial applications, pointed out that the planned migration to Ethereum 2.0 has been in the works for years.

"The timelines have consistently been delayed, so it's hard to feel comfortable with that unknown," he said.

Ethereum also faces stiff competition from networks such as AVA Labs' Avalanche and Binance Smart Chain, which are also compatible with ethereum's assets and applications.

Data from AVA Labs showed users have transferred more than $170 million to Avalanche from ethereum since February.

Still, hopes of a technical adjustment called EIP (ethereum improvement proposal) 1559, which is expected to go live in July and is seen reducing the supply of ethereum, has provided a lift for the digital currency.

EIP-1559 aims to reduce the volatility of ethereum's fees by introducing a mechanism to burn some of those transaction fees, which should slow the token's issuance, analysts said.

The impact on ethereum's price could be similar to a bitcoin halving event, in which an adjustment cut bitcoin's supply and propelled its price to record highs, analysts said.

"There's a lot of numbers going around the market about the potential impact that has like a halving-type magnitude with bitcoin," said Richard Galvin, co-founder and chief executive officer of crypto fund Digital Asset Capital Management.

"They're all pretty positive drivers that have, I guess, seen a pretty strong revaluing."
Reuters
Tags: #Business #Cyptocurrency #Ethereum
first published: May 8, 2021 12:30 am