For airlines, months, and at times, years of efforts go into announcing a route. This involves looking at the fleet plans for the next couple of years and planning aircraft delivery based on estimations.

The airline which had surprised the aviation community with an announcement of a direct flight between Seattle and Bengaluru was to start operations this October. Instead, the airline would now operate it from next year.

American Airlines is not the only airline and Bengaluru is not the only airport to bear the brunt of COVID-19. Airlines the world over are re-aligning their networks, fleet plans and overall presence as they find ways to come out of the current pandemic environment and sustain.

In March, IndiGo - India’s largest carrier by domestic market share and fleet would have touched down in Chengdu from Mumbai, the second connection to Chengdu for the airline.

But days before the flight could start, Indian government banned all flights to China as the spread of Coronavirus was not contained.

The summer schedule would have offered Mumbaikars a chance to fly non-stop to Moscow as Ural Airlines was to launch flights from March 30 2020.

All flights in India were grounded from March 25 as the country headed for a lockdown. A second flight was on the cards beginning early July between Mumbai and Moscow, with Aeroflot returning to the city after 2008.

Vietnam - fast becoming a major partner of India in trade and tourism would have seen connectivity from Mumbai and additional flights from Delhi, come May.

VietJet - the vietnamese low cost carrier which started services to New Delhi in December 2019 with seven flights a week between the two countries was to rapidly expand the services with a daily flight each to Hanoi and Ho Chi Minh City from New Delhi and five weekly flights to Da Nang - the beach town which attracts holiday makers from across the world.

The airline was to fly thrice a week between Hanoi and Mumbai along with four weekly flights between Ho Chi Minh City and Mumbai starting mid-May. 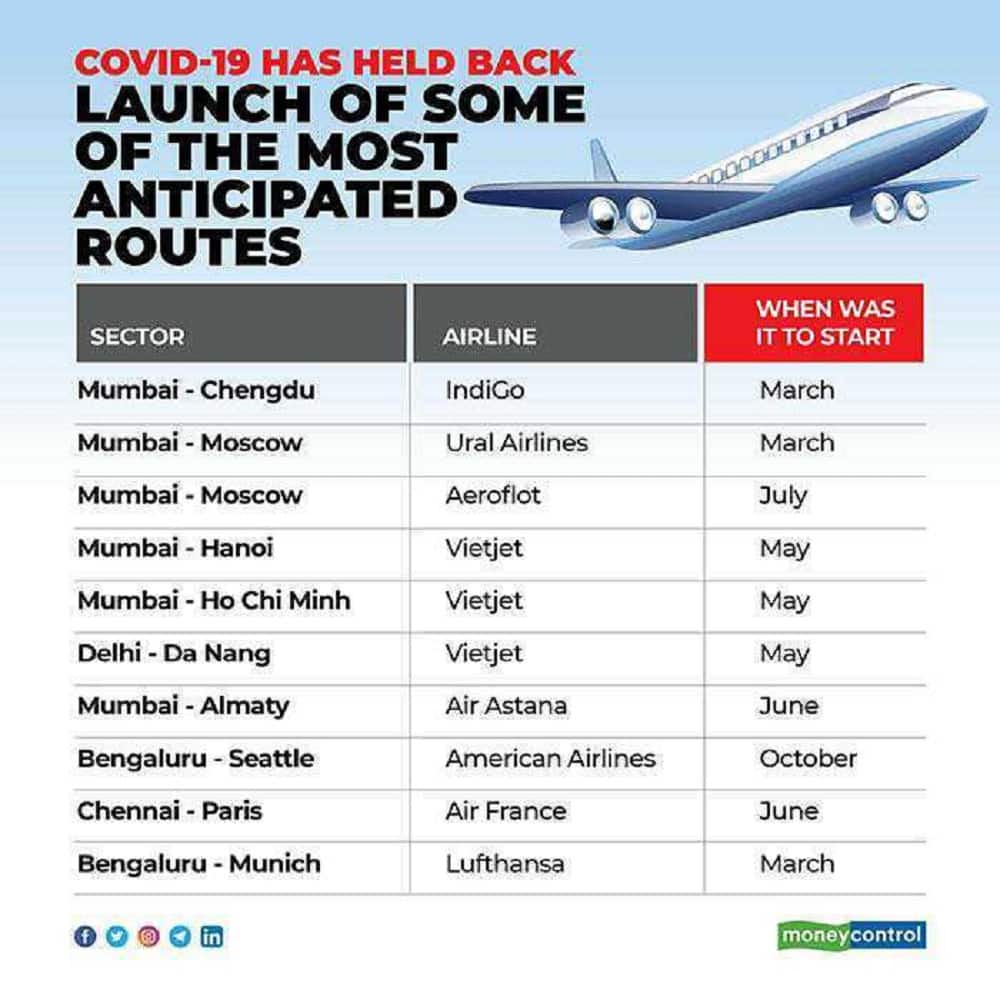 While Bengaluru is seeing its connection to Seattle pushed to next year, the airport was supposed to get a direct connection to Munich this March, which would have supplemented the existing Lufthansa operations to Frankfurt. This too now stands postponed.

Air France was to launch flights to Chennai starting June, which have been tentatively pushed to October.

The Air France KLM group has been trying to consolidate its hold over operations in India after its partner Jet Airways suspended operations last year. The group's rival Lufthansa already operates to Chennai while Air India offers a one-stop connection to Paris via its New Delhi hub with a seamless transit experience since immigration is handled at Chennai.

Conservative estimates suggest that it would take between two to five years for air traffic to be back to pre-COVID-19 levels. Airports earn a large chunk of their revenue from parking, landing and route navigation charges that are paid by the airlines for operations. This forms the aero revenues for the airports.

The other revenue stream for airports is what is classified as non-aero revenues, consisting of rent from office space, advertising and a share of retail stores. With dwindling passenger numbers, there is little change of an uptick in revenues for retail. On the contrary, the going is getting so tough for the stores at airports that many - the world over, have started vacating the space.

For airlines, months, and at times, years of efforts go into announcing a route. This involves looking at the fleet plans for the next couple of years and planning aircraft delivery based on estimations.

The newer routes take time to mature and airlines are willing to give a new route some time to show positive revenues. An airline typically looks at breaking even at variable cost first - comprising the cost of operation of that flight and then helping add revenue at the total cost of operations.

While a transfer passenger market forms a large chunk of calculation for airlines to estimate the passenger load for a sector, there is fear that customers may not want to change flights and could opt for direct options - further putting pressure on some flights and airlines.

This could lead to deferment or delay in taking deliveries of aircraft by the airlines, further impacting both Airbus and Boeing. The two large aircraft manufacturers have already announced shedding of some work force as the entire ecosystem looks to stay sustainable and save cash.

When will the flights be back and if at all those announced would be launched soon, needs to be seen but the market definitely is not conducive enough to have new links at this point of time.
Ameya Joshi runs the aviation analysis website Network Thoughts.
Ameya Joshi
Tags: #American Airlines #aviation #Business #Companies #Indigo Airlines
first published: Jul 7, 2020 02:49 pm