Zee Entertainment Enterprises’ (ZEE) shareholders passed all the resolutions at the 39th annual general meeting (AGM) of the company on September 14.

This comes against the backdrop of the largest shareholders Invesco Developing Markets Fund and OFI Global China Fund LLC seeking a special meeting of shareholders to oust CEO and Managing Director Punit Goenka.

Shareholders voted on six resolutions including adoption of audited financial statements of the company for the financial year ended March 2021. Two other resolutions on the re-appointment of directors Manish Chokhani and Ashok Kurien were not considered since they had already resigned.

What triggered the boardroom scrap at Zee Entertainment?

About 13 percent of shareholders voted against the adoption of financial statements and 87 percent passed the resolution. Invesco and OFI together hold 17.88 percent in ZEE.

Other resolutions such as dividends on preference shares and ordinary shares, and the ratification of payments to the cost auditor were passed with an overwhelming majority of close to 99 percent. 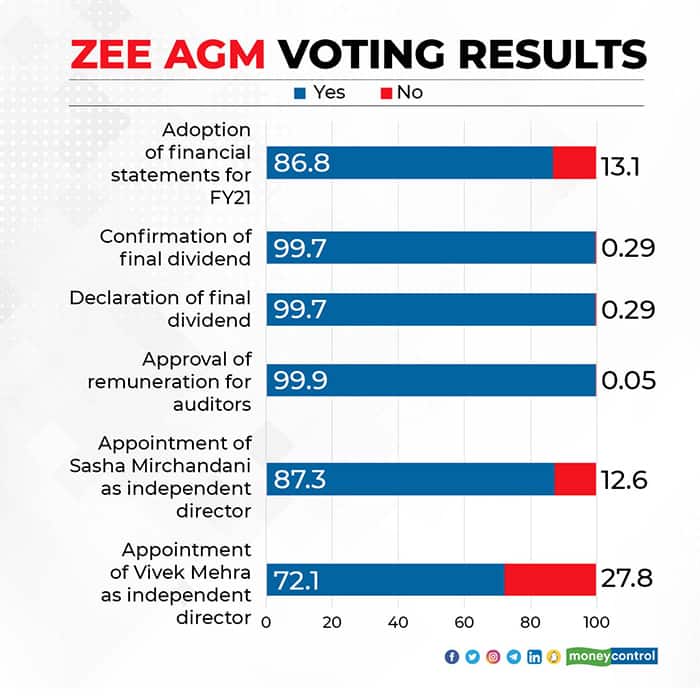 In the AGM, Goenka and Chairman R Gopalan defended the corporate governance track record of the media company.

Zee Entertainment share price zooms; what should investors do?

Ahead of the AGM, Institutional Investor Advisory Services (IiAS) raised a red flag on the reappointment of two directors, Manish Chokhani and Ashok Kurien, and the adoption of its financial statements, citing corporate governance concerns. The proxy advisory firm had questioned CEO’s pay, alleges losses from related-party transactions and weak oversight by some directors in the audit and remuneration panels.

During the AGM, investors question resignation of Chokhani and Kurien, corporate governance issues and Invesco’s intentions.

After the AGM, it will be the extraordinary general meeting (EGM) which will be key. Details are awaited as to when it will held.
Maryam Farooqui
Tags: #Zee
first published: Sep 15, 2021 08:45 am