The rising number of such cases signals a growing awareness among women workers about their rights, forcing several companies to ensure safer workplaces

The number of sexual harassment cases filed across Nifty50 companies rose 8 percent from a year ago to 761 in FY20, signalling a growing awareness among women workers about their rights and increased alacrity by several companies to ensure safe workplaces.

Among sectors, IT companies dominated the list with a total of 340 complaints.

Human resource officials attribute the rise in complaints filed to movements like MeToo motivating women to speak up against sexual misconduct by colleagues.

The MeToo movement, which gained prominence in October 2018, brought to the forefront the issue of sexual harassment at the workplace. Several celebrities were also named as alleged perpetrators during this campaign of exposure. This, according to HR experts, also led to an increased awareness about PoSH and the need to file official complaints.

Companies across India Inc have also been making efforts to ensure that women feel safe.

At FMCG giant HUL, which saw three complaints being filed in FY20, apart from gender-sensitisation sessions and PoSH Act training, specific measures are taken for the safety of women.

Inside HUL offices, women employees are discouraged from working beyond 8.30 p.m. Any instances of late working are detected by the attendance card reader and an alert is sent to the employee’s line manager automatically.

In circumstances where late working becomes unavoidable, women employees are required to take a drop home from a company approved car vendor and to be escorted home by a male colleague. The woman also has to inform the line managers upon reaching home.

“Rising complaints show that women are more forthcoming in reporting these incidents, maybe because of the rise in understanding and awareness of PoSH. However, this may not be the replica of the actual incidents,” she added.

While 761 might seem a modest number, these are the official cases filed against sexual harassment of women. The actual numbers are likely to be higher.

A peek into the official numbers

All the Nifty constituents said in their annual reports that regular workshops on the Prevention of Sexual Harassment (POSH) Act are being conducted in their offices. Further, sensitisation sessions for male employees are also being undertaken.

After the ICC report on a complaint is finalised, companies take a call on what action is to be taken against an erring employee. 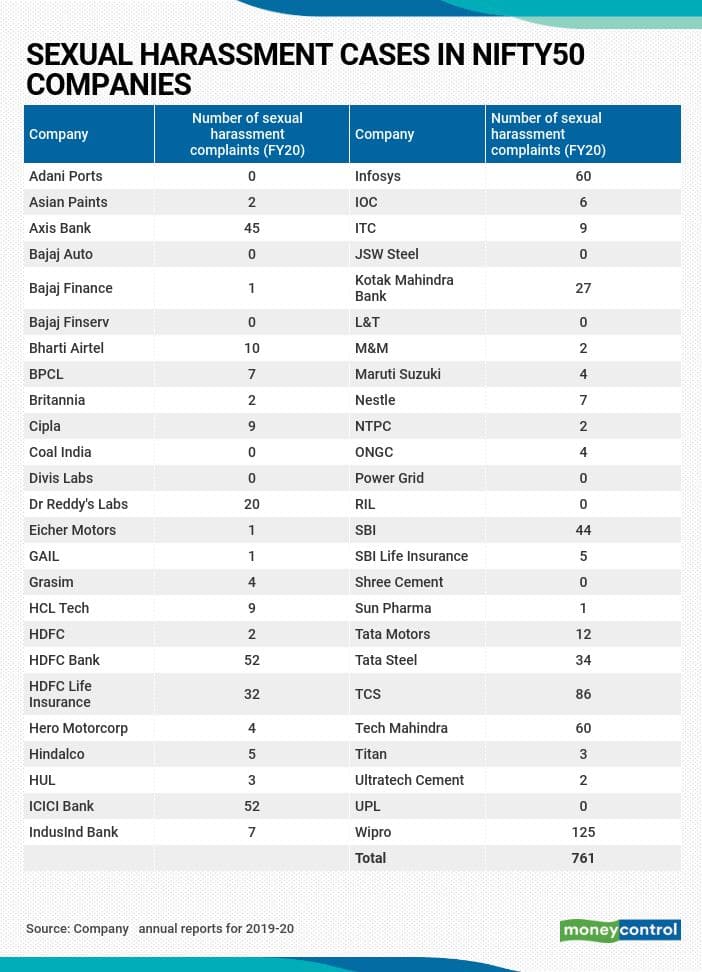 Wipro has the highest number of sexual harassment complaints filed under the Sexual Harassment of Women at Workplace (Prevention, Prohibition and Redressal) Act, 2013. In its annual report, the company said that 98 of 125 complaints filed in FY20 had been disposed of while 27 were pending.

In FY19 as well, the IT sector had topped the list of sexual harassment complaints.

What companies are doing

Compared to a decade ago, when women were discouraged from filing sexual harassment cases by companies, human resource officials are of the view that more official complaints are being filed.

The head of human resources at a financial services firm told Moneycontrol that companies are equally cognisant of the fact that a complaint has to be resolved in a given time period and that delays or malice could lead to the employer brand being impacted.

“While PoSH cases have to stay anonymous as per law, we have seen multiple instances of companies being ‘named and shamed’ on social media. This is not a situation that any listed companies want to face. So, additional efforts are being taken to encourage women to file complaints whenever they feel uncomfortable with colleagues’ behaviour, so that a resolution can be reached,” the official added.

Further, with women being more forthcoming in filing complaints, HR officials said that it is also easier to help employees understand what constitutes a behavioural issue and what genuinely is sexual harassment. The chief people officer (CPO) of a Mumbai-based tax firm told Moneycontrol that there have been instances in his firm where female employees did not feel comfortable with a specific behaviour of a colleague and reported it as sexual harassment. The internal complaints committee deliberates over such complaints and decides whether they actually amount to sexual harassment. The panel includes senior women from across the workplace.

“We had a case where a woman did not like the use of the word ‘darling’, a generic usage her superior had for all female team members, and so she filed a PoSH case. While this was inappropriate usage, it cannot be construed as sexual harassment. We then bought both the parties face to face and explained the situation. This was then resolved amicably,” the CPO added.

Even listed companies across India are taking additional steps to nip the problem in the bud. ICICI Bank said in its annual report for FY20 that it ensures that there is mandatory e-learning on PoSH at the time of induction.

Further, the bank also has 'iTravelSafe', an application providing easy access to register an SOS distress signal for women employees. ICICI Bank had 97,354 permanent employees on its rolls at the end of FY20. The bank said that women constituted 32 percent of its workforce as of FY20.

While listed companies do not publicly disclose names or actions taken against the harassers, HR officials said that the most common resolution is to transfer the accused to a different department.

In the financial services sector, in particular, where transfers to another city may not be feasible in case the accused works in key roles like investment, treasury or top management, suspension orders are not uncommon.

Only in cases where there is evidence of physical abuse and consistent efforts by the accused to shut down a complainant is a decision to terminate taken.

In the IT sector, a senior Vice President at a mid-sized IT services firm explained that 60-70 percent of the cases result in official written apologies followed by transfers or suspension for 3-6 months. He added that ‘terminations’ are rare.

“If more women are coming out and filing complaints, it is a good development. But more can be done to create awareness and it is not where it ought to be,” said Chakraborty.