Inflation across categories has hit small packaged consumer goods companies more than their larger rivals given their thin cash reserves and inability to pass on the cost increase to consumers in the face of tepid demand.

Small Fast Moving Consumer Goods (FMCG) companies that operate at regional levels are struggling in the face of unprecedented inflation across categories.

Several of these companies have witnessed a slump in sales, according to data from Kantar, the data analytics and brand consulting firm, despite the overall categories posting growth.

The overall detergent bar category, however, grew 2.3 percent in the period, according to Kantar. Other local brands are in a similar situation. (As shown below) 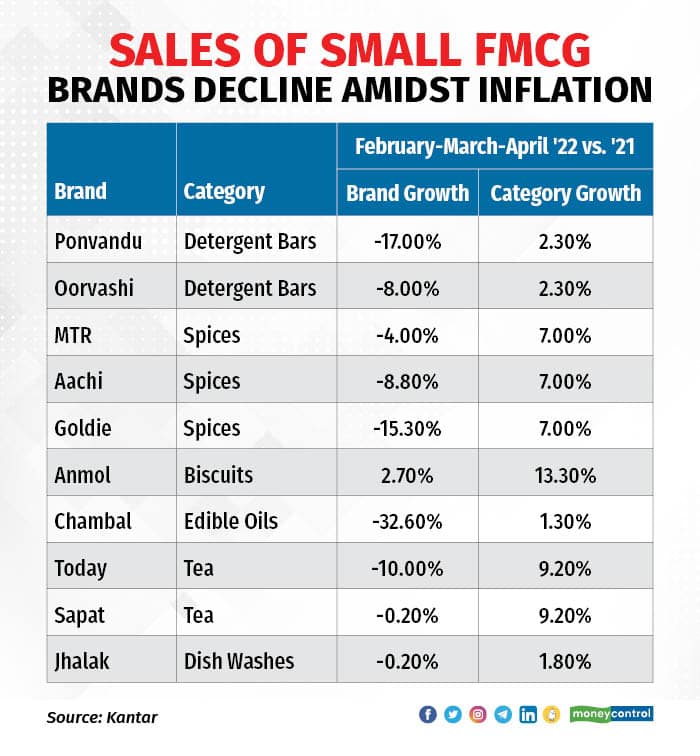 Small brands ideally are expected to gain out of inflation, which typically prompts consumer to switch to smaller and cheaper versions when confronted with price hikes in products of daily use.

The regional brands are, however, struggling with rising input costs and unable to cope with the pressure on their margins, have passed on the increase to consumers, denting their sales.

“Most of these brands had a fabulous run in February-April 2021 versus the same period in 2020. Every brand in this list was growing during this period but when inflation hits, the small pack of an established brand becomes more lucrative than the large pack of a local brand as the price differential shrinks. This, in turn, negatively hits the local brands to an extent,” said Kantar.

Inflation measured by the Consumer Price Index (CPI) in May was 7.04 percent. That’s down from April’s near-eight-year high of 7.79 percent, but is unlikely to fall below the Reserve Bank of India’s (RBI) upper comfort zone of 6 percent this financial year.

Several Micro, Small and Medium Enterprises (MSMEs) in the FMCG sector have also shut shop as they struggle with inflation, according to market researcher Nielsen.

According to the NielsenIQ FMCG Snapshot for the first quarter of 2022, there was a 5.3 percent increase in the exit of small FMCG manufacturers compared to the same period last year.

“The small players have lesser ability to withstand these shocks given their thin pockets and have to go for price hikes, which then starts impacting demand and their sales are hit,” said Rajat Tuli, a partner at management consulting firm Kearney.

The biggest challenge for MSMEs operating in the FMCG sector, said experts and industry stakeholders, is containing the cost increases due to high commodity prices given their low cash reserves.

Nashik-based Empire Spices and Foods, with a total turnover of Rs 200 crore, known for its brands Ram Bandhu, RBM, Temptin’ in the spices, papad and pickles segment, has seen its costs jump by 15-20 percent in the last two quarters alone.

“We have not been able to pass on the increase in costs to the consumer given the weak demand scenario. Earlier, we would on an average draw margin of 30-35 percent but now it has reduced to 20-25 percent,” said Anand Rathi, a director at Empire Spices and Foods.

“It is very difficult to sustain margins, especially, on low unit packs of Rs 5 and 10. Our sales are also stagnant,” he added.

Tamil Nadu-based Sunraja Oil Industries has seen its sales fall in the last two quarters as the Russia-Ukraine war and then Indonesia’s palm oil export ban led to a significant increase in the prices of most edible oils.

“We sell sunflower oil under our brand Mr Gold and the prices of the commodity, including palm oil, have skyrocketed in the last few months,” said Kannan Vikas, executive director at Sunraja Oil Industries.

The company, said Vikas, passed on the increase to consumers and raised prices by Rs 60 or 50 percent; this resulted in a sales hit. Sales of the company in the last two months, said Vikas, dipped by 30-40 percent compared to the December quarter.

Beverage makers witnessing high demand after two seasons of abysmal sales are also struggling with high input costs. Pune-based Silver Ice Beverages, which sells, non-alcoholic beverages mostly in the Western regions of the country under its brand Rio, reported bumper sales this season. However, its margins took a major hit.

“Post-Covid, prices of aluminium and several ingredients we import from China have skyrocketed. And as a result, our overhead costs are up by 4-5 percent,” said Rajiv Sangoi, co-founder and director of Silver Ice Beverages.

“We are experiencing a normal season after two years and hence we could not increase our prices anticipating, a hit on demand but this has led to a major impact on our bottom line,” he added.

Most MSMEs in the FMCG sector have halted their expansion plans and cut down on marketing expenditure. Empire Spices and Foods, for instance, which had roped in film celebrity Madhuri Dixit as its brand ambassador in pre-pandemic times, has reduced its marketing budget substantially.

“We are also working on bringing in efficiency in every function possible,” said Rathi.

“MSMEs in the sector are cutting down on marketing and any other employee-related spends while also holding back on their growth plans such as expansion to new territories and new hiring till the pressure on margins abate,” said Angshuman Bhattacharya, national leader, consumer products and retail, EY.