The handover was a professional, board-level affair. The civil aviation minister wasn’t present and no radical announcements were made.

Air India pilots who worked with him remember J.R.D. as strict but always polite, and a stickler for values like on-time travel and high quality of service. (Image of JRD Tata tweeted by Ratan Tata)

In what can be termed a momentous occasion, the Tata Group finally took over Air India, along with Air India Express and a stake in AI-SATS.
While many would have expected a grand ceremony for the homecoming 69 years after the airline was nationalised, it was a low-key affair. So much so that even the civil aviation minister wasn’t present at the handover.
When the Maharaj – as the minister of civil aviation is known – is not present for the handover of the Maharaja – as Air India was referred to because of its mascot – you know the affair is low key and the focus is on professionalism, with the matter being handled at the board level.
The Tata Group announced the completion of the purchase of Air India from the government of India on January 27 and took over the management and control of all three entities with immediate effect. Life has come full circle for the group that started the airline.

Air India - a mixed bag
With Air India, the Tatas get many planes, slots anpolicyd routes, distribution network and a workforce, but each has its own challenges. The planes are old and show their age – sometimes more than what they should – and need immediate fund infusion. The slots were nice until the valuation and now that it is complete, the challenge is to operate on all of them and make money.

Traditional strongholds like routes to the US are facing renewed competition from incumbents like United Airlines and new entrants like American Airlines. The distribution network is changing rapidly the world over with airlines moving to NDC (New Distribution Channel) and reducing dependence on the expensive Global Distribution Systems (GDS).
Employees are an important area in aviation and Air India has qualified and well-trained staff. Air India has been at the forefront of setting up engineering, pilot training and a lot more in the past. However, along with trained and professional employees comes the complexity of worker unions, which Air India has and there have already been threats from them. The Tata Group, though, is no stranger to unions and has them in most of their traditional businesses, if not all.

Where’s the money?
Route-wise data is hard to come by in the public domain but because Air India was a public entity, there were questions about it in parliament and answers. Data released on September 17, 2020, in response to a question, shows that the airline did well on international routes. For FY20, before the pandemic, the airline had 12 routes on which it met total costs while on 24 routes, it met earnings before interest and taxes.

There were 41 international routes on which it met costs at the earnings before interest, taxes, depreciation, amortisation, and restructuring or rent costs. This was followed by 11 routes that met variable costs and 10 that did not meet even variable costs. On the domestic front, there were 101 routes which did not meet even variable costs, while only 9 routes met total cost.
This was a clear indication of how international operations have been a game-changer for airlines. This was more so for Air India even when it operated to US destinations primarily with Boeing 777s, which aren’t the most fuel-efficient planes. 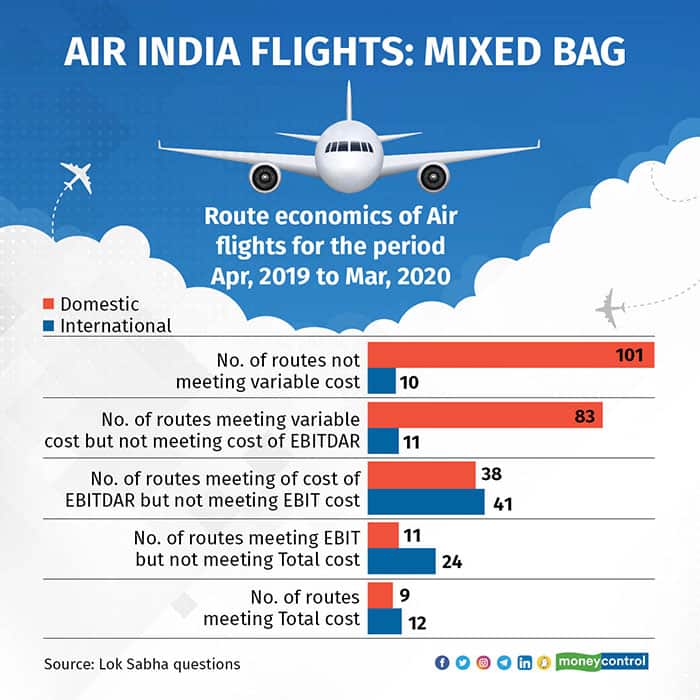 Immediate challenges
A lot would have been expected at the handover – such as the appointment of a new CEO and the announcement of radical changes. However, the group has opted for a slow and steady approach, trying to focus on the soft product first before looking at the bigger picture, which would involve the merger of AirAsia India with Air India Express, among others. A larger group structure will take time to evolve, but there is no time to waste as the new team gets cracking to plug losses and improve customer experience.

No magic wand
The Tata Group has been in the airline business since 2014, in both the full service and low-fare spaces. While AirAsia India, operated in association with AirAsia Bhd, is much maligned due to multiple cases and allegations, Vistara, a joint venture with Singapore Airlines, has grown steadily and is now bigger than the low-fare Air Asia India. Both have one thing in common: losses.

The group, though, has matured as it takes over Air India and would not have fancy ideas of believing public statements of breaking even within a year, which were made when AirAsia India started.

But to put it mildly, if you cannot make an airline work with a clean slate, making it work with debt as high as a mountain and challenges as deep as the ocean is no child’s play. And yet this transaction makes everyone happy – the Tatas, the Indian government, Air India group employees and the Indian taxpayer.