The Steel Ministry has asked the Steel Authority of India (SAIL) to evaluate taking over Monnet Ispat, sources close to the development told CNBC-TV18.


Steel Ministry has asked the Steel Authority of India (SAIL) to oversee the stake sale of Monnet Ispat, sources close to the development told CNBC-TV18.

Sajjan Jindal-led JSW Steel has emerged as the sole bidder for controlling stake in Monnet Ispat through the strategic debt-restructuring route.

JSW Steel has made an offer for the company and has offered to pick-up 22 percent of Monnet Ispat’s Rs 10,000 crore debt.

The lenders had invoked SDR 18 months ago. They will now look if JSW Steel’s bid is attractive, said Sandeep Jajodia, Chairman & Managing Director of Monnet Ispat.

In the second round of bidding, six investors had shown interest of which only JSW had made the final bid.

Jajodia, in an interview last month, had said the majority stake sale will be done by end of the current financial year.

Below is the verbatim transcript of Sandeep Jajodia's interview to Latha Venkatesh & Nigel D'Souza.

Nigel: Has there been an offer that has been put forth. We understand that JSW Steel had offered at one point of time. Now Sail as well is throwing in the hat. Have you heard anything?

However, now it's up to the lenders to see if they find the bid of JSW is acceptable or not.

Latha: We understand that JSW agreed to pick up only 22 percent of the debt? 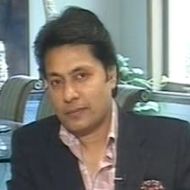 A: It is not as straight as that. One is thing is the sustainable and unsustainable debt. When you say 22 percent of the debt, it doesn't mean the balance debt is write-off. It is structured into another instrument.

A: It was a cumulative preference shares along with equity. So 53 percent of equity which the lenders were holding, if I understand the proposal well, JSW offered to buyout 26 percent out of that and infused another Rs 250 crore into the equity to take them up to 51 percent. So the discussions with the lenders as far as I know is that the balance equity which the lenders hold because of JSW coming in and the debt getting restructured and the company like JSW Steel coming in, the lenders would make up for a lot of their debt through equity - one. The second part of it is that the sustainable debt was; let us say 22 or 24 percent. The unsustainable debt was offered by JSW to be converted into equity at a certain price with a roffer so if that unsustainable debt is converted into an equity and a roffer is given to JSW Steel, going forward in two or three years time either JSW Steel will buy it off or the lenders could sell that in the market and make up for the balance debt.

Latha: What will the equity amount to today – the value of the equity?

A: Are you referring to the marketcap?

A: The marketcap today is about Rs 700 crore.

Latha: The value of the equity would be something like Rs 300 crore.

Latha: Have you been told that the lenders are unhappy with this offer and actually the government of India has therefore asked SAIL to take a look?

A: No, I think this also needs a little clarification. As far as my understanding goes the honourable finance minister sometime in October had mentioned that besides private sector all steel and power companies which are stressed, their proposal should also be referred to SAIL and NTPC etc, the government public sector undertaking (PSUs) to have a look, so it is not particularly only for Monnet Ispat.

Latha: It was a general, I agree, a policy request or a policy consideration that public sector must try and acquire ailing companies in their respective sectors, but we now understand that specific request has gone from the ministry of steel to SAIL?

A: I just want to clarify, first of all I wanted to recall that even for Electrosteel when it was bided for it was referred to SAIL and so it is basically whichever company comes up for bidding for that company, for that moment it becomes specifics, but it is actually taking a lead from what the government had generally said that if it fits the business plan of any government PSU such as SAIL or NTPC, they could also along with private sector look at the opportunity.

Latha: What are your mining resources? What is your stake in Orissa Sponge and what does it entitle you to in terms of ore?

A: We have a 35 percent stake in Orissa Sponge, the company and 21 percent or so is with the current promoters, which is the Mohanty family and about 32 percent is with Bhushan Steel with some of it disputed in the court of law that is what the current structure is.

Latha: You are able to use the ore?

A: The mining is yet to get allotted. I mean the mines has been allotted to Orissa Sponge, it has to be signed. The lease is yet to be signed. So, we are still a very distinct away from the time it can actually be, the lease gets executed and the mine starts to produce.

Latha: What is your quarterly interest outflow and quarterly EBITDA as of the last quarter or average of last three quarters?

A: Considering the markets have been extremely bad and all steel companies globally have been bleeding for last two-and-a-half years, obviously that is the reasons why Monnet Ispat, which is a AA rated company till June 2014, got into trouble because all our coal mines got cancelled and our whole business model was based on captive coal mines. If you recall, we were running the largest underground coal mine in the country and our whole Raigarh facility which was built and which was earlier existing was based on that captive coal mine.

We were the second largest sponge iron players, coal based sponge iron players in the country which we were converting into steel. So, it was very unfortunate that all the coal mines allotted ever to anybody in the last 20 years was suddenly cancelled and then of course there was no linkage available immediately.

Latha: Now the coal situation is better so you couldn’t manage any new linkages?

A: The linkages now get auctioned and we have been trying to get auction. We had also bid for a coal mine. We wanted to start that mine as soon as possible after the acquisition two years ago, but post the acquisition the boundaries of the mine were changed by the Central Mine Planning and Design Institute (CMPDI) and so therefore it was not what the property we had bid for and that got in a lot of forest area. So, we were trying to get that settle with the government that they should restore back the boundaries as a part of the bid document, so that we are able to start the mining.

Now on one side we have got a mine on paper which we are not able to start and because of the mine being on paper we are not eligible for the linkage, so it is a very strange kind of situation we are in.

Latha: In several instances when a bidder is accepting probably 22-25-30 percent of the debt, the promoter families have come in and said that they are ready to take in a little more of the debt, have the Jajodias offered anything?

A: No, we haven’t offered a counter to the biding because under the SDR, in our case it is not Scheme for Sustainable Structuring of Stressed Assets (S4A). In SDR the lenders will have to necessarily change the management as per the current guidelines and therefore we do not have the opportunity to do so.

One more thing, when we talk about this 22-24 percent, we have to see to it in the right context; the debt which was the primary debt was a much lower figure around Rs 6,700-6,800 crore one-and-a-half years ago when the SDR was invoked. After the SDR has been invoked it is the accumulated interest which is now sitting as and looking as a debt, so it is not something which was taken by us.

Latha: Now what is your sense in terms of resolution? Does it get postponed because of the reference to Sail. How do you see the next step and by when can it be resolved?

A: It is very complicated because I do not think any one person is taking any one course. We are in a stalemate currently.

Nigel: I want to ask you about the stake you have in Orissa Sponge because that could be a kicker in terms of any deal going through. The percentage of the stake that you have - how much of it is pledged as of today and have an offer being made either by the Mohantys or by Bhushan Steel to buy out your stake?

A: Mohanty was under shareholders' agreement with us by way of which both Mohantys and we were as one unit and when we acquired Mohanty's stake, partial stake, which come out with an open offer where Mohantys was named as the persons acting in concert (PAC). However, Mohantys are doing something illegal, in spite of being tied up under shareholders' agreement (SHA); they seem to have deflected and gone to the Bhushan site, so we have got a string of new cases which we have filed against the Mohantys in various scopes of law and we are still pursuing and going ahead with further more cases. So a lot of criminal acts have been done by the Mohanty family which have been highlighted.

Nigel: The market was trying to evaluate Monnet Ispat. If you could tell us how much your current capacity is, how much of it was running. Let's focus on steel first then let's focus on your power assets as well because giving a valuation has become very difficult. So if you could give us those details?

A: There are two ways to value something. One is the replacement value. Replacement value for a one million tonne steel plant is approximately 6,000. We are a 1.5 million, so about Rs 9,000 crore.

Nigel: How much of it is running?

A: we have, about seven-eight months ago due to shortage of working capital, shutdown part of the steel capacity. We have two units; one in Raipur and second in Raigarh. Raipur is running 100 percent and in Raigarh we are running partially the direct reduced iron (DRI) and the power plant. So this is current situation.

The DRI capacity is about 0.9 million tonne running and steel is about 0.35 running.