Sahara chief Subrata Roy’s parole is costing the country's market regulator more than Rs 3 lakh a month as it keeps tabs on the tycoon. Roy was granted parole in May 2016 by the Supreme Court after his mother passed away and has been out of jail since.

He owes around Rs 12,000 crore to the Securities and Exchange Board of India (SEBI), which is the money that the Sahara Group collected through bonds in violation of SEBI rules. 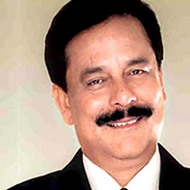 SEBI appointed two constables from the Delhi Police to keep a watch on Roy during parole under instructions from the apex court.

“We are a bit surprised at the bill presented by the Delhi Police,” a source told Moneycontrol.

Last week, the Supreme Court rejected a plea filed by Sahara Group seeking extension of time to pay back SEBI. The court said that if the company fails to pay the amount by February 6, Roy shall have to commit himself to jail. Roy cited demonetisation and economic slowdown as reasons for request of extension of time. The court observed that too much indulgence had been granted to the Sahara chief, more than any other litigant.

Roy had spent two years in jail before being released on parole in May. In October, the Supreme Court had extended his parole after the company deposited Rs 200 crore with SEBI for repayment of investors. The court gave the condition that they should deposit money for refunding investors at regular intervals.

The following month, the Sahara Group presented a road map for the repayment of an outstanding amount of Rs 11,136 crore to SEBI and proposed to clear its liabilities in two-and-a-half years to ensure 'absolute’ release of Roy.