LIVE NOW:Join us for 'The Future Techshot' to gain insights into role of tech in streamlining businesses. Click Here!
you are here: HomeNewsBusinessCompanies

While the first quarter of FY21 is likely to see a decline, a 5 percent quarter-on-quarter as some brokerages estimate, there is a silver lining — digital.

TCS is kicking off the June quarter results for Indian IT firms on July 9, followed by Wipro on July 14.

But will June quarter be really the worst for IT companies, considering the impact of COVID-19 outbreak? Going by narratives of analysts and executives, it is most probably going to be a mixed bag.

While the first quarter of FY21 is likely to see a decline, a 5 percent quarter-on-quarter as some brokerages estimate, there is a silver lining — digital. This include cloud and digital transformation projects, which clients are adopting at a much faster pace.

In FY20, IT firms' revenue did not see much of an impact and most of them saw strong order bookings. For TCS, March quarter of FY20 saw the highest ever order booking at $8.9 billion. Its revenue grew 0.9 percent sequentially during Q4 and for the year, the company grew 5.3 percent.

Its peer Infosys grew 4 percent sequentially in Q4 and saw 8.3 percent growth for FY20. HCL Tech’s FY20 revenue grew 13 percent and Wipro’s growth stood at 1.6 percent. For these firms too, the pandemic did not impact order bookings.

However, top IT firms withdrew guidance (TCS does not provide revenue guidance) at the back of uncertainty COVID-19 presented. In addition, in April, analysts and executives Moneycontrol interacted with pointed out that June quarter will bear the brunt of COVID-19, which intensified in the fag end of March.

This included drop in client discretionary spending to the range of 5-15 percent, project cancellations and deferrals and pricing pressures. Infosys and Wipro in their US Security and Exchanges Commission filing said that COVID-19 is likely to impact their revenues and profits.

Some brokerages pointed out that recovery was expected from September while others said recovery won't happen before January 2021. 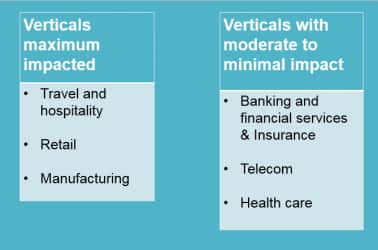 The verticals that saw the highest impact were travel and hospitality manufacturing and retail whereas healthcare and communication will see minimal impact.

Tech spends continue to happen in banking and financial services and insurance, one of the largest revenue generator for IT firms. However they are now facing deferred loan payments and insurance sector is compelled to charge lower premiums in some categories, pointed out Nandan Nilekani, chairman, Infosys, during the recently concluded AGM.

The pandemic apart, slowdown in developed markets such as the US, UK and Europe will not help either, resulting in tepid Q1 results. But if the recent Accenture Q3 FY20 results are anything to go by, the situation could be better than anticipated. The largest IT services major reported 1.3 percent year-on-year growth led by healthcare and public services with strong order booking.

The firms high exposure to digital (close to 70 percent) also helped, according to a brokerage reports.

Though it might not apply for Indian IT service providers, recent commentary by executives is encouraging.

Track this blog for latest updates on the coronavirus crisis

Speaking at the 39th Annual General Meeting that was held virtually, Salil Parekh, CEO, Infosys, said in April, the company anticipated business impact in deal closures and longer decision cycles at the back of the pandemic.

"However, the business impact is less than what we had envisaged in April since many of the economies opened up with strong government fiscal monetary support. We have not seen large scale cancellations. Overall we see increase move to digital and we are assisting them more and more in this regard," Parekh said.

Also Read | India-China border standoff: Another setback for IT firms looking to expand in the region?

This could reflect in other companies' results too with Wipro, HCL Tech and TCS well-poised to tackle the pandemic, analysts point out. Digital account for about quarter of IT firms’ revenue and they are growing at the rate of 35-40 percent. Growth from digital, and verticals such as healthcare will to some be key drivers.