The devastating impact of COVID-19 on Indian workforce can be assessed from a survey which has revealed that one in 10 active job-seekers has been handed the pink slip.

Naukri.com rolled out the survey to 50,000 active job-seekers, seeking their views on the jobs market, career progression and increment expectations. 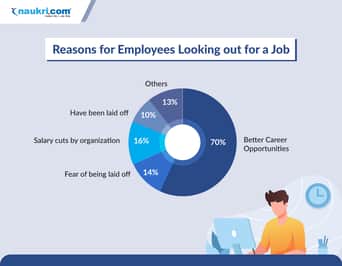 Here, around 13 percent of the laid-off employees were senior professionals with more than 11 years of work experience and were working in either sales (12 percent), HR & administration (12 percent), marketing (11 percent) or operations/supply chain (11 percent) roles.

The survey also noted that job-seekers from the IT, pharma, medical/healthcare and BFSI industries were less affected by layoffs and salary cuts compared to their counterparts from other sectors.

As far as job change is concerned, 70 percent of job-seekers are scouting for better career opportunities followed by 16 percent due to salary cuts and 14 percent due to the fear of being handed pink slips.

Track this blog for latest updates on the coronavirus outbreak

"While only 10 percent job-seekers confirmed that they have been laid-off as per the survey, almost 34 percent fear that a layoff is imminent. On the positive side it is heartening to see that more than 50 percent of jobseekers are focusing on upskilling for better career opportunities and that is a sure shot way of long-term career growth," said Pawan Goyal, Chief Business Officer, Naukri.com.

With respect to upskilling, data science & analytics courses (22 percent), followed by digital marketing (20 percent), and finance/risk management (16 percent) were amongst the top courses being picked up by job-seekers to brush up their skills.

What about imminent layoffs and salary cuts?

There is a mixed feeling around layoffs and salary cuts amongst job-seekers. About 41 percent of the job-seekers were positive that layoffs are not likely to happen in their organization. These jobseekers were mostly from the BFSI, IT and pharma industries suggesting a relatively higher job security sentiment in these industries. On the other hand, 59 percent of the job-seekers, mostly from the airlines, hospitality, e-ccommerce and BPO/ITES industries, confirmed that the layoffs are either already announced or most likely to happen in the coming days.