New projects may flow in another 6 months- 1 year: HCC

Ajit Gulabchand, Chairman, HCC told CNBC-TV18 that the issue of payment to the industry is yet to be sorted out.

In an interview to CNBC-TV18 Ajit Gulabchand, Chairman, HCC spoke about the latest happenings in his company and the way ahead.

Speaking from the sidelines of the IDFC Annual India Conference he said that while the new government is taking efforts on the policy reform front, no real new investment is being seen yet. According to him, it will take at least another six months to one year for new projects to come in.

Meanwhile, the company is yet to decide on the timeline for launching the Lavasa IPO, he added.

Below is the transcript of Ajit Gulabchand's interview with CNBC-TV18's Menaka Doshi and Senthil Chengalvarayan. 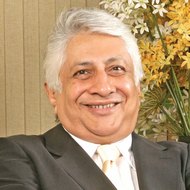 Menaka: I hope you have good news regarding the economy. You have had a good quarter that went by, your results were good. Can you talk us through whether you are seeing even the first signs of a potential revival in the investment cycle?

A: In terms of optimism good things are going to happen. You see a government that is quite determined to make that happen, is working on a variety of policy and reform framework to make the change happen. However, they have been confronted with the debris of the last government’s bad policy that is still cluttering the change story or coming in the way of the change story. So, they need to tackle that.

There is still lot of money to be paid back to infrastructure companies. There are still new rules and procurement policies to be created for concession and concession agreements as well as for construction EPC contracts. At the same time, the issue of payment to the industry is still to be sorted out effectively.

Senthil: When you say effectively, we have spoken to you earlier, we have spoken to other people in infrastructure, one of the big problems has been government payments getting stuck. Are you seeing signs that that is going to improve?

A: So far they were confounded by the problem, unable to see how to do this and afraid to act because it is about giving away money. However, they are now seeing that without de-clogging this we are not able to go ahead. So, I expect in a month or two we will see a lot more constructive and new ways of solving the problem, this is how I would put it. They are realising that most of this is coming in the way of the change they want to deliver. Take the Company Law Bill for example. It is a disastrous bill. Nobody can do serious business under that. There are such issues that are coming in the way which they will have to de-clog, they will have to amend this act. They will have to amend the Land Acquisition Bill, all these are now underway. As you can see from today's announcement on environment, they are talking of a sensible way to manage the environment by giving clearances in a more transparent, effective way where everybody knows where they are going. So, they are on the right track, but they are not there for me to say that it has happened.

Menaka: Can you give us your assessment of when you think given that you believe that the government is doing all the right things, when do you expect the investment cycle to start pocking up realistically? A sense of how many quarters away are we from that pickup in the economy?

A: I personally believe it will depend on sector to sector but still so far no real new investment has happened. However, projects are getting announced by the government for the first time in 2-3 years and that is a good sign. I would expect that anywhere between six months to another year it would take for government to de-clog the thing to move forward.

Menaka: Six months to a year for new projects to start coming in, is that what you mean?

Menaka: That would mean at least a year and a half to two years for any of this to start showing up in the financials of companies like yours?

A: Financials of a company have a slightly different metrics. Everybody has become leaner due to the bad period and they are likely to show better results to some extent. However, when you talk of investment climate where you talk about actual investment and a serious growth happening in the economy then yes it will take that much time.

Menaka: Amongst the various infrastructure sectors that you all work in where are you seeing the signs of a pickup first? Would it be may be in the most beleaguered sector of power, do you see that come through may be in roads, can you give us some insights?

A: Hydel power, roads, when it came to fuel based power like coal and gas because of the coal mines disaster there was a problem. However, the government has acted quite swiftly in passing that order so that you can get back to mining as quickly as possible. Even that is not going to happen right away, it is going to take another year to happen but the fact is that they have acted. So, year later you are sure that it is going to happen. You could see a lot of things in action but not completed enough for it to have a direct impact on the actual investment or actual growth.

Menaka: The last time when we spoke to you in detail you had brought up this issue of pending payments from the government. You clarified today that none of those have come through as yet but you are hopeful. The other issue that you had brought up is certain asset sales to be able to deleverage your balance sheet. Have you had much luck in that and can you talk us through what the programme for that is hereon?

A: I would have liked to see a better result of asset sale till now. We have not been able to do that well but we are still on track as per our original plan. However it has been a difficult period but I expect some improvements will now come as the sentiment improves in the economy and which has distinctively improved, I am not talking about only optimism. New projects seem to be on the way, there is visible order book of infrastructure industry.

Till two years ago it used to be about USD 110 billion a year at the beginning of the year. It dropped to less than USD 30 billion and now that is beginning to show some signs of revival. It has not gone to that original figure but it is moving in the upward direction and that is a very healthy sign. That is the first sign that projects are going to happen. So, far the projects were not happening the money was stuck and there was nothing insight that said this is all going to happen quickly, now that has gone. They are working on it, you can see that, the money problem is very difficult given the climate in the country but they will find a way when they really know that they can't go beyond without solving this.

Menaka: You were expecting to raise roughly between Rs 500-700 crore in this financial year through asset sales. Have you found takers?

A: It has not been so easy so far but we still hope we could be able to achieve the targets.

Menaka: By the end of this fiscal itself or are you stretching it out a bit?

Senthil: How much of these asset sales will you have to go through? If the money that the government owes you should come say in the next 3 months, will you pare down your target for asset sales?

A: Asset sale is not for selling assets it is for reducing the debt. So, if there is a windfall from somewhere and we can reduce the debt why would we sell the assets? We might still them but it is not compulsory. The whole objective is to deleverage it is not to sell the assets. However having looked at sale of assets we might finding it interesting to sell it anyways.