Upcoming Webinar:Join us for Sustainability 100+ Dialogues 2021-Maharashtra Roundtable& know how the state is progressing on climate action
you are here: HomeNewsBusinessCompanies

The New Development Bank being launched by the BRICS group of emerging economies plans to raise money both on local markets and internationally, its president said on Thursday.

The New Development Bank being launched by the BRICS group of emerging economies plans to raise money both on local markets and internationally, its president said on Thursday.

The bank, with an initial capital of USD 50 billion, is being introduced at an organisational summit of the BRICS countries - Brazil, Russia, India, China and South Africa - in the Russian city of Ufa.

The summit is a showcase for Russian President Vladimir Putin, and comes at a time when Moscow's ties with the West are strained because of the Ukraine crisis.

Kundapur Vaman Kamath, 67, a former executive with India's largest private bank, ICICI Bank, was appointed president of NDB in May this year. The bank is headquartered in Shanghai, China.

The bank, which the BRICS countries see as an alternative to the World Bank, will have its capital expanded to USD 100 billion within the next couple of years. It plans to issue its first loans, yet to be agreed, in April - a plan K.V. Kamath said was on track. 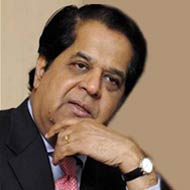 He added that the NDB will seek international and local agencies ratings - a necessary step for issuing debt.

"We are a clean sheet of paper, so I will get to Shanghai this week, (or) next week and we will sequence it," K.V. Kamath said when asked on timing for getting ratings cleared.

Russia has been hit by Western sanctions over its role in the Ukraine crisis, measures that limited access to foreign financing for many large firms and banks, such as the state oil company Rosneft, private gas producer Novatek  and Russia's biggest bank, Sberbank.

K.V. Kamath said that the NDB should not be viewed as a tool to help sanctions-hit companies but said the bank will look at requests from Russian companies.

"We are not looking at it in that context at all ... We will look at any proposal that the government or entity in the country wants us to look at," he said.

Russian Finance Minister Anton Siluanov told reporters this week that some projects, such as a request by Rosneft for financial support, may be listed for possible NDB funds.

K.V. Kamath added that there were no specific deals yet in the pipeline and no limit had been set on the size of loans.

The size of the loan "will depend on what is the structure of the loan, what is a need of a borrowing country and then we will look at it," he said.

"Our mandate is very wide... We believe that development happens in infrastructure so primarily we are focusing on that."