NASSCOM to wait for more earnings before reviewing FY17 guidance

In an interview to CNBC-TV18, R Chandrashekhar, President of NASSCOM said a lot of short-term cues are negatively impacting IT industry.

In an interview to CNBC-TV18, R Chandrashekhar, President of NASSCOM said a lot of short-term cues are negatively impacting IT industry.

However, outlook for IT industry does not look negative over a long-term, he added.

He further said that slowdown in BFSI sector might impact earnings for a couple of more quarters.

Hence will wait for results of some more companies before revaluating guidance, he said.

Below is the verbatim transcript of R Chandrashekhar’s interview to Ekta Batra & Prashant Nair. 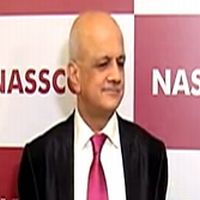 Prashant: We have had numbers from Tata Consultancy Services (TCS) and Infosys and the picture that we are getting for the quarter which has just gone by and also for the full year FY17 is pretty bleak. In the case of TCS full-year constant currency earnings expectations have been brought down to about 7.5-8 percent. Infosys by its own guidance is saying we will only grow between 8 and 9 percent. Are these numbers, without going into company specific details, but these are bellwethers. Is the industry outlook looking dimmer than before?

A: A lot of these things were looming for some time now and post the first quarter results we had shared that there have been a number of short-term factors which were having a negative impact on the industry. We also indicated that if you look at it from a medium or a longer term perspective, things still did not look negative or bleak because the overall scenario still seems pretty much on track to what we had projected in terms of a long-term prognosis.

However, if you look at the results that have now come out, it is a half empty cup. You can find, depending on what you are looking for, you can find parts which are good and parts which are not so good. If you look at some of the more positive aspects, what we are seeing is that because of the short-term impact of things like Brexit in terms of currency haven played themselves out, the short-term impact in terms of banking, financial services and insurance (BFSI) in the US or political developments in the elections in the US is something which is also coming to an end.

So, the short-term factors which had a negative impact are, I would say, pretty much petering out. However, what we will continue to see of course is factors which have a longer term or a sustained impact like the overall change in the industry more towards digital, change in the deal sizes, increased pressure on margins and so on. And then we are seeing green shoots in terms of some companies doing well. If you look at it on quarter-on-quarter (Q-o-Q) of 3 percent or more is actually a very positive thing although it will be sustained or not is another question.

So, at this point, it is a slightly mixed bag. We continue to see, as we have said in the past, a likely downward trend from what was envisaged at the start of this year, but still nothing much to be alarmed about and nothing that we see as a more secular or persistent impact going forward beyond the short-term.

Ekta: If you could define short-term for BFSI because we have heard the Infosys management talk about how it could be transient in nature. It could be limited to one to two quarters, but the long-term outlook is intact for BFSI. But a lot is happening in the European banking space which is rising to a lot of uncertainty, at least in the near future. So, if you have to quantify about a transient problem in BFSI, where would you limit it to? Do you think it could spill over to next year or limited to FY17?

Ekta: So, BFSI could be limited up to FY17, the second half of this fiscal?

A: Yes, I would think that all those factors which we are listing as short-term, the short-term impact by definition almost would not run beyond a couple of quarters. If you look at Brexit as an example then the short-term impact of Brexit is the kind of currency fluctuation which we have seen and the impact that it has on the industry and on the numbers. And that has pretty much, I would say bottomed out in terms of immediate currency impact of the referendum and the decision, but if you look at, what is the overall business impact in terms of businesses being set up there or moving from there or the prospects for business there, then that is something which is going to play out over at least a couple of years. So, we are talking about medium-term then.

Prashant: According to a survey conducted by the big financial services body in UK, the cost of a hard Brexit was calculated at about pounds 38 billion, but that is over a period of time. But, let that be, I just want to ask you is NASSCOM going to lower its guidance for the full year?

A: Let me touch on two parts, although the first part you did say that let that be. I do want to mention that the impact of Brexit, the overall numbers which people might come out with, that is certainly a job for economists, we do not get into that, but, if you look at a longer term perspective, then as far as this sector is concerned, there could be positives as well. We have outlined that earlier. One sector’s problems could be an opportunity for other sectors. So we do not see the medium or longer term implications of Brexit as being necessarily negative for this industry, the short-term has been no doubts about it, but medium-term and longer-term, there are prospects. So that was one part.

As far as our guidance is concerned, as we had said, we do see conditions which warrant a correction downwards, the direction is clear and the probability of having the two changes also increasingly evident. However, as we said at that time, if you are looking at quantifying it because it is not just a matter of saying that the guidance is changed downwards, it is also saying to what. And to do that, we are seeing a variation across different segments of the industry. You have already seen results of companies which have been significantly different from each other in terms of the performance Q-o-Q.

Prashant: Are you closer to a downward revision?

A: I would say that once we get two or three other bigger companies then we will complete the process of re-evaluating the position and we will certainly then come back with an update on where we stand on the guidance. So, for us Q2 is the watershed which then brings us to the decision point.

Prashant: At this point, you are at 10-12 percent, what could it be broadly speaking at this stage?

A: You are asking me to tell you what will be the final evaluation after we see the Q2 results when we have only got some of them. What I am saying is that we clearly see the likelihood of having to make a correction but it is not definite at this point also because you look at the results and even if you look at Infosys, there is still a fair amount of speculation on what the final numbers would be. We do not comment on an individual company, we do not base our guidance on an individual company. For that matter, we do not base it even on the aggregation of all the third party vendors or all the Indian companies. We look at the multinational corporations (MNC), we look at the global in-house centres (GIC) and for example in GICs the growth has been pretty robust.

So, when we aggregate all of these, our exercise in revisiting the guidance involves looking at the Q2 results, seeing what is happening in the GIC, seeing what is happening in the MNCs and that exercise will be completed once we get the rest of the major Q2 results. However, that is something we have seen. I would not want to put a number or speculate at this point because that would not be correct but there are factors which are increasing likelihood of the revisiting it resulting in some kind of correction.