In many ways, Goyal has been an antithesis of Mallya.

The change in Naresh Goyal's stance was telling.

He had been vociferous against the then UPA government's plan to allow foreign direct investment in the aviation sector. The FDI, if permitted timely, would have benefited competitor Vijay Mallya's Kingfisher Airlines, which needed immediate funding to clear debts, fly grounded aircraft and re-start truncated operations.

But by the time the FDI nod came in September 2012, it was too late. Kingfisher, which was hoping to sell a stake to Etihad Airways, closed operations a month later. Its license was revoked in February 2013.

Within a couple of months though, Goyal was singing a different tune. In April 2013, he stood proudly beside senior officials of - surprise, surprise, Etihad Airways - announcing the FDI into Jet Airways. The Abu Dhabi-based airline had taken a 24 percent stake in Jet Airways for Rs 2,050 crore.

Goyal, the behind-the-scenes networker, had again got the better of his flamboyant adversary.

And now, six years later, the founder chairman of Jet Airways, has again done what Vijay Mallya couldn't pull off.

Circumstances around Jet Airways in the last year couldn't have been more similar to what Kingfisher was facing in 2012. High crude prices and low fares led to piling debt and losses. And a bad acquisition (Kingfisher acquired Air Deccan, and Jet Airways bought Air Sahara) made a recovery an even more uphill task.

Goyal has not just managed to keep Jet Airways afloat but also retain a stake in the carrier, while Mallya fled the country.

Jet Airways lenders now have two months time to get a new owner for the airline.

The rescue deal, not surprisingly, infuriated Mallya. In a series of tweets, the former liquor baron criticised banks for "double standards" and said, "Only wish the same was done for Kingfisher."

Many agree. Mallya, who overnight turned from 'king of good times' to poster boy of crony capitalism, has valid reasons to be disgruntled, say industry insiders.

"Jet Airways got a lot of support, including from the government, which Kingfisher didn't," says a senior executive from the industry.

"He is totally right in complaining," says a former senior executive at a private airline. "Mallya was undone by banks, government and the media," added the person.

The two businessmen couldn't have been more different.

One was an inheritor who ably shouldered the family business after the untimely death of his father and built it into the largest liquor business in the country. And Kingfisher Airlines, after its launch in 2003, seemed like a successful diversification. 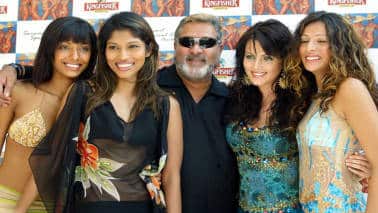 Its brand embodied Mallya's lifestyle, which was by now making more news than the then-billionaire's business. Often pictured chomping on a cigar and with a beer in his hand, Mallya's diamond-studded ears sparkled for the shutterbugs, and he loved to pose with the scantily-clad models of Kingfisher Calendar.

Goyal, who was now wary of Jet's fast-growing competitor, was an antithesis of Mallya.

Instead of models, Goyal loved to be photographed with ministers and politicians and hosted them in Jet Airways' latest aircraft. His easy access to the power corridors helped Goyal see off many a competition, including the grounding of Tata Sons' aviation dream in the 1990s.

While Mallya lived his life under public glare, especially after becoming a Member of Parliament, Goyal, a former travel agent, was away in London, after having turned an NRI. Even as he networked with the who's who of global aviation industry, Goyal preferred to let the professionals in the company brief the media or address analysts.

That Goyal has survived - and even has a chance to make a comeback to Jet Airways - and Mallya is still crying hoarse from his English country estate; their stories could be a handbook on how to, and how not to, be a successful businessman in India.