Post-Yes Bank fiasco, the private banking industry is suffering from a major trust deficit. Some of the private banks such as IndusInd Bank and RBL Bank have witnessed erosion in their deposit portfolios.

However, banks like Kotak Mahindra and HDFC Bank have bucked the trend. On April 6, Kotak Mahindra Bank said its deposits have grown by 11.7 percent since December 2019. The total deposits of the bank  grew from Rs 2.31 lakh crore on December 31 to an estimated Rs 2.58 lakh crore in March 2020, the bank said in a regulatory filing.

At the same time, net advances have grown nearly flat on a quarter on quarter basis to Rs 2.19 lakh crore, the  bank said. 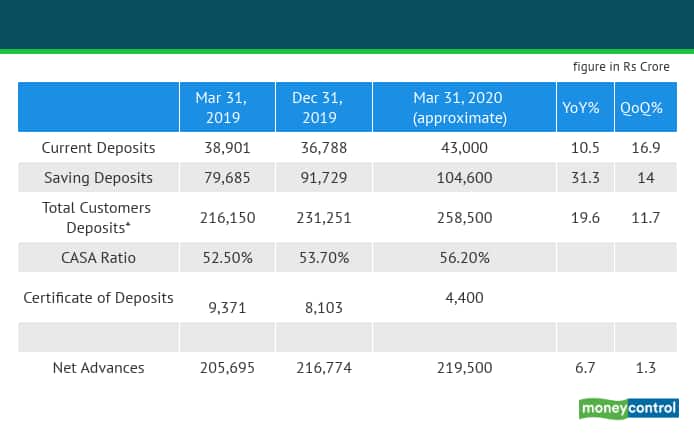 On April 5, HDFC Bank also announced that its deposits have grown by 7.4 percent in the January-March quarter to Rs 11.46 lakh crore.

But both IndusInd and RBL have witnessed a decline in deposits. IndusInd Bank in a regulatory filing on March 30 said its deposits have shrunk by 10-11 percent since Q3. The bank attributed much of this (about 70 percent) to some government- accounts moving money out of the bank and rest by corporate houses. The hit on the retail book was less, it said.

"This (fall in deposits) will also result in lower CASA ratio, but reduce our dependency on this category for deposits in future," the bank said. Similarly, RBl Bank said it has seen 8 percent decline in its deposit book.

Until Yes Bank's collapse, new-age private banks were seen as preferred entities for several institutions, including government entities, due to competitive interest rates and tech-enabled customer services. This image has taken a beating after the Yes Bank episode.