In the past, the government has received criticism for asking LIC to buy stake in ITC, a tobacco company.

A vendor holds a cigarette pack printed with a picture bearing likeness to Chelsea's soccer player John Terry at his roadside stall in New Delhi January 3, 2012. A blurry picture of Terry appears on Gold Flake cigarette packets across the country with an anti-smoking warning was created by the Indian government's Directorate of Visual Publicity and got approved by the health ministry last year. The advertisement has triggered complaints from Terry's representatives, local media reported. REUTERS/Parivartan Sharma (INDIA - Tags: HEALTH SPORT SOCCER) - RTR2VU99

The Finance Ministry is considering to divest stake in tobacco companies, sources privy to the development have told news wire agency Cogencis.

This move comes after the Health Ministry raised concerns over the exposure of government stake in tobacco companies, sources say.

Earlier this year the government divested 2 percent of its stake held in ITC  through the Specified Undertaking of the Unit Trust of India (SUUTI).

But this divestment had only one buyer, the Life Insurance Corporation of India, which picked up the entire 2 percent stake in ITC.

This move received much criticism, as many termed LIC picking up stake in a cigarette company morally wrong. Experts chose not to term this transfer of shares from the centre to one of its own arm as a divestment.

Speaking to Moneycontrol, JN Gupta, Co-founder and MD of proxy advisory firm Stakeholders Empowerment Services (SES) had said that in the real sense, "one arm of the government is the seller and other is the buyer, so at best it a resource [mobilisation] exercise by the government."

"The money that has been put in [by LIC to buy 2 percent in ITC] does not belong to the government but to the policyholders," he said.

It remains to be seen whether such a transfer of resources will again be effected by the government.

LIC already has 16.29 percent stake in ITC, which is anyway a violation of the maximum holding norms laid down by insurance industry regulator IRDAI.

IRDAI allows insurers to hold only up to 15 percent stake in one company.

While it is unlikely that India's biggest life insurer will buy further stake in ITC, given its affinity for the stock, it may not come as a surprise.

LIC Chairman sidestepped a question on why the insurer's stake in the company exceeds the threshold, only saying that "these are strategic investments for us."

In the past, the government's holding has protected ITC from hostile takeovers. It is this stake that kept British American Tobacco from acquiring a majority stake in the company.

A question of morals

Directly or indirectly, the government holds a significant stake in ITC. Through the SUUTI fund and state-owned insurance companies, the state has 30.25 percent share in the company as of March 31, 2017. 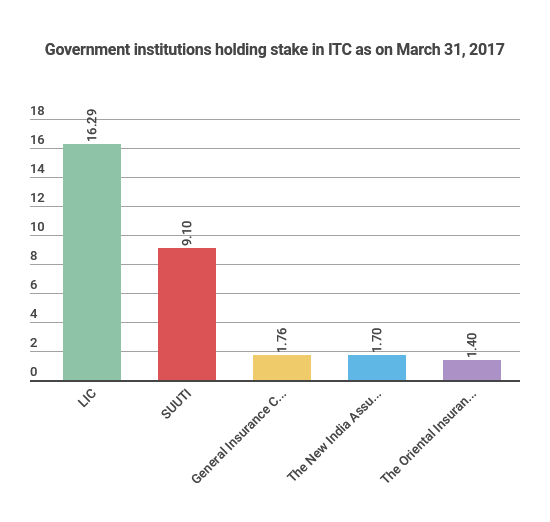