Excited about future of Uber in India with 1000s of job opp: CEO

Taxi aggregator Uber CEO Travis Kalanick today said his company is very excited about its future in India with increasing penetration of smartphones.

Taxi aggregator Uber CEO Travis Kalanick today said his company is very excited about its future in India with increasing penetration of smartphones.

"We are very excited about future of Uber in India. With hundreds-thousands of driver opportunity and jobs we have come here with, we couldn't be more excited to serve India and to work with sons and daughters of India who run Indian operations," Kalanick said after meeting Law and IT Minister Ravi Shankar Prasad.

He said that Uber has made amazing progress in India.

Uber operates across 73 countries. India has became the largest market outside the United States for Uber and accounts for 12 per cent of all Uber trips globally. 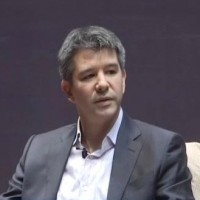 Bier has set up its first engineering centre in Asia at Bangalore and has added over 500 employees across India.

"Large part of the infrastructure has been laid out in India where over billion people have phones and large percentage of them own smartphones," Kalanick said.

Kalanick said that when such infrastructure is rolled out, people like him go around to such places and help people generate income opportunities.

Uber has announced UberSHAAN skill development initiative in India with objective to empower one million micro-entrepreneurs by 2018.

Prasad said in the meeting they discussed opportunities in spreading digital literacy, clean India campaign among others.

"What impressed me more that after demonetisation drive, started, nearly 50 per cent of payment to Uber is through digital platform which earlier used to be only 20 per cent," Prasad said.

"We found some very interesting trends in 2016, including, that of a rider in Bangalore, India, who took almost 3,135 trips, making it the highest number of rides taken by a single rider, globally," Uber India and South Asia President Amit Jain said.