172@29@17@245!~!172@29@0@53!~!|news|business|companies|dealmakemytrip-to-help-get-offline-mkt-online-ibibo-chief-956030.html!~!news|moneycontrol|com!~!|controller|infinite_scroll_article.php!~!is_mobile=false
Subscribe to PRO at just Rs.33 per month. Use code SUPERPRO
you are here: HomeNewsBusinessCompanies

Sharing the contours of this mega deal Deep Kalra of MakeMyTrip and Ashish Kashyap of ibibo group told CNBC-TV18, more than competitive pressures, the objective of the merger is to bring the offline segments of the travel market online.

Travel portal MakeMyTrip Tuesday announced a merger with the Ibibo group which runs online portals like Goibibo and Redbus.

Sharing the contours of this mega deal Deep Kalra of MakeMyTrip and Ashish Kashyap of ibibo group told CNBC-TV18, more than competitive pressures, the objective of the merger is to bring the offline segments of the travel market online.

Many of the segments within the travel and tourism industry like bus bookings, hotels and even to a large extent international air ticket bookings are still underpenetrated in terms of online presence. The motive is to bring all these online and find opportunities to cross-sell products, they said.

The deal has been signed today but its closure is subject to clearance from the Competition Commission of India and the process might take up to a quarter, Kalra said.

Below is the transcript of Deep Kalra and Ashish Kashyap's interview to CNBC-TV18's Shereen Bhan.

Q: Let me start by asking you who approached whom?

Kalra: Let me put it this that we did last time we have had a couple of interactions in the past done by people known to both sides. I enjoy a nice healthy rapport with Ashish, believe it or not met him at a party and started off the conversation early this year.

Q: We are given to understand is that MakeMyTrip will be issuing fresh equity, can you take us through the details?

Kalra: I will shared with you what is public information now and very happy to discuss that. The fundamental to this deal and it is the coming together of two large groups, in fact, Naspers who are 100 percent owners of Goibibo as well as redBus and that is part of the deal and at the end of this transaction MakeMyTrip (MMYT) will own a 100 percent of both Goibibo and redBus in return for which Naspers will own 40 percent of MMYT thereby becoming our single largest investor and then there will also be some adjustments in cash towards the working capital and proportionate working capital being contributed by Naspers.

Now closing and signing in large transactions does take a while, so the signing has occurred today. The closing is subject to couple of approvals noteworthy among that is the Competition Commission of India approval, which will take it own due course. It could take up to a quarter depending on the commission and only after that will the companies truly be able to get consolidated and us be able to report consolidated financials.

Q: Why the decision to merge with MakeMyTrip? Was it getting increasingly difficult as the competitive pressures increased to function as a standalone entity?

Similarly if you look at the other significant category that we operate which is the bus ticketing business via our brand RedBus, that is again very much under penetrated at 15-16 percent. In fact the unorganised bus segment hasn't even started using mobile and internet to manage inventories and yields and there is a lot of work to be done on that front.

Even the air ticketing side, the outbound side that is also right now really small. The only category which has got some penetration is domestic air, other than that this market is totally under penetrated. With alternate accommodation, alternate transportation between cities, towns, villages, imagine two small villages getting connected through organised form of transportation.

Q: You of course will be joining the executive council and the executive management team at MakeMyTrip, but what about your team at Ibibo, does everyone stay become part of the merged entity?

Kashyap: At a very simple level strong brands are going to co-exist and those consumer facing brands obviously need to run for those there would be structures around for brands some would exist and some of course we will further enhance that really the plan and obviously a little early for us to talk about given that it will take another 3 months to close the transaction, but I am obviously looking forward to working with on a larger platform. 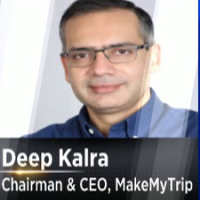