A heavy reliance on one distribution channel, namely banks, is beneficial for insurers by helping have higher-ticket-size policies.

In December 2020, a mid-sized private life insurance CEO found out that their bank partner, a South India-based private lender, was in talks with a rival firm for a possible tie-up. It was a problem because the insurance company got half of its revenues from the bank.

The CEO acted swiftly and met the top management of the bank to thwart a break-up. He was successful and after three meetings the bank agreed to stay 'exclusive'.

The CEO is not the only top executive worried about his insurance company's dependence on a bank.

Take Max Life for instance. A total of 55 percent of its individual premiums came in from Axis Bank which is its partner. Or PNB Metlife where Punjab National Bank accounted for 53 percent of the individual business in FY19. For Aditya Birla Sun Life Insurance, a chunk of the business came from Karur Vysya Bank.

A heavy reliance on one distribution channel, namely banks, is beneficial for insurers by helping have higher-ticket-size policies. However, over reliance on banks also means that these entities would be allowed to dictate terms to the insurer but strategy change in a bank may also impact sales of insurance. 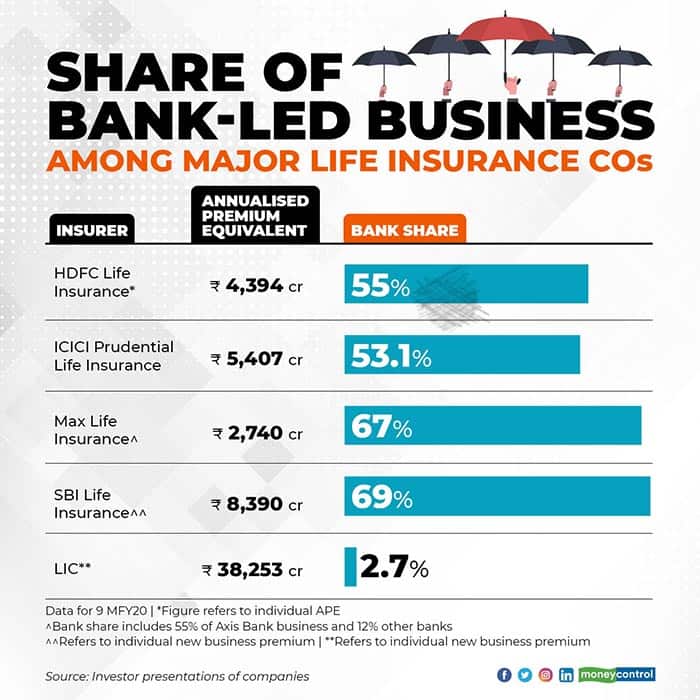 “For banks, insurance brings fee income. But this is not their core business and hence the focus is not big on renewals,” said a Mumbai based insurance consultant who also advises companies on bancassurance deals.

Retention of partner banks is also a core focus for private life insurers, with higher-than-permissible commissions also being paid. The insurance regulator has also imposed penalties on multiple occasions for these violations.

Bank-led insurers have an average premium of Rs 71,000, while a non-bank life insurer’s average premium was Rs 58,523, according to data collated from the Life Insurance Data and research reports.

Bajaj Allianz and Tata AIA are some of the insurance companies who don't have huge exposure to banks.

For private sector players, almost 52 percent of the individual new business premium comes from banks, as per Life Insurance Council data. With easy access to thousands of bank branches and their customers, bancassurance is the top-most option for insurance distribution.

An analysis done by Moneycontrol showed that for the top five private life insurers, banks account for 46.4 percent of the total new business premium. Any drop in sales performance by banks due to a rejig in business strategy with rising bad loans and focus on core business would directly lead to a new premium collection dip for insurers.

For listed private life insurers, this would mean an impact on their topline and also a possibility of this translating into erosion of its share price.

Is it a concern?

In the past, there has been a concern about banks misselling insurance products to their customers in a bid to ramp up their total income.

Moneycontrol spoke to three public sector bank executives at the branch level who revealed that they are in fact nudged to sell either personal accident or a basic term cover with every new account opened.

“We tell the customers that the account opening process will be processed only if the insurance is purchased,” said a branch executive in Mumbai on conditions of anonymity.

IRDAI data showed that out of 61,137 complaints filed against private life insurers, 45,294 complaints pertained to unfair business practices commonly known as ‘misselling’. Considering that banks command a lion’s share of the business, it is a fact that bank-led complaints would constitute a major portion of the complaints.

For ICICI Prudential Life, data for eleven months of FY19 showed that 49th month persistency stood at 62.7 percent in bancassurance, while the figure stood at 64.9 percent in agency channel and 66.5 percent in direct channel.