Falling production is likely to add worries to the prices, however, the demand/usage of metals and ores is also forecasted to remain strong especially in China and other Asian countries with positive economic reports in India.

Zinc prices traded weaker at Rs 221.55 per kg on April 12 as participants reduced their long position as seen by the open interest. The base metal extended decline after a gap down open to trade at day’s low.

The industrial metal had declined Rs 9.4 or 4.31 percent last week on the MCX.

The non-ferrous metal has been trading higher than 20, 50, 100 and 200 days' moving averages but lower than the 5-day moving average on the daily chart. The Relative Strength Index (RSI) is at 50.69 which indicates neutral momentum in prices.

Industrial metals declined to negative terrain after China’s Premier Li Keqiang stressed the need of controlling the prices of commodities that have burdened industries.

According to the International Lead and Zinc Study Group (ILZSG), the global zinc metal production for January 21 has fallen to 1,190.2 thousand tonnes, higher compared to 1,212.6 tonnes in the preceding month. Zinc usage has been reported to be lower at 1,178.5 tonnes for January 21 compared with 1,181.1 thousand tonnes reported during December 20.

The US dollar trades lower at 92.10, or down 0.06 percent in the evening session against rival currencies.

“Fundamentally for the month ahead, we expect Global and MCX Zinc futures to trade bullish after the reports of recovering economic data in the Asian markets and the United States. This is expected to increase the demand in the international markets as mining work and refined metal production is expected to rise”, said Sunand Subramaniam, Senior Research Associate, Choice Broking.

Falling production is likely to add worries to the prices, however, the demand/usage of metals and ores is also forecasted to remain strong especially in China and other Asian countries with positive economic reports in India, Subramaniam added. 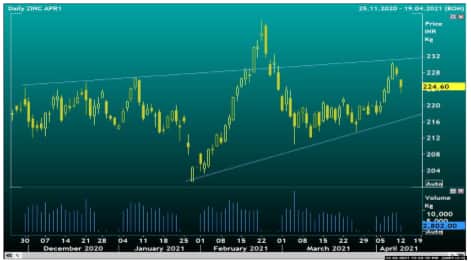 Geojit Financial Services Limited said, “Intraday move is expected to be southbound if prices remained below Rs 226 region. But a direct rise through the above-mentioned region could set off intraday buying.”

Disclaimer: The views and investment tips expressed by experts on Moneycontrol.com are their own and not those of the website or its management. Moneycontrol.com advises users to check with certified experts before taking any investment decisions.
Sandeep Sinha
TAGS: #Business #Commodities #LME zinc #Market news #Zinc #Zinc Fundamentals #Zinc outlook #Zinc Technicals
first published: Apr 12, 2021 09:24 pm