Even after a face-saving deal cobbled together, markets are cautious as it cannot see how such a disparate group of producers maintains these sorts of cuts beyond a few months.

WTI prices went negative - meaning that anyone trying to sell a barrel would have to pay a buyer $39 (as the WTI May contract went on to as low as $39). Blame the Coronavirus related slowdown and Saudi Arabia flooding the markets with over production as those Bahri-chartered VLCCs are heading for the US Gulf Coast producing yet another 'perfect storm' for US oil in about 10 days' time as 50.54Mbpd are arriving in May. Traders were keen to offload those holdings to avoid having to take delivery of the oil and incur storage costs.

OPEC+ ministers also held a conference call, given the pressure we are seeing The Texas Railroad Commission also met, but there was no decision n the market at the moment. Group has not decided on any new policy moves, although pressure to something will likely build in the coming days and weeks. The issue for OPEC+ is that there is a limit to how much they can do. They are already set to implement record cuts, and it will be a struggle for them to stomach further reductions. Instead, the group should have agreed that cuts start as soon as possible after the deal was struck earlier this month. It is a bit late for that now. 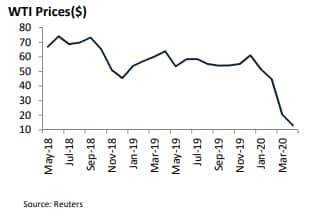 The Texas Railroad Commission also met, but there was no decision made on mandated production cuts in the state. This means that the market will likely have to wait until May 5 for any further news from Texas, as this is when the commission meets next.

Refineries are unwilling to turn oil into gasoline, diesel and other products because so few people are commuting or taking airplane flights, and international trade has slowed sharply. Lockdowns across the world and not least in the US had led to record levels of gasoline stocks and record low gasoline consumption in the US. Cushing in Oklahoma is the storage and delivery hub for WTI crude oil. Oil is already being stored on barges and in any nook and cranny companies can find. Giant oil tankers are being used to hold record amounts of crude at sea due to a global oversupply that threatens to overwhelm the world’s storage facilities.

WTI crude collapsed to minus 40 dollars per barrel was another stark reminder of the impact the Covid-19 pandemic is having on global fuel consumption and supply chains as storage capacity on land has filled up quickly. The pricing point for WTI is Cushing, Oklahoma. With a capacity to hold 80 Mbpd, Crushing there was 55 Mbpd oil already  stored near Cushing and inventories are rising currently at rate of 6-7 Mbpd per week and it will be filled to the brim in May. 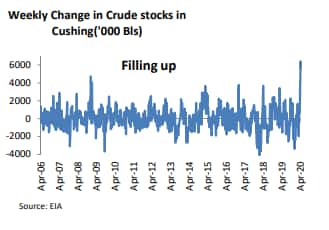 Outside the US, many oil-importing countries have stored large quantities of oil, taking advantage of cheap prices that may not last. Storage is almost completely filled in the Caribbean and South Africa, and Angola, Brazil and Nigeria may run out of warehousing capacity within days.

Commodity traders are hunting for extra space to store their crude as demand for oil collapses by 35 Mbpd in April, falling to lows not seen since 1995 as storage capacity on land has filled up quickly as oil storage levels across the world’s storage facilities have climbed to about three-quarters full on average since January shutdown of major refineries in China’s industrial heartlands to stem the outbreak of coronavirus as a record 160M barrels of oil has been stored in supergiant oil tankers.

Many oil-importing countries have stored large quantities of oil, taking advantage of cheap prices that may not last. Oil producers, hoping to maintain their market share, have taken to storing their excess oil at sea, leasing tankers at high costs and are believed to be paying in excess of US$100,000-3,350,00 per day for each tanker. The last time floating storage reached levels close to this was in 2009, when traders stored more than 100m barrels at sea before offloading stocks when the economy began to recover.

WTI price is now lower than the cost of production, transport and storage as producers, in the short term, are accepting prices below their variable cost as long as they are able to pay some of the costs they will incur even if oil production shuts down. This could trigger an oil market collapse to an average price of between $10 to $20 a barrel in the second quarter of the year – from about $65 a barrel at the start of the year – and force oil producers to shut their wells. For Shale players, the next logical step will be shut-ins and bankruptcies, if these materialize in next month, then we can begin discussing optimism in June but shutting down oil wells and then restarting them when demand returns can require expensive manpower and equipment. Fields do not always recover their former production. The COVID pandemic reduced global demand for oil by about 35% with OPEC+ and other producers agreeing to cut production by 9.7 Mbpd, far less than the decrease in demand, leaving a huge surplus of oil on the market and no buyers. This whole OPEC+ cut enterprise looked hugely political. America wants to preserve jobs during an election year, Russia wants the US to lift sanctions particularly those placed on Rosneft Trading for its activity in Venezuela and Saudi Arabia does not want to fall out with U.S. OPEC+ doesn’t have appetite to go for further cut to stabilize markets and may let the markets work on fundamental factors.

Even after a face-saving deal cobbled together, markets are cautious as it cannot see how such a disparate group of producers maintains these sorts of cuts beyond a few months. Capacity is filling fast on land and at sea. Even if demand were to return to pre-virus levels, it would take a long time to burn off all that stored crude and the energy market is depicting that demand isn’t coming back any time soon, and there’s a supply glut.

One big problem for US traders now is how to price their crude if they cannot rely on prompt Cushing prices as a stable benchmark. Do they move to a further-forward Calendar Month Average basis such as that used in Canada? Or perhaps, switch to a different benchmark altogether like Brent? Or ride out the storm until the May trade rolls into June and hope that the extreme volatility is not repeated next month? With the oil market reeling from the impact of the coronavirus outbreak, perhaps the last thing US traders wanted was a fundamental doubt to emerge over their preferred pricing benchmark.

WTI prices can touch levels of $5 for June contract if flooding by Saudi Arabia is not regulated or even lower. Brent prices aren’t safer anymore, While Brent storage is more commonly on floating tankers and can move around the world, in contrast to much of the WTI crude that’s stuck in landlocked pipelines in the heart of the U.S., other producer countries need to look over their shoulder because Brent is not far behind, other crude benchmarks, and the world is running out of storage.

Can we see a repeat?

The short answer is YES. If markets won’t see an improvement over the coming four weeks the June contract, expiry on May 19, could suffer the same fate. There will be undoubtedly production cuts and bankruptcies across the US oil patch over the coming weeks. That combined with a potential small pickup in fuel demand may avert another collapse, but the risk remains very elevated.