The Relative Strength Index sustaining above mid-level of 50 and MACD above zero line indicating strength in price.

It ended the week with a gain of Rs 3,976 or 5.88 percent on the domestic bourse. Silver prices rose in two out of the five trading sessions on the MCX.

The semi-precious metal has been trading higher than 5, 20, 50, 100 and 200 days’ simple moving averages (SMA) and exponential moving average (EMA) on the daily chart. The momentum indicator Relative Strength Index (RSI) is at 63.50 which indicates bullish movement in prices.

The hybrid metal has started to add gain once again in 2021 after a brief correction from highs of Rs 77,950 it touched in March 2020.

The gold/silver ratio, which touched a record high of 127 on March 20, is trading at 65 levels, which is supportive of the metal.

Global industrial silver production is expected to grow at 8 percent in 2021. Demand pick-up could come from a recovery in vehicle manufacturing, electronics demand and from the solar sector.

The US dollar index depreciated 0.81 percent to close at 90.20 against the major cross. The dollar index ended with a loss of 1.15 percent during the week.

Kshitij Purohit, Product Manager, Currency & Commodities, CapitalVia Global Research Limited said, “Although the US dollar is losing ground against a large basket of currencies, silver is trading firm. This metal is trading lower since two sessions but it means the market has just pulled back a bit to take the momentum.”

“For the upcoming week, traders should keep an eye on Buy-on-dips opportunity in MCX Silver May future from the level at Rs 68,200. For such position, one should keep target around Rs 71,200 and stop loss at Rs 67,600”, he added.

The spot gold/silver ratio currently stands at 66.70 to 1 indicating that gold has outperformed silver.

World Silver Survey shows expectations for a rise in total silver demand in 2021 of 15 percent to 1.03 billion ounces, with a 26 percent increase in physical investment to 252.8 million ounces.

Net investment in silver-backed ETP (exchange-traded product) grew by 331.1 million ounces last year, 300 percent surge from the previous year. It is anticipated to fall by 55 percent, to a growth of 150 million ounces this year.

Mine production forecast to rise by 8 percent in 2021 as output recovers after last year’s pandemic-related disruption, which led to a 5.9 percent decline in global silver supply for 2020.

Silver Institute expected silver prices to surge towards $32 per ounce and peak – which is a clear 20 percent upside from current levels.

Jigar Dharamshi, Technical Analyst at Motilal Oswal said, “MCX Silver has reversed sharply from its low and is trading in higher highs and higher lows pattern which confirms strength in price.” 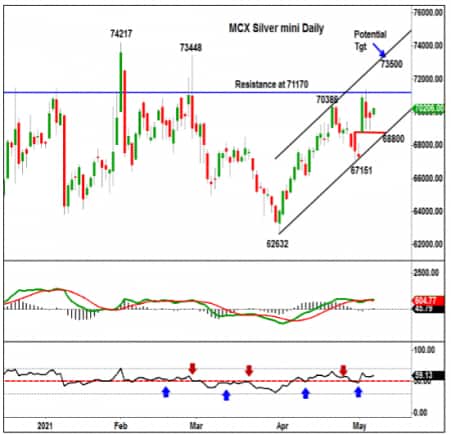 The Relative Strength Index sustaining above mid-level of 50 and MACD above zero line indicating strength in price. Price sustained trade above the resistance Rs 71,170 will lead the move towards Rs 73,500 area, followed by Rs 77,500. The supports are at Rs 68,800-68,450 levels.

Sachin Gupta, Senior Research Associate, Choice Broking said, “On a weekly chart, MCX Silver (July) future has been trading in Symmetrical Triangle pattern from the last couple of weeks. Moreover, the price has been moving above the 50 weeks SMA & Ichimoku Cloud formation, which indicates a bullish trend in the counter for the long term.” Also, a momentum indicator RSI (14) sustain above 60 level & Stochastic showed positive crossover on a weekly chart. We suggest a bullish movement in MCX SILVER (July) towards the level of Rs 72,500 in the near term, Gupta noted.