Selected Articles from
Financial Times on Moneycontrol Pro
Webinar :Register now for webinar on 'Trade BankNifty in just 15 minutes a day' - By Asmita Patel
you are here: HomeNewsBusinesscommodities

With no concrete conclusion coming out of the months long trade spat between Washington and Beijing coupled with narrowing global deficit, we expect MCX Nickel prices to go lower towards Rs 800 per kg.

Base metals continued their weak performance in April 2019 with LME Nickel and Aluminium being the highest losers of the pack.

Industrial metal prices declined over strengthening US Dollar and uncertainty over a possible trade deal between US and China. Strong economic data from US coupled with solid job growth supported the Dollar Index, and in turn, pressurised prices. 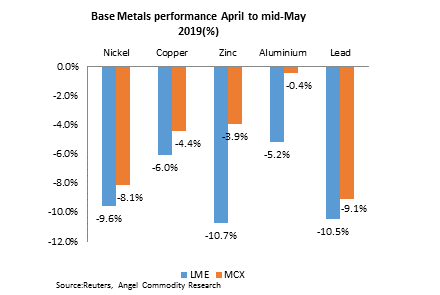 Nickel, the silvery white metal has outperformed most of the industrial metals in 2019 by increasing over 10 percent (YTD) on both the LME & the MCX.

Nickel was probably oversold in the latter half of 2018 over escalating trade tensions between US and China which raised worries of global economic growth and demand concerns for base metals.

However, Nickel got a dazzling start in the first three months of 2019. Prices rose over 18 percent on the LME as well as on the MCX, boosted by a potential demand for electric vehicles coupled with immediate worries emerging from the stainless steel industry.

Nickel’s high melting point and solid resistance to corrosion makes it useful in various sectors. Nickel is majorly used in the production of stainless steel alloys. Any movement in the stainless steel industry has a direct impact on Nickel prices.

A rally was witnessed in stainless steel prices following a fatal dam burst at one of Vale’s SA iron ore mining facility (On January 25, 2019) which raised supply concerns and pushed the prices higher.

After increasing the most amongst the industrial metals for the first three months, Nickel gave up some of its gains in April 2019 as prices declined around 7 percent on the LME whereas on the MCX prices declined over 5 percent.

Prices edged lower over rising global uncertainties coupled with the strengthening of US Dollar. Moreover, narrowing of deficit in the last couple of months and increasing the production of Nickel Pig Iron (NPI) in China and Indonesia further pressurised Nickel.

The United States and China have been at loggerheads for over 10 months now. The tariff dispute between the biggest economies in the world hampered the rise industrial metal prices in the latter half of 2018.

However, the trade dispute has shown signs of easing off in early 2019 as officials from both countries have expressed optimism over a possible trade deal.

Nonetheless, the optimism soon faded away as US President Donald Trump hiked the tariff rates from 10 percent to 25 percent on $250 billion worth of Chinese imports in the country. President Trump hiked the rates as China didn’t comply with certain norms agreed during the trade negotiations between the two nations.

The White House also blacklisted China’s telecom giant, Huawei which further ramped up the trade dispute. US added Huawei to its so-called entity list i.e. the local firms are now supposed to get a license from the US government to sell or transfer technology to that firm.

However, the officials of both the nations confirmed the trade negotiations will continue and they will try to bridge their differences.

Increasing global demand with strong fundamentals for Nickel might lead to a continuation of the deficit this year as well. But the global supply-demand numbers tell a different story. The global Nickel market was in a deficit of 127,600 tonnes in 2018. 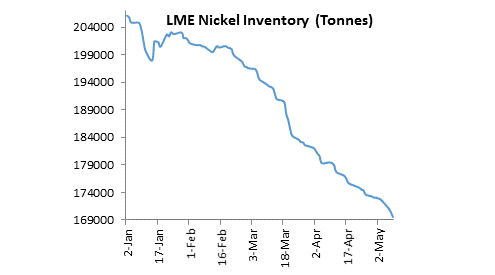 However, in 2019, the deficit narrowed in the first two months to 5,700 tonnes from 24,400 tonnes from a similar time frame last year. The market is still in deficit but well above the 2018 levels which have further weighed on the prices.

However, the inventory levels on the LME continued to fall from the beginning of this year till date, which points towards robust global demand.

China’s manufacturing sectors PMI declined to 50.1 in April 2019 after increasing to 50.5 in March, defying all signs of improvement in the economy of the world’s biggest metal consumer. China’s retail sales and industrial data were also weaker than market expectation. Even China's motor vehicle sales were down by over 14 percent last month pointing towards weaker domestic demand.

However, in the first quarter, China's economy grew at a pace of 6.4 percent as rising consumer demand showed signs of improvement.

To help their economy pick up China’s officials reduced the VAT on the manufacturing sector to 13 percent from 16 percent effective from April 1, 2019. Moreover, they also reduced the rate which applies to the construction and transportation sector from 10 percent to 9 percent.

Nickel is mainly used in stainless steel production, but it is also an important component of the lithium-ion batteries used in electric vehicles, which has boosted the demand for the silver-white metal. Higher proportion of Nickel in the batteries will allow the electric vehicles to go further on a single charge which might surge the demand.

China is preparing to be the hub for electric vehicles as it is one of the steps to fight their severe problems with pollution. As of now, stainless steel industry accounts for about two third of the total Nickel output but the increasing demand from the EV segment might change the ratio in the coming years.

With the electric cars coming up, Nickel has a very strong fundamental base which will boost the demand for the industrial metal. However, rising global uncertainties amid weakening of the economy of the world’s biggest metal consumer; China might weigh on the Nickel prices.

With no concrete conclusion coming out of the months-long trade spat between Washington and Beijing, coupled with narrowing global deficit, we expect MCX Nickel prices to go lower towards Rs 800 per kg.