The decision to not move the meeting up highlights the lack of urgency in the cartel for the coronavirus fears and waits to get a clear picture on how long coronavirus will have an impact.

China's shutdown puts OPEC and allies nations in an awkward position. Markets keep on assuming the virus clears up pretty quickly, but as the spread of the virus to Italy and Korea accelerate, the crisis could continue to grow worse. OPEC is worried about the slump in Chinese oil demand pressuring oil prices below the pain threshold of its members.

OPEC+ has a great responsibility as there is a greater need for OPEC and its allied to cut output more sharply and bring balance in the markets. However, the alliance between Russia and Saudi Arabia appears to be floppy as Russia has kept radio silence after Saudi Arabia recommended a cut of 6,00,00 bpd in its JTC meet.

Traders were waiting to hear whether Russia would be on board with deeper production cuts, but hopes were dashed as OPEC and Russia announced that it would not move up its March 5-6 meeting to discuss the options earlier than planned, implying that Russia was probably not on board, as suspected.

The decision to not move the meeting up highlights the lack of urgency in the cartel for the coronavirus fears and waits to get a clear picture on how long coronavirus will have an impact.

Back to Saudi Prince Abdulaziz’s call to treat the oil market as a house on fire — the question for oil traders is: how will he put out the blaze?

The decision can act as double-edged sword and crucial as if the global economy decelerates in 2020, OPEC+ would need to guard against propping up crude too much. But higher prices by OPEC+ decision would slow down recovery from Covid-19, especially in China and broader Asia, their most important market.

On the other hand, if prices stay at these levels, it will start hurting economies of Middle east especially Iran, Iraq where the cases of Coronavirus has led to slowdown and stoppage of transportation Many North African countries are already struggling with political and domestic conflicts, sanctions like Saudi Arabia, Iran and Libya and Nigeria. China is Saudi Arabia’s most important customer and along with other Asian countries like India and South Korea, is increasingly vital for the big oil producers around the Persian Gulf.

Any slowing of these economies will sap demand for oil, hitting prices and the revenues that OPEC governments depend on. The other factor would be if the cuts were to be implemented in the second quarter and demand starts to revive by that time, the OPEC+ alliance could just lose more market share to unconventional producers. 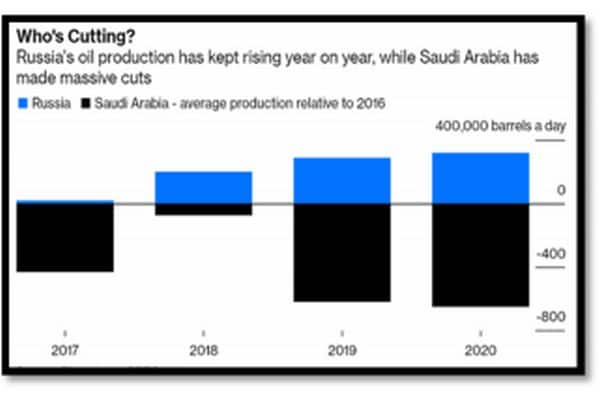 Libya blockage will automatically help OPEC as it has lost 1.0 Mbpd of production and its absence will be a gain. But it might not be easy for OPEC to come up with an effective response.

For one, it is difficult to predict how long coronavirus crisis will last and how much damage it will do to the world economy.

Also, possibility of deep cut would require producers to absorb serious pain. It is also difficult to judge when Libyan volumes, now down about one million barrels a day because of political infighting, will return.

Russia hasn’t said whether it will support a proposal by the coalition known as OPEC+ for deeper production cuts of 600,000 barrels a day. Russia’s Energy Minister Alexander Novak is “positively engaged” with Saudi Arabia and other suppliers, Prince Abdulaziz said.

Currently, reports suggest that Saudi Arabia is reportedly in talks with the UAE and Kuwait on a joint cut of about 300,000 bpd instead of the earlier proposed 600,000 bpd cut that Moscow kept rejecting. But a 300,000-bpd cut would only partially compensate for the lost demand as a result of the coronavirus epidemic.

Unable to count on Russia, the Gulf States may act on their own, although it’s not clear that the move will be sufficient. The tussle between OPEC and Russia raises substantial doubt about the continuation of production cuts and therefore a return to a heavily oversupplied market.

There can be a possibility of a total breakdown of the OPEC+ alliance, which can boost supplies by 2-3Mbpd in an already oversupplied market. In the past, Saudi Arabia has been adamant that all production cuts be shared pro rata between OPEC and Russian alliance members. Markets question is whether OPEC would continue to shoulder all the cuts on its own without pro rata participation from Russia. The market believes it won’t, and this fear is weighing in on the oil price. Russian Energy Minister Alexander Novak, meanwhile, remained resolute that OPEC+ should not bring forward its meet and find an urgent solution to the hundreds of thousands of barrels of oil demand it was losing a day in China.

Novak also described the coronavirus impact on oil as pretty uncertain and changing rapidly. If the If the alliance were to split, the immediate reaction would be a drop in oil prices, but that could be reversed by a strong OPEC cut.

OPEC seemed to be trying to prop up the market with talk of a meeting, but this tactic did not work. The OPEC/non-OPEC alliance's decision on the size of supply cuts for the second quarter and beyond will indicate whether producers are willing to risk short-term pain for a potential long-term market gain.

While Gulf Arab states have shown their backing for the cuts, Russia’s energy minister Alexander Novak remained sceptical of the impact of the virus in curbing oil demand growth and said the country needed more time to assess the full impact.

Energy markets can make a sustainable move higher, but a more aggressive OPEC+ response is going to be needed at the March meeting, and thus far Russia is seemingly reluctant to participate in further curtailments which is raising fears of an OPEC+ break-up.

Our analysis says that OPEC i.e. Saudis, Kuwait and UAE to cut even more to shore up the market in the face of the impact of the coronavirus impact on Chinese and global demand and cut more than 6, 00,000 bpd-1Mbbpd in markets and extend the agreement for another quarter, till March 2020.

This will push prices higher for short term but for long term perspective, we expect Money managers to add selling pressure to Brent in response to strengthening downside momentum. What is becoming clearer by the hour, is the disruption from coronavirus to business globally, in the form of supply chain bottlenecks and falling sales.

Against that backdrop, any short-term rallies in asset markets, are likely to be just that, short. Oil market has entered a vicious circle of selling pressure with no hope in sight.

The worst thing would be to call a meeting and keep a wait and watch situation for markets. Brent can see some recovery on hopes of OPEC and push prices to $55 but later on, the fundamental picture still looks negative with compliance from OPEC member still a major constraint for the markets and prices can touch $40 after the OPEC saga and Coronavirus fears which is turning into a global epidemic.