MCX Cotton has been making higher peaks and higher troughs on the daily chart which indicates strength in the prices of the commodity.

Cotton futures were trading firm at Rs 22,180 per bale on March 1 as participants trimmed their positions as seen from open interest. Prices had fallen 1.5 percent on Friday to settle at Rs 21,900/bale on the MCX.

The agri commodity traded in the positive territory after a gap-up start in the afternoon session tracking strong global cues.

“Domestic Cotton prices have been majorly avoiding steep rallies in the international market since the beginning of February, which helped domestic cotton shun steep weakness in ICE Cotton futures during the last week of February”, said Mohit Vyas, Analyst at Kotak Securities.

“Though correction in domestic cotton may not commensurate with ICE Cotton in coming sessions as well, we expect MCX Cotton futures to trade range-bound with negative bias in next few sessions”, he said.

MCX March Cotton traded at a discount of 20 percent from Cotlook A price of 98.90 cents as on Thursday.

The value of March and April’s contracts traded so far is Rs 52.29 crore and Rs 24.02 crore respectively.

MCX Cotton has been making higher peaks and higher troughs on the daily chart which indicates strength in the prices of the commodity. Going ahead, Rs 21,400 remains strong support and bias remains positive as long as it is trading above the support zone while intermediate support is placed in the range of Rs 21,700-21,750 levels, said Motilal Oswal. 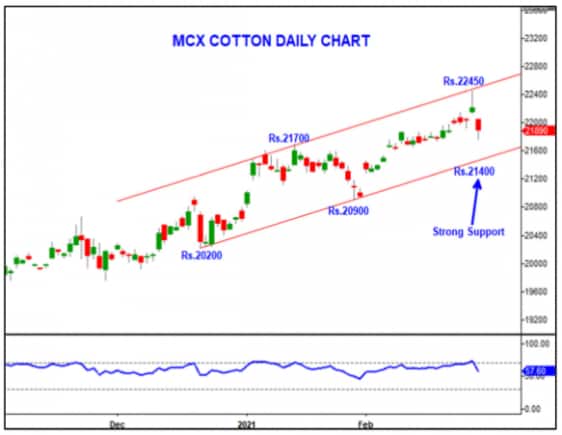 The brokerage firm said on the higher side cotton is likely to test Rs 22,450-22,800 levels. The Relative Strength Index (RSI) has been sustaining well above the midpoint of 50 level which indicates strength in the prices of the commodity. It advised buying on dips.