Coronavirus is turning out to be one of the biggest epidemic which poses great threat to global economies. Coronavirus does pose a negative impact on social activities and the economy, the reason why commodities like oil and copper have taken a big hit.

Gold prices have been on the rise ever since US President Trump decided to impose tariffs on China back in 2018. At the start of this year trade war related uncertainties started to fade-off and most market participants were expecting gains in gold to be capped. But with trade war uncertainty triggers and now the outbreak of Coronavirus is helping the safe-haven asset to outperform most global asset classes.

Coronavirus is turning out to be one of the biggest epidemic which poses great threat to global economies. Coronavirus does pose a negative impact on social activities and the economy, the reason why commodities like oil and copper have taken a big hit.

Many people have compared the outbreak of coronavirus to SARs outbreak in an attempt to foresee how the financial market will develop. While it is very difficult to pinpoint the exact timeline for any virus outbreak we have used November 2002 –July 2003 (SARs) and YTD 2020 (Coronavirus) to examine the financial returns of gold in such an environment.

The difference between then (SARs) and now is that the base level is very different. In 2002-2003 gold was quoting at around $300+ and currently it is trading above $1,500. The difference in the base price definitely affects the return in percentage terms. 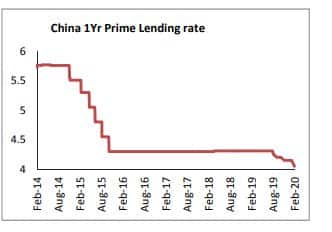 In the last couple of sessions we have witnessed a sharp rally in gold prices as until now there is no breakthrough of an antidote for the virus and at the same time stimulus announcements by the PBoC is suggesting that outbreak of virus could derail the pace of Chinese economy.

The PBoC announced to lower one-year loan prime rate (LPR) by 10 basis points to 4.05% from 4.15% at the previous monthly fixing. The LPR cut followed a similar move in the central bank’s medium-term lending rate announced earlier this week as policymakers sought to ease the drag to businesses from the coronavirus outbreak.

Even if the conditions start to improve the transition will not be smooth enough, the effects on China and the overall economy will be far worse than the expectations.

SARs is a past event whereas COVID-19 coronavirus has just started but if the outbreak continues to escalate, impact of the same could be much more worse than what it was during SARs. In the current scenario investors have certain questions which need an answer:-

1) What are the factors impacting the gold prices?

Numbers of cases are increasing by the day igniting panic mode in the market, hence increasing the bets for safe haven assets. In just a matter of few days death toll rose significantly claiming more than 2,600 lives and the number of people affected have crossed the 75,000 number. Including few Asian countries, the coronavirus cases were also reported in US, UK, Australia, Singapore and many others, this sudden rise in death toll globally have increased worry in market. 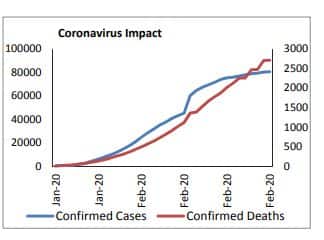 Market participants are optimistic regarding the antidote of coronavirus being found although according to certain reports from WHO any antidote might take at least 2-3 months of testing time before it can be circulated in public hence making a strong case for a gold rally.

2) What if the virus is cured?

Many places are in complete lockdown as the outbreak concerns have ignited fear in the market. In reality we are still not near the early stages of the coronavirus saga as antidote is still on trial and not yet being successfully tested nor commercially produced.

While SARs lasted for at least eight months, coronavirus could be around even longer considering that it’s even more contagious. Even though, if any cure is found, the spillover effect of the same will give a jerk to the market.

To restart a smooth supply-demand process which was at a halt for so many days will be a task, other than that to overcome from the losses that china incurred during the Lunar New Year will take some time. Hence, if the cure is found gold might give a jerk initially due to the risk off sentiment but can be back on track once the panic in the economic number is realized.

During previous instances we have witnessed that gold shoots up in anticipation of any uncertainty and then gives out all its gains in the name of profit booking or panic selling although this is just a breather for the next big rally. The same thing is happening currently, gold which was at its highs in the previous month saw a bit of a profit booking at the start of this month and then is moving in a range waiting for trigger. The after effects of this outbreak will be a tough one on China and elsewhere too.

3) Why are we still positive on gold?

Apart from uncertainties caused by the coronavirus the macro front is also very positive for gold. Central banks in the past have cut interest rate and also maintained a stable outlook on the economy; this year with the outbreak of Coronavirus major central banks are expected to maintain a status quo approach or could even consider cutting rates to stimulate the economy. This move will be one of the key supporting factors for the precious metal pack. There is speculation of an inverted yield curve immerging in the US government bonds once again. This indicates that the market has started to worry that the US will enter an economic recession in the near future. Severe debt levels are also a matter of worry for the market.

Apart from all this, trade talks which has been sidelined due to the virus outbreak might reappear in the picture. Hence, there are multiple pain points in the market whenever triggered will bring in a shock to market supporting the precious metal pack.

While the comparison to SARS may provide some guidance, important changes have been experienced in China and the Chinese gold market since the 2003 outbreak. The current outlook will depend on how the situation plays out. China’s GDP was only 4% of global GDP in 2003; while in 2019, China’s market share has already jumped ~16%. Market participants are already anticipating the country’s Q1 GDP growth down by 1-2% and may even have a lasting effect into Q2(assuming the situation gets under control by Q2) which will have a spillover effect on global economies as well.

Just to get a brief perspective, China is a major producer and consumer for many products, hence if there is any such issue in China whole world will be affected. Transport is at halt, luxury products usage is at the lowest, companies like Apple have shut stores in certain regions; overall manufacturing processes have slowed down drastically. Hence in such a scenario if this situation aggravates it will worsen the situation and if it gets better the after effects will be severe on the market slowing the overall process.

Any updates will influence the overall sentiment for gold, until and unless there is no official cure announced and significant recovery is seen, market sentiment will remain on buy side for metals prices.