Coffee Day Enterprises (CDEL), the company founded by late coffee tycoon VG Siddhartha, has put its Sical Logistics unit on the block as it seeks to pare debt, three people directly aware of the matter said.

CDEL has hired ICICI Securities as adviser for the potential transaction, which could see the group holding company raise Rs 1,000-1,500 crore, the people cited above said on condition of anonymity.

“CDEL is planning to sell the entire promoter stake and assets of Sical Logistics,” said one of the three people cited above. ICICI Securities was appointed last week to find a buyer for Sical Logistics, the person added.

“CDEL’s debt at the consolidated level is around Rs 4,400 crore. The sale of the Global Village Tech Park will bring down this debt to around Rs 2,000 crore, while a part of the proceeds from this sale will go to CDEL’s books towards working capital requirements,” the person said. 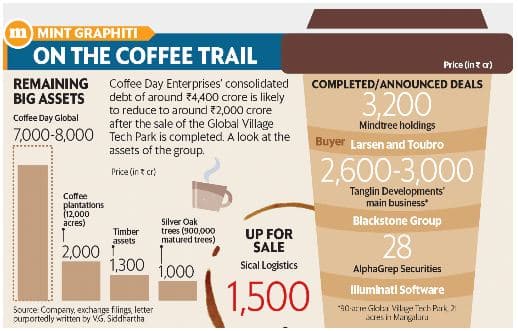 On September 7, CDEL hired IDFC Securities to advice on strategic options including the sale of its holding in Coffee Day Global, the unit that owns India’s largest coffee chain, as well as to advice on refinancing of the group’s debt.

On September 5, Mint reported that the promoters and lenders of CDEL have shelved a plan to sell a controlling stake in Coffee Day Global after holding initial talks with potential suitors, including Coca-Cola and ITC. The promoter family may revisit the sale of the coffee business at a later date, the report said.

Mint reported on July 30 that Siddhartha was in talks to urgently refinance a large portion of his and his company’s outstanding debt. Tanglin Developments, a real estate subsidiary of CDEL, is closing its sale of the 90-acre Tech Park to New York-based buyout firm Blackstone Group for Rs 2,800 crore. Alongside, CDEL is exploring other options to reduce the group’s debt after Siddhartha’s suspected suicide.

CDEL’s promoter stake has fallen substantially since July 26. According to a series of filings by the company on exchanges, pledges on 26.47 percent of CDEL shares (pledged with debenture holders) have been invoked by debenture holders between July 26 and August 30, leaving the promoter group of CDEL with only 27.46 percent in the company.
Mint
TAGS: #Business #Coffee Day Enterprises #Sical Logistics #stocks #VG Siddhartha
first published: Sep 9, 2019 09:16 am