The recommendations, when approved by the finance minister, may offer some respite to struggling infrastructure companies that had been requesting for easier payments terms in the face of the economic slowdown and high interest rates.

The C Rangarajan committee that was appointed to decide on rescheduling premiums for road projects has submitted its recommendations to the roads ministry, reports CNBC-TV18's Rituparana  Bhuyan.

The recommendations, when approved by the finance minister, may offer some respite to struggling infrastructure companies that had been requesting for easier payments terms in the face of the economic slowdown and high interest rates.

Premiums are the amount road developers pay to the National Highways Authority of India, in lieu of being awarded the project and given the right to levy tolls.

The recommendations of the Rangarajan panel, however, are different from those suggested by the NHAI. 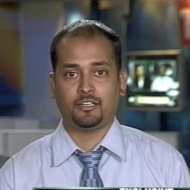 While NHAI had said premiums to the tune of 75 percent should be restructured for the first three years of a project, along with a restructuring of 50 percent from the fourth onward, the Rangarajan panel has said the a loan should be offered through the revenue shortfall mechanism if if annual toll collections cannot cover debt servicing, operations and maintenance-related costs.

Loans at an interest rate of bank rate plus 2 percentage points can be offered to meet up the revenue shortfall for stressed highway projects, the panel has said.