In the state of Telangana, out of 450 mandals, 231 have been declared drought-hit. However, on ground, the picture may be worse according to various farmers associations.

Reeling under acute drought conditions, a state mostly dependent on rain water is now facing an extreme water shortage. As a result, production of food grains and pulses has fallen drastically. CNBC-TV18's Deepthi Bathini and Arundathi Ramanan bring us a ground report from Jangaon in Telangana.

In the state of Telangana, out of 450 mandals, 231 have been declared drought-hit. However, on ground, the picture may be worse according to various farmers associations.

A state synonymous as 'annapurna'- rice bowl of India is now seeing the production of paddy falling drastically. For instance, B. Narasimha has two acres of farm land in Kalem village in Jangaon, dedicated to paddy cultivation. However, this year with water levels dropping and borewells drying up, Narasimha could sow paddy only on half acre. He says this is the same story across his village

Narasimha says, "I had two acres in which I used to sow paddy every year. This year with water scarcity, I have sown only half an acre hoping that will feed my family. It is the same situation everywhere." 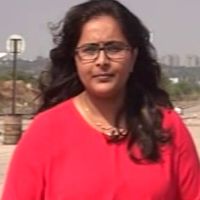 What is also alarming is the rate at which rice mills are shutting down in Telangana. The state had 2500 rice mills and 1000 of them have shut down in just the last two months. These mills are primary suppliers to government for rice under public distribution systems (PDS).

The state requires 18 lakh tonne of rice and mills could supply only 9 lakh tonnes. With shortage of paddy production and increasing costs to maintain the mills, owners feel they are better off shutting the mills down.

Speaking to CNBC-TV18, President of the Rice Millers Association, P. Balaiah says, the industry which invests a minimum of Rs 10 crore to set up a mill is now facing an uncertain future, adding, atleast 75,000 people are directly or indirectly employed through these rice mills.

"There is shortage of paddy and drought isn't helping us either," Balaiah says.

The state had sought Rs 3,064 crore from central government for drought relief but the Centre has only agreed to Rs 791 crore. Farmer’s organisations are concerned that this would have an impact on the next crop as well.

While the drought conditions in the state are alarming, the concern on hand is the falling production of food grains, especially paddy. Being water intensive crop, the government machinery needs to pull its act together to at least save the next crop.

Govt reaches out to IT majors for COVID-19 management assistance