172@29@17@144!~!172@29@0@53!~!|news|business|cnbc-tv18-comments|demonetisation-mumbai-builderssafe-zone-dismiss-fallprices-929821.html!~!news|moneycontrol|com!~!|controller|infinite_scroll_article.php!~!is_mobile=false
Uncover the potential of active and passive investing on 6th October at 4pm. Register Now!
you are here: HomeNewsBusinessCNBC-TV18 Comments

It is estimated that real estate transactions account for one third of all black money transactions in India - so when Prime Minister Modi made the demonetisation announcement, it was assumed that land property prices would fall. However, real estate experts and developers believe this will not be the case, at least in Mumbai.

The real estate sector too is likely to face long lasting implications from the demonetisation drive and CNBC-TV18's Kevin Lee tries to assess the impact.

It is estimated that real estate transactions account for one third of all black money transactions in India - so when Prime Minister Modi made the demonetisation announcement, it was assumed that land property prices would fall. However, real estate experts and developers believe this will not be the case, at least in Mumbai.

According to Abhishek Lodha, MD of Lodha Developers, "There are markets like Mumbai & Bangalore where there is hardly any cash involvement in sales, and these markets are unlikely to be affected in any major manner."

A lot of these black money transactions or cash transactions happen in the secondary market that is when you buy a house from somebody else as opposed to from the developer directly, he says. 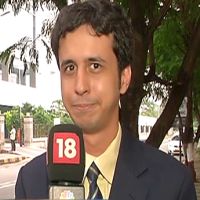 Rohit Poddar, MD of Poddar Developers believes, "Investors who don't pay stamp duty, or are looking to flip their apartments and possibly, in the past, would not like to pay capital gains tax on their income, and therefore, the surplus money which they've made, they would realise by selling a part of this in cash - this has come down radically in the last 2 years but we've still heard of instances, I think that will come at a standstill."

Another trend that is likely to prevent a big price fall in the primary market is consolidation. 75 percent of the sales volume in Mumbai is generated by listed companies or big private brands rather than local developers, and these players are still confident that they will be able to sell houses without reducing prices.

Lodha notes, "Since demonetisation, it's been 6 days and we've (the company has) done Rs 100 crore worth of sales. Definitely, buyers are asking questions but the fact is if we've done Rs 100 crore of sales, you can imagine that people when they're buying good product, well priced and high quality, they are willing to make the decision."

All in all, those looking to buy their dream home directly from big developers may not see much change in  transaction values but developers and market watchers are adopting a wait-and-watch stance when it comes to prices in the secondary market.