Sudarshan Sukhani of s2analytics.com is of the view that one can buy Cadila Healthcare, Ashok Leyland and Hindustan Zinc and can sell Equitas Holdings and ITC.

Sudarshan Sukhani of s2analytics.com told CNBC-TV18, "I am buying Cadila Healthcare, pharma stocks have all bottomed out and giving very attractive buying patterns. So, if at all we need to focus on a sector that should be pharma for buying. You could really close your eyes and buy something now, something good and it will make money in the next six months."

"Cadila is just finishing a bullish head and shoulder. It is a swing trade of course, but it is also a positional buy. Buy it, hold it for a few weeks and there is money in it."

"Ashok Leyland has been seeing a consistent rally, a small dip in Ashok Leyland is a buy on minor dip opportunity. I would be a buyer there."

"Hindustan Zinc is part of the metals pack which keeps on going up. There is a big story also supporting it. It is in a consolidation, I would expect that consolidation to break on the upside," he said.

"I have to short sells, one is Equitas Holdings part of the NBFCs group which at least till now I am not very keen on in the short term and that is a short sell." 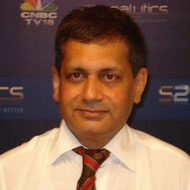 "The second is ITC, if you see ITC’s chart it is at the lows. So, something is going wrong there and there is a short sell. Generally, short sell should be done either intraday or exit at next day at the most,"  he added.

"NMDC which has the rally in the offing for other reasons too and Gujarat State Petronet which is the PSU from Gujarat is probably ripe for the big rally again."

"Biocon is a buying opportunity. NHPC has a bad day yesterday, but it is on the verge of an upside breakout, so we are buying in anticipation of that breakout."
TAGS: #Stocks Views
first published: Nov 7, 2017 09:44 am