Budget 2023: When Finance Minister Nirmala Sitharaman presents this year’s budget on February 1, she faces the daunting task of balancing a commitment to narrowing the fiscal deficit with keeping the engines of growth well-oiled.

Pedestrians with buildings in the background in the Mahalaxmi area of Mumbai, India, on Tuesday, Jan. 26, 2021. Mumbai is among the most densely populated cities in the world. Photographer: Dhiraj Singh/Bloomberg

India’s pace of spending on infrastructure, buildings and other fixed assets will probably slow in the coming fiscal year, a development that could dent the nation’s ability to maintain world-beating growth.

To sell itself as an attractive destination for foreign capital, Asia’s third-largest economy has leaned on robust capital spending, increasing its infrastructure budget 39% and 26% in the last two years. But as recessionary woes spread globally, India’s tax collections and asset sales are likely to fall, analysts say.

When Finance Minister Nirmala Sitharaman presents this year’s budget on February 1, she faces the daunting task of balancing a commitment to narrowing the fiscal deficit with keeping the engines of growth well-oiled. India’s ambition to become the world’s factory hinges on enhancing infrastructure and smoothing out logistics — areas that still need plenty of government funding.

Government agencies also face the challenge of managing capacity limits, according to Rupa Rege Nitsure, an economist at L&T Finance Ltd. “The statistical base is very high and to spend above it year after year is not feasible within the given resource constraints,” she said. A likely slowdown in government revenue will further impact spending. For fiscal year 2024, which starts on April 1, growth in tax collections may moderate from the 30% pace seen in 2021 and 2022, economists from HSBC Holdings Plc. said.

India’s nominal gross domestic product growth, which isn’t adjusted for inflation, may decelerate to 10% or lower in the coming fiscal year from an estimated 15.4% in the current financial year. “Such a slow growth rate would have serious implications for the macro-economy and financial markets,” Motilal Oswal Investment Services wrote in a report to clients earlier this month.

In the past few years, tax collection outpaced nominal growth as the government tightened compliance rules. The benefits of those measures may have already peaked. At the same time, asset sales are floundering and aren’t expected to rebound a year before India’s national elections, which are slated for 2024. 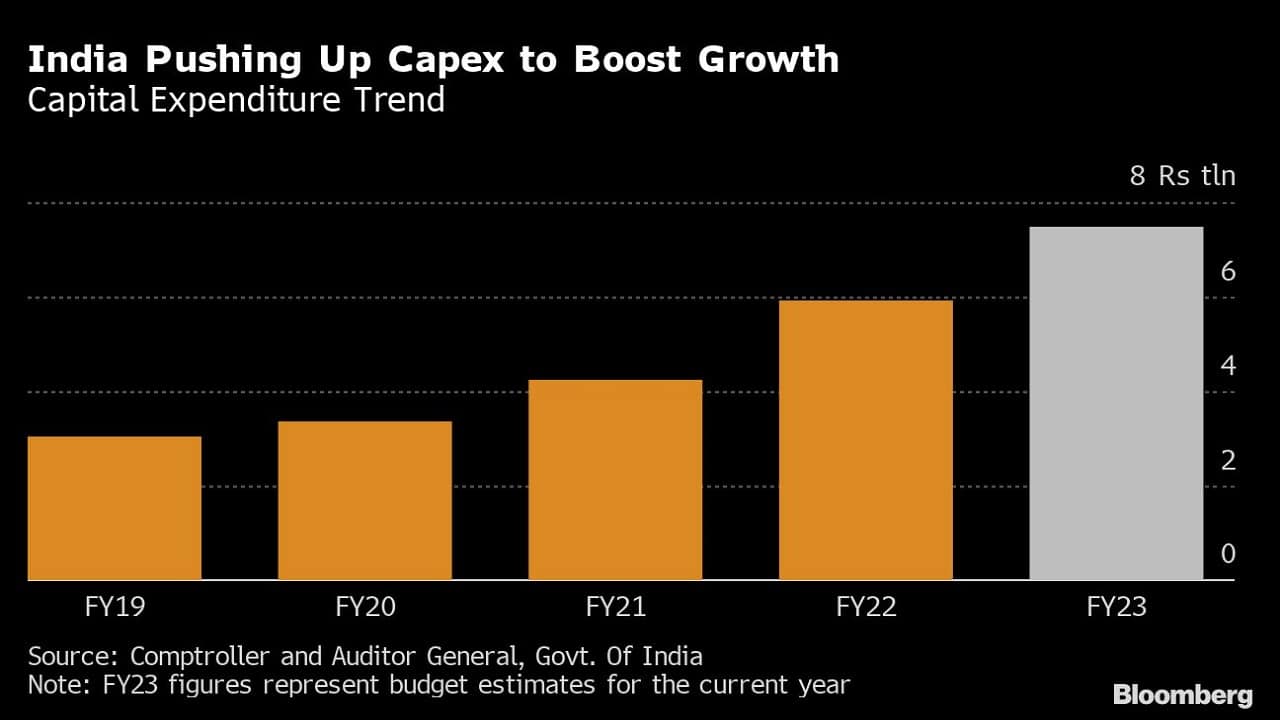 India targeted 650 billion rupees ($7.9 billion) in privatization revenue this financial year, but so far they have raised just about half of that amount.

Madhavi Arora, an economist at Emkay Global Financial Services, warned of a situation where government spending and private investment will both slow in India.

In such a scenario, the “domestic growth story will lack the next lever of secular growth amid missing capex turnaround,” she said.