The need to boost agriculture is understandable. After all, this is the sector that has been languishing for long.

The two sectors that the Budget appears to have benefited the most are agriculture and healthcare.

The need to boost agriculture is understandable.  After all, this is the sector that has been languishing for long.  Even though almost 50% of India’s population works in this and allied sectors, its contribution to the country’s GDP is barely more than 14%.  Even if one considers its Gross Value Added (GVA), the growth of this sector falls far below both industry and services (see chart). 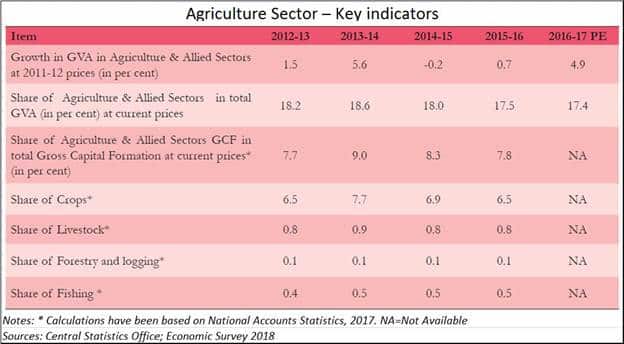 There is a second reason why this sector is crucially important.  It accounts for 50% of the votes.  And it is easier to win over the loyalty of rural folk than it is with urban folk. Hence, it was a given that the present government would do everything it could to ensure that it could win back the loyalty of the rural vote.  It is economically sensible.  It is politically compelling as well. After all, assembly elections are due in eight states later this year—Madhya Pradesh, Chhattisgarh, Rajasthan, Karnataka, Nagaland, Tripura, Meghalaya and Mizoram. Four other states are going to polls in the first half of 2019.  Many of these states have major agricultural constituencies.

There is another politically compelling reason for this government.  It decision to allow the cattle slaughter ban and then even ban the transportation of all old cattle including buffaloes seared the incomes of cattle owners.  Livestock is crucial to rural folk – especially milk producing cows and buffaloes (see chart).  Over the decades, squeamishness over the slaughter of cows has caused many Hindu families move to the rearing of buffaloes instead. Animal husbandry census figures show that wherever the cow slaughter ban was rigidly enforced, the population of cows declined (http://www.asiaconverge.com/2017/03/cow-belt-makes-cows-an-endangered-species/). Thus when the ban on the movement of old cows as well as buffaloes was announced, it hurt both Hindus and Muslims. And since the biggest constituents of the cattle slaughter and leather industries are Dalits and Muslims, there are dangers that the ruling party may lose their votes.  Hence the need to woo agriculture is crucial today.

All things said and done, there is no denying that the budget provisions for agriculture could help both India’s economy as well as the party in power. The finance minister outlined a slew of measures to boost agricultural production and the rural economy. He announced new projects as well as enhanced support for existing schemes. The cumulative outlay for all of them comes to around Rs.14.34 lakh crore.

“The focus of the government next year will be to provide maximum livelihood opportunities in rural areas by spending more on livelihood, agricultural and allied activities and construction of rural infrastructure . . . . .In the year 2018-19, for the creation of livelihood and infrastructure in rural areas, the total amount to be spent by ministries will be Rs14.34 lakh crore from extra-budgetary and non-budgetary resources.”

The meek can be mighty

The finance minister knows that 86% farmers in India are small and small and marginal cultivators.  And they are the worst affected by input costs.  As the adjoining chart shows, the small farmer is more hurt by input costs, because he lacks the economies of scale, and therefore needs handholding and price support. He is also vulnerable to the discriminatory practices reportedly followed by the Food Corporation of India (FCI) and state trading corporations. These entitites purchase grain at procurement prices from large and influential farmers and often ignore small and marginal farmers.  The latter are then compelled to sell their produce at distress prices. 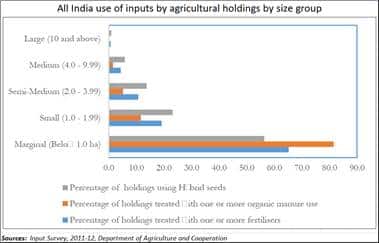 One of the first steps Jaitley announced was setting the minimum support price at 1.5 times the cost of production of the kharif (summer) crops. Rabi crops have been ignored for the present, though rice and wheat are grown during the rabi season as well. According to him, the Niti Aayog – in consultation with state governments -- will put in place a mechanism to ensure farmers get adequate remuneration should crop prices fall.

In addition to this, the finance minister also announced an increase in agricultural credit to Rs11 lakh crore.

Among the other measures announced by the finance minister were development and upgradation of 22,000 rural haats or markets for which he has set aside Rs2,000 crore. Another scheme announced was “Operation Green” , with a provision of Rs500 crore, for promoting agriculture logistics. His government would, he said, make efforts to link villages and rural roads to agriculture markets, secondary schools and hospitals under the Pradhan Mantri Gram Sadak Yojna (PMGSY).

The government also announced an increase (from Rs.4,500 crore to Rs.5,750 crore)  in funds allocated for the National Rural Livelihood Mission”. Given the savage mauling this sector has received because of the slaughter and beef transportation ban in many states, it is not known how this fund will be utilised.

The government has also allocated Rs2,600 crore to ensure irrigation facilities in 96 irrigation deprived districts, and funds for promoting fisheries and animal husbandry.

The government’s schemes sound great, especially the one which seeks to guarantee farmers a return of 1.5 times the cost of cultivation. But that can be achieved only if two things are done.

First, it must create more warehouses.  Already, all the warehouses of the government (including those owned by the state trading corporations and the private sector) are full to the brim (http://www.asiaconverge.com/2017/08/is-wdra-a-functioning-organisation/). This has caused procurement of grain by the Food Corporation of India and the STCs to be far in excess of the storage capacity.  What happens then is simple.  The grain is allowed to stay outdoors and rots.  Even the Supreme Court had come down heavily on the government for allowing the grains to rot, asking it to give the grain to the poor instead free of cost.  That is something the government has not done, reinforcing fears that the government was party to letting the grain rot because it wanted evidence of first-rate prices being paid for second-rate produce to disappear.

The Budget has not provided incentives for such warehouses, though the finance minister dis speak of dematerialised receipts and warehouses.

Moreover warehouses can work only if there are good assayers and periodic (at least every month) audit of these warehouses to ensure that the quality and quantity matched those for which receipts were given. If that is not done, it could lead to another NSEL type scam.

Without proper warehouses – that are easily accessible to small farmers – and commodity exchanges which allow for price discovery, and a guarantee that the government will step in and purchase the crop at the minimum statutory price (MSP), the government’s plans will not work.  The government can then sell the crop it has purchased in global commodity markets at losses, but the farmer remains protected.  Those are skills and structures that the government has not built, and has shown itself ill-equipped to develop.

In fact, it may be pointed out that the government had introduced the Warehousing Development Regulations Act (WDRA) which has been languishing since 2012 (http://www.asiaconverge.com/2010/12/warehousing-act-farm-game-changer/.

There is also the urgent need to take procurement away from the FCI and the STC and hand over procurement to independent agencies – possibly the warehousing companies attached to the existing commodity exchanges.  But the government does not appear to have the stomach to do this.

Secondly, there is a need to move quickly away from procurement of rice and wheat to procuring other grain as well that form the basket of kharif crops. That will again mean more warehousing, and more legislation to trim the wings of FCI and the STCs.

Thus, while the budgetary provisions are excellent, and promise a lot, there is a great deal of scepticism about such provisions actually being implemented.  One only hopes they will, because the vibrant farm sector means a huge benefit for the entire economy.