Birla Cable: Too dependent on a few customers and future of 5G

The company has a market cap of Rs 630 crore and has slowly been inching up.

2018 has been a disastrous year for small cap stocks. The Nifty Small Cap Index itself has fallen more than 40 percent from the peak it saw in January of this year while a lot of stocks which can be categorized as small cap have fallen even more.

One stock though seems immune to the happenings around it. Birla Cable has witnessed its stock rise 230 percent in 2018. But this has not come from PE expansion for even after such a stupendous rise, the Trailing 4 Quarter Price to Earning ratio lies at 15.91. So, what has changed for the company and is this change permanent? Lets dig in.

Birla Cable is the new name for a  very old company – Birla Ericsson Optical  – a company that has been listed on the bourses since 1995. Birla Ericson Optical was part of the MP Birla group – the same group that was pushed to turmoil when Priyamvada Birla passed away and bequeathed all the wealth to Lodha, Auditor of her companies.

The company has a market cap of 630 crore. and has slowly been inching up.

Currently, Harsh Vardhan Lodha is the Chairman of the company and has been leading the group post the death of his father Rajendra Singh Lodha. Another company that has been seeing new highs in recent times and also under the same management is Universal Cables Ltd. Universal is a manufacturer of Power Cables while Birla Cable is a company in the field of optical fibre cables, copper telecommunication cables, structured copper cables and specialty wires and cables.

The change in management in itself didn’t change anything when it came to the financials. The company tottered along with total loss of around 12 crores from 2007 to 2012. 2013 changed all that thanks to a massive order from Bharat Broadband Network Limited (BBNL). BBNL was a special purpose vehicle promoted by public sector companies like BSNL, PGCIL and RailTel under USO funding mechanism to connect 2.5 lakh villages.

Unfortunately the next three years – 2014 to 2016 saw a slump owing to no major orders from BBNL showcasing how dependent the company was on a single client. The arrival of Reliance Jio and investments by other private telecom players meant that the company was able to remain profitable.

In the last financial year, the trend turned once again to green thanks to the launch of Bharat Net which is nothing but a re-launch of BBNL in a new avatar. As of December 2017, 43 percent of the villages to be covered have been covered. Once this is complete, the Phase Three, time-frame for which is 2019 to 2023 should commence.

Another big trigger is the push to 5G and the investments that will come along for it. And then, if it ever materializes, the concepts of smart cities.

The positive about the company is the lack of dilution in equity or addition of debt. The company has a debt of 45 crore with interest coverage of 16 times. While the company grew substantially in the year ending March 2018, the long working capital days (97 days) has meant a negative cash flow for the year despite booking record profits.

In our Funda Series, we had written about a concept called Self Sustainable Growth Rate. The self sustainable growth rate for the company based on last three years suggests that the company may face headwinds in its ability to grow without either diluting equity or adding to Debt. The company retains about 80 percent of earnings, and has seen about a 15 percent ROE last year, which would mean the Self Sustainable Growth Rate is around 12 percent a year – but it’s growing revenues at more than 70 percent last year.

This means either the margins need to go up substantially (currently low double digits) or they need to increase capital turnover, or raise equity or debt. For a company with a 90+ day receivable cycle, this kind of growth will require debt/working capital.

Debt to Equity Ratio has hovered between 0.40 to 0.70 over the years and currently stands at 0.40. This along with the growth in earnings allows the company to add to debt without a great amount of risk but given its dependency on big orders to come through, any issues there may come to haunt it in the future.

Average Return on Equity at 8 percent over the last 9 years leaves much to be desired. Return on Capital Employed comes even lower at 7 percent. But if you take just the last one year, it’s gone back up to about 15 percent on ROE and ROCE.

Overall, while the company’s showing some scorching price growth in the market, the financials don’t have enough strength for an outsized bet. However, small caps are the kind where you need a leap of faith and trust in management to grab at an opportunity and grow, and with Birla Cable, one might need a more detailed look at management capability and shareholding.

One of the promoters is Vindhya Telelinks (another listed company) which has 20 percent in it. Birla Cable itself owns a few shares of Vindhya Telelinks. Another promoter is Universal Cables, a power cable company, which is also listed and Vindhya Telelinks owns 23 percent of that also. SO it’s a bit of a mess, and one thing you can say is: It’s going to be difficult to acquire this company (so don’t bet on a sale).

Overall, the company is small, and has only started to sniff at revenue. It’s too dependent on a few customers and perhaps on the future of 5G. However, price action is sometimes indicative of what isn’t yet in the public domain, and a great input for momentum investing – so that’s one way to benefit from what no one seems to know. 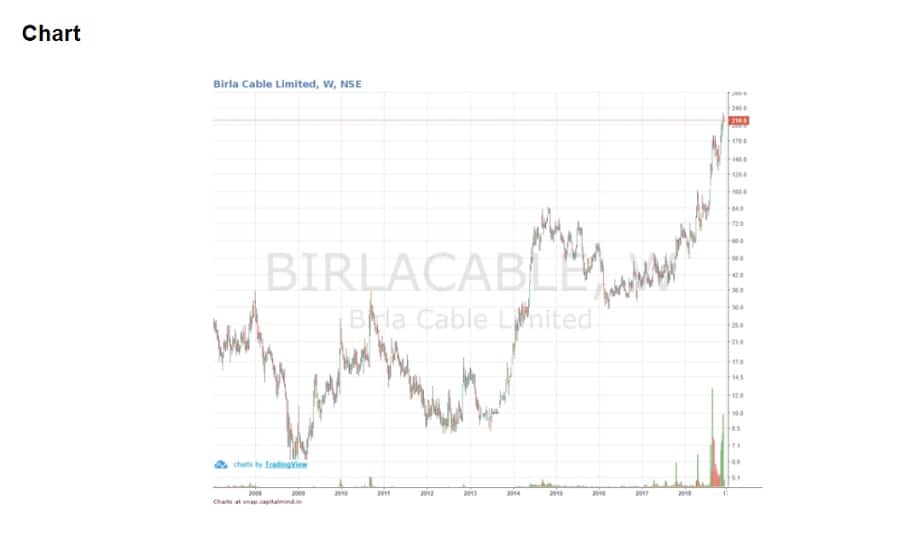