How Indostar Capital’s share prices went into a free fall

On August 5, Indostar Capital reported its highest ever quarterly net loss for the quarter ended March at Rs 767.2 crore.

Indostar Capital Finance has not followed the steps for restructuring loans, as per an audit.

Shares of Indostar Capital Finance are down over 30 percent from nearly Rs 210 apiece on May 5, before the non-banking finance company (NBFC) informed exchanges that an external auditor had found lapses in its loan book.

Troubles for Indostar Capital started on May 6, when it first informed exchanges that it may be required to make additional expected credit loss (ECL) provisions of Rs 557-677 crore due to “certain observations and control deficiencies” noted by an external auditor in its commercial vehicle (CV) loan portfolio.

As per the investigation, the NBFC had deviated from the credit policy for loan approval for loans to certain existing customers, while also granting some waivers for foreclosure of loans.

The NBFC did not follow detailed steps for restructuring loans, as per the audit. It said that a review will be undertaken to ascertain the root cause of deviations from policies, and to plug gaps in internal financial controls and systems. 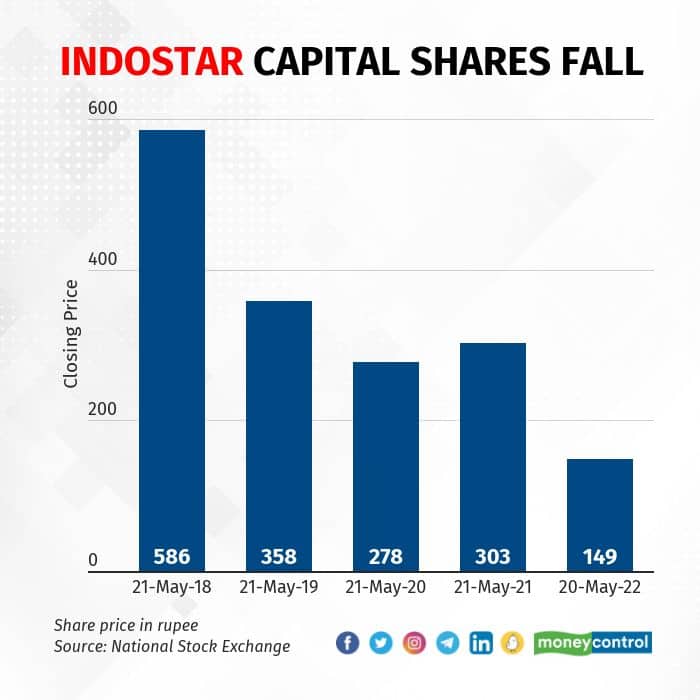 The review caused the NBFC to defer its Q4FY22 results. On August 5, Indostar reported its highest-ever quarterly net loss for the quarter ended March — Rs 767.2 crore.

The higher loss was on account of sharp deterioration of asset quality parameters.

Indostar’s gross non-performing asset (GNPA) ratio rose to 15.5 percent as on March 31, from 4.5 percent on December 31, 2021, as it recognised stress in its loan portfolio.

Accordingly, net NPAs rose to 8.3 percent as on March 31, sharply higher than 2.3 percent a quarter ago.

In view of the higher NPAs, Indostar made provisions to the tune of Rs 550 crore for the January-March quarter, and wrote off loans amounting to Rs 487 crore during the same period.

“The NBFC had no option but to create higher provisions and write-offs, and the trajectory of these two figures remains crucial,” a senior analyst with a rating agency said, requesting anonymity.

The analyst quoted above said that going ahead, write-offs will likely remain lower in absence of other substantial developments. Further, the NBFC chose to conduct higher write-offs in Q1FY23 and Q4FY22 for headline asset quality figures to be complaint with bank borrowing arrangements, he said.

NBFCs usually have a diversified borrowing profile, however, their borrowings are majorly dominated by banks. In Indostar’s case, bank loans accounted for 36 percent of its overall borrowing of Rs 5,869 crore as on June end.

“With lower NPAs, some borrowing covenants may be met. The NBFC will have to put up a good show in Q2 for lenders to gain confidence,” the analyst said.

In the notes to accounts adjoining the financial result of the NBFC’s Q1 results, Deep Jaggi, CEO, Indostar Capital said that the NBFC had already exceeded the threshold specified for NPAs on certain borrowing arrangements.

Additionally, certain borrowing arrangements have overriding clauses to terminate, reduce, suspend, or cancel the loan facility in future, at the absolute discretion of the lender, as per the notes to account.

Jaggi said that nonetheless, since June end, the NBFC had been able to raise incremental funds amounting to Rs 380 crore from banks and financial institutions “on the basis of strong global banking relationships of the promoters of the company.”

“However, there can be no assurance of success of management's plans to access additional sources of finance to the extent required, on terms acceptable to the company, and to raise these amounts in a timely manner. This represents a material uncertainty that may cast significant doubt on the company's ability to continue as a going concern,” he added.

In order to raise further capital, the NBFC may also plan to raise additional financing through monetisation of a portion of its holding in its 100 percent subsidiary lndoStar Home Finance, Jaggi said.

On August 14, the board of Indostar Capital had approved raising up to Rs 3,000 crore via non-convertible debentures (NCDs), on a private placement basis, in the next one year. Analysts said that the announcement of a successful fundraise may lead to a boost in the NBFC’s stock price.

“Negative developments around the NBFC will likely lead to a difficulty in funding. Without funding the growth parameters look weak,” the analyst quoted above said.

Per rating agency Crisil, a reduction in stake by promoter Brookfield below 51 percent will likely be a downward trigger for the NBFC’s ratings. Additionally, delay in raising funds other than through the securitisation route is impacting growth. Further deterioration in capital adequacy levels, along with continued stress in asset quality and profitability will also be drivers for a downward rating, Crisil said.

Analysts say that a key task for the NBFC’s management will be to reduce promoter stake from 89.21 percent. As per norms, companies are required to maintain a minimum public shareholding of 25 percent within 36 months of listing on the stock exchanges. IndoStar Capital listed in May 2018.

At a time when the NBFC needs capital for growth, it needs to be seen how it meets this challenge.