Upcoming Event:Join us for the exciting discussion with Danone on role of nutrition, protein in working professionals’ quality of life on July 31, 3pm.
you are here: HomeNewsBusiness

Former World bank chief economist Kaushik Basu calls it stagflation, others don't agree. But there is a consensus among majority that if inflation threats persists, the MPC may have to take a relook at the accommodative stance

Will the upswing in inflation number force a change in the monetary policy committee (MPC)'s approach on the so-called accommodative stance? So far, the rate-setting panel has consistently maintained that revival of economic growth is its immediate concern and the inflation numbers will be looked through in the near term to support growth recovery.

Top economists, Moneycontrol spoke to, interpret the likely impact of high inflation on MPC's stance in different ways. A section of them said if core inflation persists, the MPC may have to get back to tight inflation control while others say till the time growth decline is arrested, there won't be any change in the stance. One top economist even called the current inflation-growth scenario a state of stagnation; others don't agree.

Stagnation refers to a period of high inflation, high unemployment and low growth.

Inflation is showing upside swings. The May consumer price index (CPI)-based retail inflation number has come at a six-month high at 6.3 per cent. That is compared with a 4.23 per cent in April. The MPC has the mandate to keep inflation in the 2 percent-6 percent band.  But, more worrying is the core inflation number, which is the non-food, non-fuel part of the inflation. This component rose to an 83-month high 6.6 percent in May 2021, and is expected to remain above five percent throughout the fiscal year.

The MPC has shifted to state-based forward guidance from time-based guidance in April but at the same time has maintained that it will do everything possible to support growth recovery as long as necessary.

"In the coming months, domestic inflation trends are likely to raise anxiety levels in the RBI and the MPC," said Soumya Kanti Ghosh, Group Chief Economic Adviser, State Bank of India in a recent note.

In the June policy, the RBI projected the CPI inflation at 5.1 per cent during 2021-22. But the general consensus among economists is that inflation may average above that level in FY 22. India's largest rating agency, CRISIL has forecast 5.3 per cent inflation in the fiscal year, 2022. The rater may revise even this number after next month's print.

"Risk of Inflation overshoot is indeed a problem across the world due to a sharp pick up in commodity prices and rising shipping costs etc. In India this seems to be percolating to consumer prices as well," D K Joshi, Chief economist of Crisil told Moneycontrol. "If this trend continues, RBI s leeway in maintaining an accommodative stance will be curtailed," Joshi said.

SBI's Ghosh said too spoke on the same lines.  The ravages after the second wave of the pandemic and location-specific lockdowns in major Indian states have further dislocated supply chains even in rural areas which is going to manifest in rising prices on essentials, Ghosh said in SBI's research report. Cumulatively, this could significantly ratchet up core inflation, Ghosh said.

"Once that happens on a durable basis, it would be impossible for the MPC to look through inflation pressures and remain supportive of growth, given its primary mandate of ensuring price stability," said Ghosh.

"We now expect CPI to overshoot RBI’s estimate of 5.1 percent in FY22. This will be largely driven by higher core inflation (already at 6.6 per cent) and likely to average 6.2 per cent in FY22," said Sameer Narang, Chief Economist at Bank of Baroda. "While MPC will continue to focus on growth, an upward revision in inflation trajectory implies discussion on accommodative policy exit will also be on the table," Narang said. 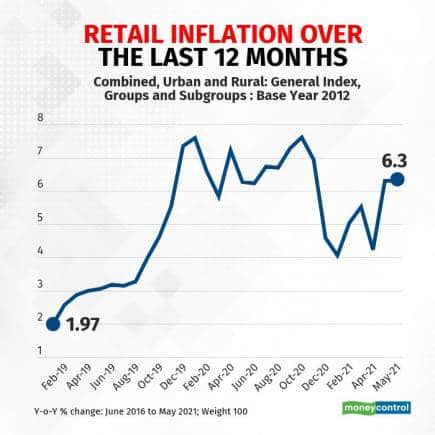 In the meantime, economists are debating whether the current state signal stagflation.

However, not all economists agree with this view. "It is technically not. Conditions look like it though. Besides, how high should inflation be to call it part of stagflation," asked Madan Sabnavis, chief economist of CARE rating agency.

Sabnavis believes that until the MPC makes sure the growth won't slide further, they will continue with current (growth supportive) stance.

"A 6.3 per cent inflation is high but not like the double-digit numbers we had before. This is one month number and probably next month too will be 6 per cent plus. Problem is fuel which had strong secondary effects," Sabnavis said.

The RBI has cut the key lending rate, repo, by 250 basis points (bps) since February, 2019. It has retained the repo rate, at which it lends short-term funds to banks, at 4 per cent in the last six consecutive monetary policies. The  GDP growth, which showed improvement post the first wave, is yet again facing challenges due to the second wave.

The RBI has lowered the growth projection to 9.5 per cent for FY 22 from 10.5 per cent before. In the June policy review too, the RBI said the focus is towards a growth-supportive accommodative stance "as long as necessary". But economists high that price stability is the primary objective for the central bank and the central bank can't ignore high inflation if persists for a prolonged period.

This year, the Covid second wave has once again disrupted supply chains. Inflation now is more of a supply-driven problem rather than a demand-driven.  "...repairing the supply chain remains the top priority on which the RBI has little control," said SBI's Ghosh. Even then, the accommodative stance will have to be revisited if high inflation persists over the next few months. The June CPI inflation number will be watched closely.