Analysis | PSB privatisation: Will there be takers for NPA-ridden government banks?

Most of the mid-sized government banks have high bad loans on the books, making it a risky bet for potential acquirers. But building a bad bank can change the scenario.

The proposal to define ‘strategic sectors’ was announced by Finance Minister Nirmala Sitharaman as part of the ‘Aatmanirbhar Bharat’ package. (Image: PTI)

Ever since Union Finance Minister Nirmala Sitharaman announced her plan in the Union Budget 2021 to cut government stake in two more public sector banks (PSBs), the market is abuzz with speculations on the likely names that could end up on the list.

Logically, the market chatter intensified after a Reuters report on February 15 said that four banks have been shortlisted for privatisation.

Moneycontrol could not independently confirm this report. But, according to a CNBC TV18 report, media reports saying 'govt shortlists four mid-sized state-run banks for privatisation' are not correct.

Meanwhile, the speculations have fuelled a rally in the stocks of these likely target banks with each stock jumping by over 10 percent on February 16 as investors lapped up the shares.

While there is no clarity yet on the government’s plan, here is an analysis that examines the background and financials of the banks that are mentioned in the Reuters report. 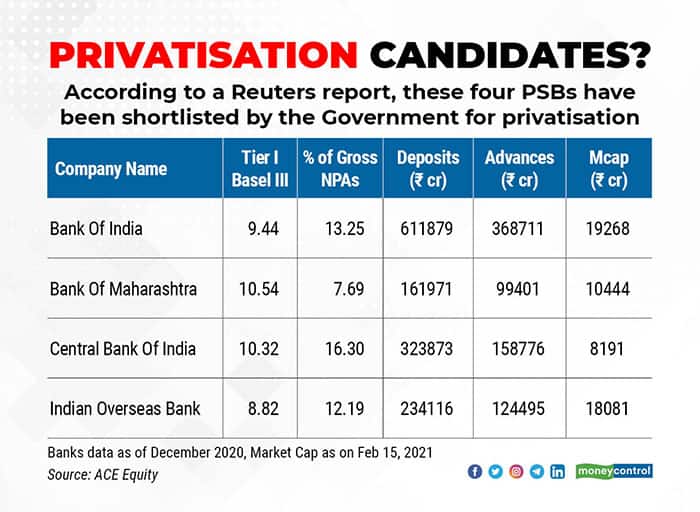 BOM has been in the news for potential acquisition rumors for long. Started on September 16, 1935, during the wave of Swadeshi movement, BoM has its stronghold in Maharashtra’s industrial belt. It is a profitable bank with a market capitalisation of Rs 10,443 crore as of December 2020. The government holds 93.33 percent shares in the bank. But, the Gross NPA levels of the bank is high at 7.69 percent in the third quarter while net NPAs stood at 2.59 percent. It has a provision coverage ratio of 90 percent. BoM has about 13000 employees and 1,874 branches as of February 2021.

Will it be a good bet for a potential acquirer?

Well, the significant presence and loyal clientele in Maharashtra’s industrial belt and profitable balance sheet makes the bank attractive for potential acquires, say a big NBFC which wants to transform into a bank or an existing private bank that wants to expand its business. But, the high NPAs will be a big drag.

Compared to BoM, BoI is a much larger bank with a market cap of Rs 19,268 crore and total branches close to 5,300 and workforce of about 50,000. Its net profit jumped over fivefold to Rs 541 crore in the third quarter ended December 2020 on lower provisions. But, what is worrying about BoI for a potential acquirer is the asset quality. At the end of the third quarter, BoI has total gross NPAs of 13.25 percent as against 16.3 percent in the year-ago period. In value terms, gross NPAs were Rs 54,997.03 crore, lower than Rs 61,730.54 crore.

Should a buyer look at BoI despite the heavy stock of existing bad loans?

Well, if the proposed bad bank becomes a reality, the PSB may get a deal to shift the existing NPAs off its book, making it an attractive buy.

Among the four, Central Bank of India is probably the oldest. It started operations way back in 1911 and has strong links with the Swadeshi movement. The bank has close to 4,659 branches and about 33,000 employees. It has a market cap of Rs 8,190 crore. The bank posted a nearly flat rise in net profit at Rs166 crore in Q3, FY21. But, like other banks, Central Bank of India too faces huge asset quality pressure. In fact, among the four, Central Bank has the highest Gross NPA percentage—at 16.3 percent as of December 2020.

Is it a good buy for a potential investor?

Well, if the NPA stock is addressed by the bad bank, yes. Else, the buyer will inherit big chunk of toxic assets for which there is no easy solution. They will have to throw good money after the bad, lot of it.

Started in 1937, IOB was one of the 14 major banks that were nationalised in 1969. It operates in 4 countries -- Singapore, Hongkong, Thailand and Srilanka. IoB has the lowest Tier I capital adequacy ratio among all four (8.82 per cent) and has gross NPAs of 12.19 per cent.

Is it a good bet?

IoB, with its strong customer base in south, will be a right fit for a buyer, provided the bad loan problem is addressed. It has 35,00 branches and 26,000 employees.

It is not the financials alone. Unlike the mega-merger exercise among PSBs carried out last year, the privatisation of PSBs is a politically sensitive move. Bank employee trade unions have already raised objections against the proposed privatisation move. Trade unions continue to have a say in the running of these institutions, which will force the government to convince the trade unions about the merit of the privatisation agenda. “All these banks are running profitably and have strong business, cultural connect with their respective regions. What is the logic of selling these banks to private owners?” asked CH Venkatachalam, secretary of All India Bank Employees Association (AIBEA), a prominent trade union. The speculations with respect to privatisation has impacted the morale of the employees and caused concern among the customers of these banks, Venkatachalam said.

What is the way ahead?

The bottomline is this: If the government exhibits strong political will (convincing the influential trade unions) to proceed with the privatisation agenda, it will have to first implement the bad bank plan to address the problem of NPAs in PSBs and clean up their balance sheets. If the books are healthy, there could be potential takers for these banks among NBFCs and business houses for these banks. The government, along with the RBI, will have to then work out reasonable terms for the privatisation of these banks. Buyers will be more interested in taking over healthier, well-run banks rather than taking up the burden of weak, poorly governed banks. PSB privatisation has been a long-pending promise. Though the PJ Nayak panel had recommended this way back in 2014, there has been no progress yet.  This time, FM Sitharaman has presented a bold roadmap to kick off the privatisation programme.

But the challenge lies in the implementation.