Liquid funds, which are used by companies to park their surplus cash, saw inflows of Rs 6,938 in November versus inflows of Rs 93,203 crore in the preceding month

November was quite volatile for the mutual fund industry. On one hand, outflows from credit risk funds continued, while inflows into equity funds fell as much as 85 percent.

Net inflows into equities stood at Rs 933 crore last month, a three-year low and a drop of nearly 85 percent month-on-month, according to data released by the Association of Mutual Funds in India (AMFI). Equity ETFs registered inflows of Rs 2,954 crore in November compared to Rs 5,906 crore in October. "Equity net inflows have fallen sharply in November due to profit-booking by investors," said NS Venktatesh, CEO, AMFI.

Amid intermittent bouts of volatility, Nifty and Sensex ended November with gains of 1.50 percent and 1.20 percent, respectively.

Credit risk funds continued to suffer due to huge outflows. Last month, the 44-player mutual fund industry witnessed outflows of Rs 1,899 crore from credit risk funds in November, an increase of 37.4 percent from the month ago period.

Since the beginning of the credit crisis in July last year, credit risk funds have consecutively seen outflows every month. Continuous outflows from this category have led to fall in AUM.

"Credit defaults in NBFCs has impacted credit risk funds. The fear of losing out more money has prompted investors pulling out," said a head of fixed income from a private fund house. 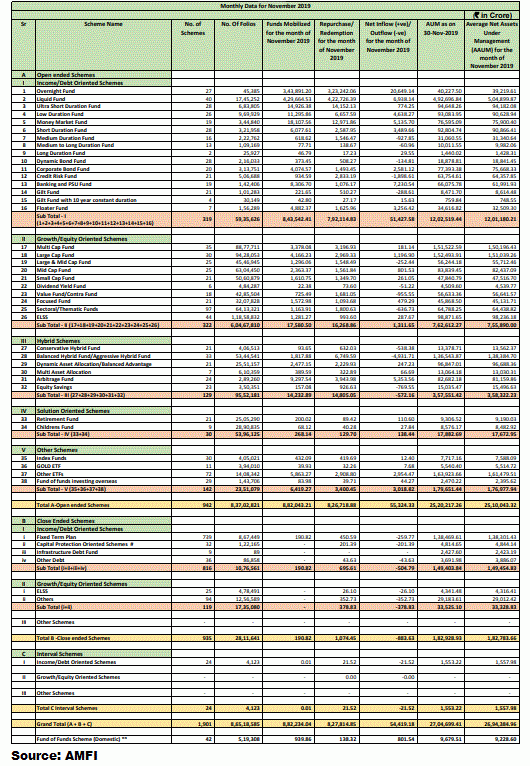 Another category under income and debt oriented schemes -- liquid funds -- saw a massive MoM fall in terms of inflows.

Liquid funds, which are used by companies to park surplus cash, saw inflows of Rs 6,938 in November compared to inflows of Rs 93,203 crore in the preceding month. “Some liquid fund investors may have shifted to overnight funds due to the implementation of exit load in liquid funds,” Venkatesh said.

The mutual fund industry was suffering due to large exits by institutional investors from liquid funds, particularly in the first seven days.

From October 19, SEBI allowed fund houses to impose graded exit load on liquid fund investors who exit the scheme within seven days from the date of purchase.

It allowed fund houses to impose an exit load of 0.007 percent on investors if they redeem their investment within a day.

This means investors redeeming after a day will have to pay a higher exit load than those redeeming on the seventh day.